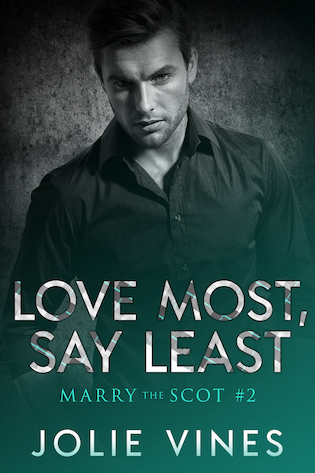 
The boy who has everything meets the girl who has nothing… when she nearly runs him over.

James Fitzroy’s life could be called charmed. With an ancient name and a sprawling country estate, only an arranged marriage stands between him and his billionaire inheritance. But appearances are rarely what they seem. Traumatised after a tragic accident, speaking doesn’t come easily to James, and he cares little for anything, including who he weds.


Until the screech of brakes awakens him to all he can’t have.
Beth Grace might be descended from criminals, but she’d never follow in their footsteps. Apart from the one time she did. Now, even an invitation to go driving in Scotland with the world’s most handsome man can’t derail her from her plan to pay her dues. Besides, despite the startling chemistry, women like her don’t get to date earls. She couldn’t be further from what he needs.
Two broken souls can make a whole. There’s just the matter of a wedding in the way.


JOLIE VINES is a romance novelist who lives in the South West of England with her husband and toddler son.
From an early age, Jolie lived in a fantasy world and is never happier than when plot dreaming. Jolie loves her heroes to be one-woman guys. Whether they are a huge Highlander, a touch starved earl, or a brooding pilot, they will adore their loved one until the end of time.
Her favourite pastime is wrecking emotions then making up for it by giving her characters deep and meaningful happy ever afters.
Want to contact Jolie? Drop her a line at jolie@jolievines.com, or find her on Instagram, Twitter, and Facebook. She loves hearing from her readers.
Sign up to her list to get The Rival novella – a prequel to the Marry the Scot series for free, as well as being the first to know about new releases, giveaways and promotions. https://www.jolievines.com/newsletter