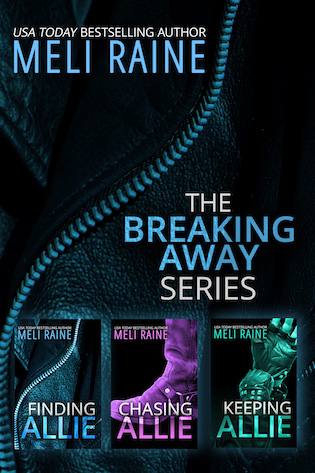 The son and stepdaughter of rival drug dealers, Chase Halloway and Allie Boden know the odds are stacked against them, but love doesn’t care about odds. Love only wants to find a way.
Chase Halloway knows he’ll take over his father’s empire when old Galt Halloway’s done, but he has dreams. Plans that have nothing to do with the drug ring his father’s so carefully built since Chase’s mom died years ago. Untamed and unmoored, when he sees Allie for the first time he realizes maybe the future doesn’t have to be so lonely…
Protected by Chase during a blow-out brawl in her stepfather’s bar, Allie can’t believe the tattooed, muscled man who has eyes only for her really wants her…forever. With a past marred by her mother’s death and a stepfather who won’t let her leave for sinister reasons she doesn’t understand, she wants to choose Chase and her own fate.
Drawn together by an attraction so strong they can’t find words for it, and unable to resist a physical temptation so strong they can’t deny it, can Chase and Allie’s love survive kidnapping, murder, false accusations and more?
The Breaking Away Series Boxed Set contained the entire romantic suspense trilogy: Finding Allie, Chasing Allie, Keeping Allie. Each is a full-length novel, and by the end of book three Chase and Allie get the happily ever after they so richly deserve. 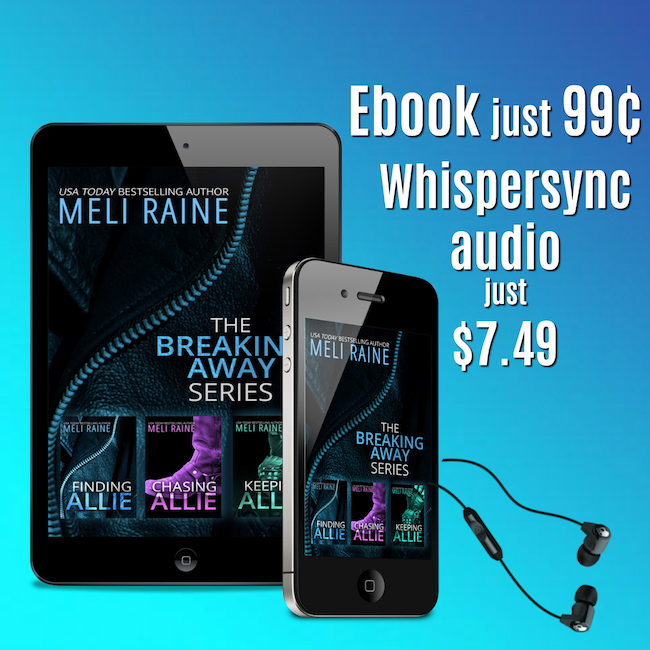 Audiobook:
Audible / iTunes / Amazon Audio / Kobo Audio / Nook Audio / Google Play Audio
—
EXCERPT:
He’s warming me up with just his look.
“It’s okay.” Finding my voice is harder than you’d think. “It really is,” I say, sighing. “I…I like it.” I’m so afraid this is it, that he’s stopped for good and that I’ll never, ever feel those hands on my body again, those lips on mine, that tongue teaching me how holy a kiss can be.
“You do?” His voice is deep and low, like a man who wants something and quickly realizes there’s a strong chance he can get it.
“I do.” Oh! The wedding words. I turn three shades of pink as I make the connection in my mind, and Chase smiles, laughter carrying on the wind.
“Let’s not get ahead of ourselves,” he adds, eyes twinkling. His fingers flex and he shifts his hips, looking up at the stars and away from me.
“No, no, I didn’t mean…I wouldn’t presume…I…” Stammering and yammering, I can’t shut up, protesting that I wasn’t thinking about marrying him, for goodness sake. Who marries a drug dealing motorcycle club vice president?
“You wouldn’t marry someone like me, you mean,” he spits out. I flinch. Can he read my mind? We seem more deeply connected than either of us ever realized.
“I didn’t mean it that way, Chase. Really!” The world begins to spin and the happy moon suddenly turns sinister. How did this wonderful night become so bad, so fast? Are we arguing? This feels like an argument. I’ve never argued with a guy before, and it feels awful. Like I did something wrong and I have no idea what, but will do anything to fix it. All I want is for Chase to pull me into his arms again but instead Chase’s eyes go cold.
What just happened?
“You have a thing against MC?”
“What’s MC?”
He snorts and kicks the dirt. “Motorcycle club.”
“Oh, um…” The question catches me off guard, and butterflies live in my stomach by the thousands now. The night air feels like it is brushing against every part of my skin where Chase just touched me and is erasing all the amazing feelings we just shared. My body is screaming, my brain’s on fire and somehow, I’ve offended him.
Way to go, Allie. 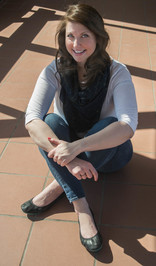 Meli Raine writes romantic suspense with hot bikers, intense undercover DEA agents, bad boys turned good, and Special Ops heroes — and the women who love them. Meli rode her first motorcycle when she was five years old, but she played in the ocean long before that. She lives in New England with her family.
Website / Goodreads / Facebook / Twitter / Newsletter / Bookbub