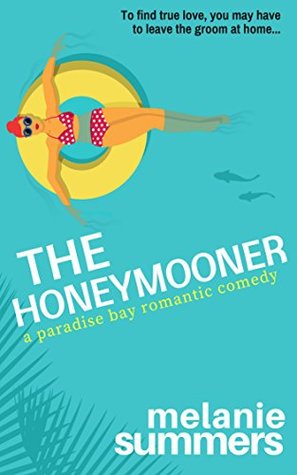 ABSOLUTELY LOVED IT! The Honeymooner is a must read…I didn’t want this book to end. Get it today and start laughing. ~ Jilleen, SeasideBooknook.com

A must read! More than 5 stars! Melanie Summers could write a menu and I’d read it… I love her stories, they are all heart and soul. All I can say is I want to move to Paradise Bay! ~Lori Zenobia, Goodreads Reviewer

From bestselling author Melanie Summers comes the wickedly funny, ridiculously romantic spinoff of her highly-acclaimed Crown Jewels Series…
Twenty-eight-year-old workaholic Libby Dewitt lives by the motto ‘if you fail to plan, you plan to fail.’ She’s finally about to start her dream life with her steady-as-a-rock fiancé, Richard Tomy. Together, they’re the perfect power couple—right down to the fact that he’s agreed to use their honeymoon to help further her career in mergers and acquisitions. But ten minutes before the wedding, her dreams dissolve via text message.
Devastated and humiliated, Libby escapes to Paradise Bay alone. She’s got two goals for her trip: to devise a plan to get Richard back and to convince resort owner Harrison Banks to sell his property to her company. Unfortunately, when she arrives, she discovers that tall, dark, and built, Harrison is not about to make anything easy for her.
Instead, he derails her plans while at the same time, bringing out a side of Libby she’s kept carefully tucked away—a carefree, adrenaline junkie. After a few days together, Harrison’s got her wondering if the life she always wanted was meant for some other girl. Suddenly, Libby must decide which version of herself she wants to be.
Will she go back to her comfortable, safe life, or risk everything to be with the only man who’s ever made her feel truly alive?

Goodreads / Amazon
—
FREE for a limited time only!
—
EXCERPT:
“Oh my God…did we…?” I press the sheet to me again, gripping it so tightly, my knuckles turn white.
“You don’t remember? It was amazing. The earth moved. And you—you were loud enough that we probably cleared out the entire resort.” He grins at me, then rolls off the bed and starts across the room, giving me a view of his muscly back and behind. Those are some seriously tight shorts.
No, Libby! Do not focus on his taut buttocks! You are not that kind of girl. “I’m very sorry, but I’m afraid I don’t remember any of it.”
“None of it?” he asks.
When I shake my head, he says, “That’s a real crime because it was the best night you’ve ever had. You told me as much right after round three.” Opening the mini-fridge, he grabs a bottle of water and takes off the lid. “At least I have it all on video.”
“What?!” My pulse speeds up, and I suddenly feel both hot and dizzy. What have I turned into? Some kind of hussy? Or worse—my mother?
“I didn’t think it was a good idea, but you were pretty insistent.” He shrugs, then crosses the room and holds the bottle of water out to me.
I take it cautiously, then shrink back from him a bit. Why would a man this hot do whatever predictable, boring old Libby Dewitt said to do?
In an instant, it all makes perfect sense. My heart sinks and I let out a loud groan. “You’re a gigolo, aren’t you?”
“What?”
“Listen, I don’t know what I told you last night, but I can’t afford to pay you. I’m a little low on cash at the—”
“I’m not a gigolo.”
“Then why would you…?” I don’t really know how to put this. Why would someone as hot as you sleep with a very plain Jane like me?
“Why would I what?” He folds his arms across his broad chest.
My words come out rushed. “Sleep with someone like me.”
“Are you kidding right now?” he asks, raising one eyebrow.
“No, I’m afraid not.” I shake my head, then wince because my brain is pounding and because I really don’t want to hear his answer. I’ve had enough rejection for one weekend. Before he can say anything, I take a wild stab at it. “Now I get it, you’re one of those guys with extremely low standards. The type who’ll sleep with anything with a pulse.” I gasp again. “Oh my God. I probably have an STD by now, don’t I?”
“Ouch,” he says, rubbing at his chest. “You’re pretty mean when you’re sober.”
“Sorry. I don’t mean to insult you. I’m honestly just very confused.” I sigh and close my eyes for a second, unable to stand the look of hurt in his strikingly brilliant hazel eyes. “Maybe it would be best if you just left. I’m really not myself at the moment.”
“Okay, but it might make more sense if you left.”
“Why?” I ask, opening my eyes again.
“This is my room.”

Melanie Summers also writes steamy romance as MJ Summers.
Melanie made a name for herself with her debut novel, Break in Two, a contemporary romance that cracked the Top 10 Paid on Amazon in both the UK and Canada, and the top 50 Paid in the USA. Her highly acclaimed Full Hearts Series was picked up by both Piatkus Entice (a division of Hachette UK) and HarperCollins Canada. Her first three books have been translated into Czech and Slovak by EuroMedia. Since 2013, she has written and published three novellas, and eight novels (of which seven have been published). She has sold over a quarter of a million books around the globe.
In her previous life (i.e. before having children), Melanie got her Bachelor of Science from the University of Alberta, then went on to work in the soul-sucking customer service industry for a large cellular network provider that shall remain nameless (unless you write her personally - then she'll dish). On her days off, she took courses and studied to become a Chartered Mediator. That designation landed her a job at the R.C.M.P. as the Alternative Dispute Resolution Coordinator for 'K' Division. Having had enough of mediating arguments between gun-toting police officers, she decided it was much safer to have children so she could continue her study of conflict in a weapon-free environment (and one which doesn't require makeup and/or nylons).
Melanie resides in Edmonton with her husband, three young children, and their adorable but neurotic one-eyed dog. When she's not writing novels, Melanie loves reading (obviously), snuggling up on the couch with her family for movie night (which would not be complete without lots of popcorn and milkshakes), and long walks in the woods near her house. She also spends a lot more time thinking about doing yoga than actually doing yoga, which is why most of her photos are taken 'from above'. She also loves shutting down restaurants with her girlfriends. Well, not literally shutting them down, like calling the health inspector or something--more like just staying until they turn the lights off.
She is represented by Suzanne Brandreth of The Cooke Agency International.
Website / Goodreads / Facebook / Twitter