RELEASE BLITZ: Spirit of the King by Bruce Blake 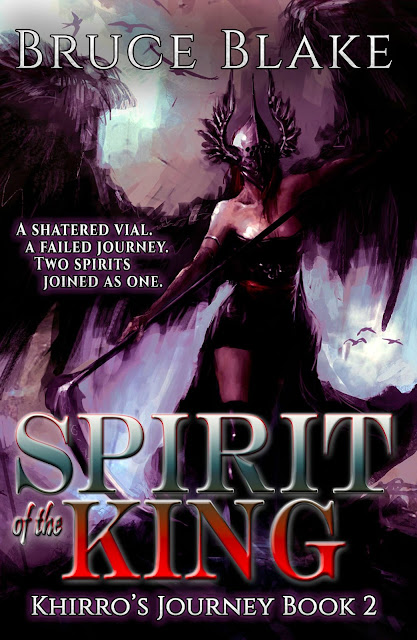 A shattered vial. A failed journey. Two spirits joined as one.

An army of dead men led by a sorceress with an unquenchable lust for power occupies the kingdom of Erechania. The kingdom's traitor-king seeks to redeem himself, but the sorceress has stolen his son, his last reminder of the wife he lost. Neither the king nor his enemy can know the importance of the role the child will play.

The Necromancer's last act of magic joined a fallen king's spirit with Khirro's, making him the vessel carrying the kingdom's hope. But the haunted land of Lakesh, the outlaw city of Poltghasa, and the enemy country of Kanos lie between him and his homeland. Dangerous creatures and murderous men seek to end his quest, but he is also stalked by something far deadlier:

An assassin he once loved.

The giant kicked a sheet of sand at his face; Khirro averted his eyes and dove aside, concentration broken by the club thumping the sand where he’d just stood.

The magician answered, but Khirro didn’t hear his words as the wooden club scraped across his breast piece. He ducked and dodged. Sweat ran down his face as he searched for an opening to get to the beast without forfeiting his life in the process. The Mourning Sword cut the air with no more success than the first time, but the giant hesitated, giving Khirro a second’s respite from attack. He struck a third time, blade glancing ineffectively off the giant’s weapon, but it gave him a moment’s satisfaction for his steel having touched something.

The giant roared its ear-splitting war belch and renewed its attack, spinning Khirro about and forcing him back toward the edge of the forest. Beyond the creature and its swirling club, he glimpsed Athryn stripped to the waist, gesturing and chanting before the giant’s massive body blocked his view.

Another barely-avoided blow sent Khirro to the sand. He held the Mourning Sword up knowing he wouldn’t be able to deflect a blow, and that one direct hit would be enough to end the fight, likely his life. The giant was too strong. What a fool he’d been to think he could hold off the beast on his own.
Why isn’t Athryn helping?

The giant loomed beyond his sword’s reach, a string of saliva hanging from its lips like a dog left unfed for weeks. Khirro tensed, hoping to somehow survive the attack, but instead of raining another blow down on him, the giant stopped, listened.

Foreign words floated to Khirro on the sea breeze, words he didn’t recognize but he knew meant Athryn was casting a spell. The giant also seemed to realize what the words were for.

Khirro scrambled to stand, feet slipping in the loose sand, but the creature pushed him back with the tip of his club, knocking breath from his lungs in the process and leaving him no choice but to watch the giant set his club aside and pick up a boulder bigger than the first. It hoisted the stone above its head, bending its elbows like a living catapult.

After all that had happened during their journey, and despite being a soldier in the King’s Army, Khirro still didn’t considered himself a warrior or think he possessed a killer’s instinct, but he realized this might be his last chance to prove to himself he could be.

As the giant heaved the boulder, Khirro leaped up, lungs desperate for air. The Mourning Sword glowed red in anticipation of the blood to come, the radiance brightening as Khirro sank the blade’s tip into the beast’s lower back. The giant howled and jerked away, sending Khirro tumbling back, but not before he’d embedded the sword to its hilt, skewering kidney and lung and heart.

Khirro dug his hands into the sand and pulled himself out of the thrashing beast’s path. The giant stumbled, reaching around in an attempt to grasp the sword’s hilt, its fingers brushing it without finding a hold. It spun a circle like a dog chasing its tail, but the damage proved too much, and the beast dropped to his knees. The ground shuddered under its weight when it pitched forward, face first into the sand, a trickle of blood seeping from the wound in its back.

A kingdom torn by war.

A curse whispered by dying lips. A hero born against his will. Khirro never wanted to be anything more than the farmer he was born to be, but a Shaman's curse binds him to the fallen king and his life changes forever. Driven by the Shaman's dying words, Khirro's journey pits him against an army of the dead, sends him through haunted lands, and thrusts him into the jaws of beasts he wouldn't have believed existed. In one hand he carries the Shaman's enchanted sword, a weapon he can barely use; in the other he holds a vial of the king's blood, the hope of the kingdom. His destination: the Necromancer's keep in the cursed land of Lakesh. Only the mysterious outlaw magician can raise the king from the dead to save them all from the undead invasion, but can Khirro live long enough to deliver the vial?

Can a coward save a kingdom?

Bruce Blake lives on Vancouver Island in British Columbia, Canada. When pressing issues like shovelling snow and building igloos don't take up his spare time, Bruce can be found taking the dog sled to the nearest coffee shop to work on his short stories and novels.

Actually, Victoria, B.C. is only a couple hours north of Seattle, Wash., where more rain is seen than snow. Since snow isn't really a pressing issue, Bruce spends more time trying to remember to leave the "u" out of words like "colour" and "neighbour" than he does shovelling (and watch out for those pesky double l's). The father of two, Bruce is also the trophy husband of a burlesque diva.