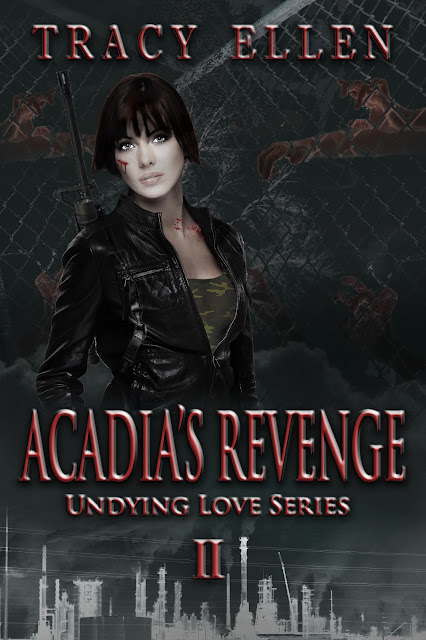 Acadia King never imagined the catastrophic event she’d diligently planned years for would be an infection turning normal people into rabid crazies, nor had she ever thought surviving a global pandemic would be easy. But now that the worst nightmare has happened, Acadia is damn sure defending her home against the homicidal infected is her number one priority. Nowhere near the top of that priority list is her personal issue of a younger football player inexplicably proclaiming his love, even if he's the hottest man left on earth. Acadia's stubborn determination to ignore her personal feelings for Rod works, but then tragedy strikes. Tryg Johnson, the psychopathic leader of the Iron Fists biker gang, is back and proves he'll do anything to get revenge on Acadia.

Now Acadia is all about getting personal! 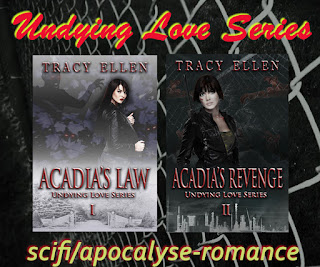 Wrapped tightly in Rod’s strong arms, I pretended nothing existed but us. There were no problems--not the infected, not the refugees littering my farm, not the gap of a dozen years in our ages, and not Rod’s sweet, if idiotic, declaration of love after knowing me less than one day.

Try as I might, I couldn’t pretend for long. At this point, life was nothing but problems, and the problems weren’t going away anytime soon. Regardless what I’d said in my little speech, I knew in my gut life was about to get much worse for us all.

Even if I wished it could be different, I’m also too practical to believe in love at first sight. Rod can use any facile arguments he wants to try and convince me otherwise, but I highly doubt he’ll succeed.
Still, when Rod lowered his mouth to mine, I lost myself in his kisses. My desire for him roared back to life with every lick of his talented tongue. In seconds, his mouth brought me to that hazy place where nothing matters except getting our hands all over each other, and the throbbing need begging to be fulfilled between my legs.

This wasn’t love, but lust.

Now lust I’ve got no complaints about.

I’ve missed lust in my life.

Rod gave my ass a decisive slap, and I yelped in surprise, jumping away from him.

Glaring, I rubbed my stinging butt cheek. “What the heck was that for?”

“I wanted a little hug before we left, was all.” Rod grinned, his teeth a flash of white in the shadows. “Listen, my precious, sex-starved pixie,” he reached out and ruffled my short hair, “as much as I look forward to our next five seconds of lovemaking, especially if it’s you mounting me against a barn wall in public, we need to go get that highway cleared.”

“Oh my God, will you let it go already?” I whispered fiercely, knocking his hand away.

I swiveled my head to be sure we hadn’t been overheard, even as I blushed at the reminder of my behavior in the shower. After that performance, Rod had to believe I was a head case. My emotions had been all over the place. At his teasing reminder, I was mortified all over again.

“Sure, in about ten years or so.” He shook his head and whistled softy. “That ass of yours? It seriously does things to me, woman.”

At the sound of his low laughter, I was thankful for the dark night surrounding us to hide the fiery heat flooding my cheeks.

“You had to go and ruin this moment, didn’t you?” I accused while walking away in the direction Sean had taken.

Not that I could blame Rod for his gloating. I’d jumped on him in the shower, rode the man for all of fifteen seconds (not five!) like there was no tomorrow, which for all we knew there wouldn’t be, experienced an orgasm so intense the top of my head still felt blown off, and then left him alone in there. Talking about bad manners, I hadn’t even cared if he got off or not.

“Me ruin a moment?” Falling in beside me and throwing a comradely arm over my shoulders, Rod drawled, “You’re the one who hopped away faster than a scared, nakey bunny.”

Okay, so maybe jumping off him and running out of the bathroom without even drying off hadn’t been the most dignified of exits, but comparing me to a scared, nakey bunny was harsh.

“Sorry I didn’t dawdle on your knee,” I bit out, flinging off his arm. “I thought it was more important Bobby heard it from me, and not Uncle Coop, that I’d killed his stupid father.” I raised my voice over his laughter, “As well as show my supposedly dead face at the first meeting of everyone gathered on King Farm.”

I started to walk away, but Rod grabbed my shoulders and swung me to face him.

“You were running away from your feelings.” He made the statement in his quarterback voice that brooked no opposition, tipping my chin up with a knuckle. At my stony stare, he laughed again, but softer, his eyes narrowing thoughtfully. “I’ve got my work cut out for me, don’t I, teaching you how it all works?”

I watched him warily. “How what all works?”

He sighed and tapped my chin with a long finger. “Acadia, if you think that was my knee you were dawdling on, you’ve got a lot to learn about sex.”

The first book in the Undying Love Series, Acadia’s Law is a thrilling story on the eve of the zombie apocalypse.

Ask yourself: How would YOU survive an epidemic?

Acadia King is a young widow about to discover her inner badass when she is suddenly faced with answering this question, and in ways she could have never dreamed possible at the start of her evening. It has been two long years since the death of her husband. Caving to the pressure from her good friends to go on a blind date, Acadia’s plan for a night of simple pleasure is about to get complicated. Not only does Acadia meet a younger, impossibly hot football player named Rod, but the hotel is host to much more than a fun Casino Night. A viral epidemic that turns people into homicidal crazies has begun to sweep across the Twin Cities and the hotel bar erupts into a savage battleground. Acadia and Rod, along with Rod’s two offensive linemen and a blonde groupie, barely escape with their lives. Acadia, having no other choice, reluctantly leads the group back to her home on King Farm.

Overnight, the epidemic tears loose the thin veneer of civilization. Threatened on all sides, Acadia silently vows to protect the family and friends she has left. Her promise is put to the test immediately, but the infected are not the only battle Acadia, Rod, and the other survivors on King Farm will have to fight against. When greed, betrayal, and lawless chaos start to rule, Acadia finds out being tough is one thing, but does she have the skills and strength to be the leader their small band needs to survive? Or will it cost more than she has to give?

Tracy Ellen was born in Indiana to middle-class parents, the third out of five hellions. She often used her supernatural powers to compel her family members to listen to her talk and tell stories. When that tough crowd laughed of their own free will, Tracy knew the world would someday, somehow be her stage. Now she’s a full-time writer living her dream. Tracy’s resided in the Midwest her whole life--in a small town, on a farm, and in the big city. Currently, she lives in the suburbs of St Paul, Minnesota with her husband and family. Stay in touch by checking out Tracy’s website, and then signing up for her monthly newsletter to be notified of new books coming your way, giveaways, and exclusive content. She also has a fetish about giving fun surprise gifts to her lovely newsletter members every edition. (Hint: She hopes that entices you to her website.)