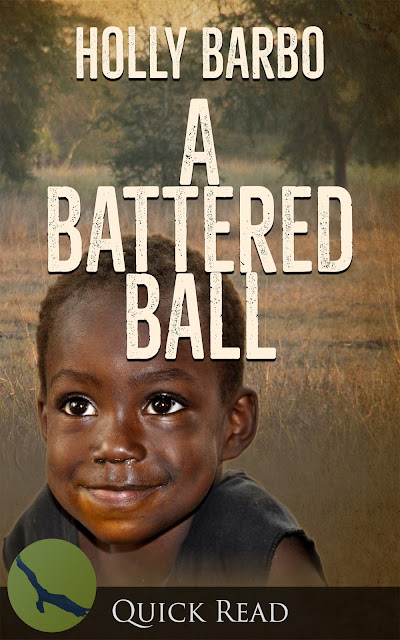 There are many things little Azizi has to learn about, like how the destruction of war can force people out of their homes, or take away a father in a blink. But the most important lesson of all bounces around on the frayed edges of a ball...

The government soldiers chose a moonless night to strike the village. Baakir slept curled against his little brother in the dusty darkness. He woke as his mother touched his shoulder. “We must go. Now!”

The boy didn’t question but rose from the sleep mat and, waking his brother, lifted the child to his feet. There were sounds from the end of the village: a cacophony of harsh shouts and screams. He took Azizi’s hand and hurried to the doorway where his mother crouched, peering out. The flickering firelight from burning huts glinted on her face and the wire jewelry around her neck. Shadowed figures moved around the far huts, silhouetted against the destructive flames.

“Stay low and follow me.” She looked at her sons to see if they understood.

Slipping a bundle onto her back and carrying a second, Kofi melted into the blackness. Baakir was close enough to touch her skirt but didn’t loosen his grip on little Azizi’s hand. The three became part of the moonless night as they dashed for the depression of the wadi and the deep grass beyond. Each knew they could be discovered at any second.

From the darkness of the shallow gully, the three watched as friends and neighbors were hauled out of the huts and, at gun point, were forced into a cluster in the village center. It was dangerous to linger too long. They couldn’t help their friends.

Kofi motioned to her two small sons and, crouching low, the family moved through the deepest part of wadi. During the rainy season the wadi held water, and at night some of the wild animals drank there, but now it was dry so that was one fear they didn’t need to face right away. The rounded rocks at the bottom of the dry stream bed shifted beneath their feet. If they stumbled now and twisted an ankle they would be found, and Kofi feared what would happen to them.

Step by careful step, they made as much haste as was possible. Within ten minutes, the gully ended and the earth rose steeply. Kofi pushed Baakir up the sloughing bank to the top. Picking up little Azizi, she held him as high as she could and whispered instructions to the youngster. Arms above his head, he was in reach of his older brother, who pulled the child to the top. They lay flat on the ground as Kofi sought hollows for her hands and feet, only to have the bank crumble under her weight. They could still hear gunshots and an occasional scream from the direction of the village. Struggling, her breath choppy with her frantic efforts, she finally managed to get her shoulders over the rim and pull herself up.

She hadn’t been this way in about nine years and never at night. Hugging her sons, she whispered her praise, “You are very brave. I’m so proud of you, and I know your dad would be, too.” She stroked their cheeks. “You’re tired but we can’t stop here.”

Hugging little Azizi, Baakir asked, “Where are we going, Mom?”

“We’re going to my childhood home. I still have family there, and it is away from much of the fighting. We’ll be safer there, I think. It is several days away. Come. We need to find a place to rest.”

She got to her feet and, picking up her bundles, she helped her children stand. One more loving touch and a smile for both children and she was moving again. Baakir heard the throaty grourff of a hunting lion in the distance to his left and, swinging little Azizi onto his back, quickened his pace, to be within touching distance of his mother.

At dawn, they hollowed a place in the tall grass. Azizi slid off his back as Baakir sank to his knees. Within minutes, both little boys were curled up and sound asleep, the tears on Azizi’s cheeks drying to leave salt trails that glistened in the morning light.