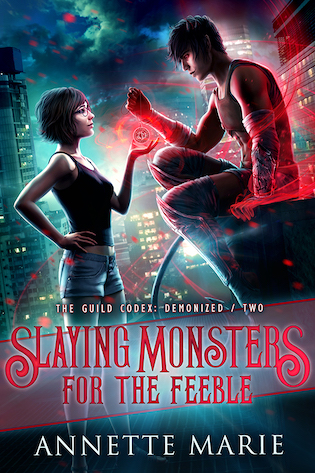 I’m bound to a demon.
For my entire life, I avoided magic at all costs. Now, I’m responsible for a demon who wields magic more powerful than the toughest mage or sorcerer.
Demons are evil.
That’s what my textbooks say. That’s what I see. He’s ruthless, he’s temperamental, he’s cold. But he protects me without fail. I wonder if he’s hiding a heart behind his hostility.
My demon is a monster.
Heartless or not, my contract with him is illegal and beyond dangerous. Together, we need to find a way to send him back to his own world before anyone discovers our secret. If that wasn’t difficult enough, there’s another problem:
My demon isn’t the only monster I should be worried about.

From the author of The Guild Codex: Spellbound comes a new series that will plunge an unprepared young woman into the darkest magic of the mythic world.

Goodreads / Amazon
—
EXCERPT:
I cautiously reached under the neck of my sweater and closed my fingers around the cool silver pendant. Withdrawing the infernus, I settled it on my chest. Darren’s gaze followed it, his expression torn between curiosity and derision.
“Would you like to see my demon?” I asked him. “Right now?” He crossed his arms over his thick chest. “Yeah, let’s see it.”
I ran my thumb across the infernus. Let’s play the game, Zylas.
The pendant blazed with crimson light. Power spilled down, hit the floor, then pooled upward into my demon’s shape. The glow flared into solidity, then faded. Zylas stood still and silent, staring blankly at nothing in a flawless imitation of an enslaved demon with no autonomy.
Despite his ornery defiance, Zylas was nothing if not intelligent. He knew this moment was too crucial for disobedience. Both our lives depended on his acting skills.
At his appearance, gasps flew through the pub and I resisted the urge to shrink. We had everyone’s attention now. They were staring at Zylas, measuring him, judging him, and all he could do was stand there and endure it. At least no one laughed this time.
“Seriously?”
Or maybe the laughter hadn’t begun yet.
“This is your demon?” Darren planted his feet almost on Zylas’s toes, smirking into the demon’s face. “I’ve never seen such a small, pathetic demon in my life!”
The blond woman mock-whispered to the rangy guy, “Do you think she got it for cheap because it’s a runt?”
When Darius, the Crow and Hammer’s GM, had allowed me to join, I’d hoped this guild would be different from the Grand Grimoire, but maybe all guilds were the same. Maybe Zylas and I were too small and weak for anyone to respect.
The barbed tip of his tail gave the tiniest twitch, unnoticed by the watching mythics.
“Forgetting something, dumbasses?” Tori’s acidic snap cut into my thoughts. “Robin and her demon
killed the unbound one on Halloween. Obviously they’re not weak.”
She was defending us?
“Not weak?” Darren scoffed. His hand rose toward Zylas. “This thing couldn’t—” Uh-oh, not good. “Don’t touch him.”
Darren’s reach stuttered, then he boldly rammed his palm into Zylas. The demon didn’t move and Darren stumbled backward, thrown off balance. He shook his head and glanced at his hand, as though confused about how his powerful muscles had failed to affect the shorter, lighter demon.
He thought we were weak. No one here respected us. Unwelcome and disregarded … but what had Tori said? Don’t let him push you around.
I pressed my thumb against the sigil at the center of the infernus. Zylas?
I didn’t need to finish the thought—his hand was already closing around Darren’s throat. With strength
the mythic could only dream of, Zylas swung him off his feet and slammed him down on the bar.
Not too rough, I warned.
He bent Darren backward over the bar. The mythic spluttered and flailed helplessly. Everyone else had withdrawn, shock and fear on their faces. I hated that we had to prove our strength, but this was much better than last time. Zylas was making the proper impression without having to pound half the guild into the floor.
I straightened my glasses, turned toward the bartender, and forced a smile. “Could I have a water, please, Tori?”