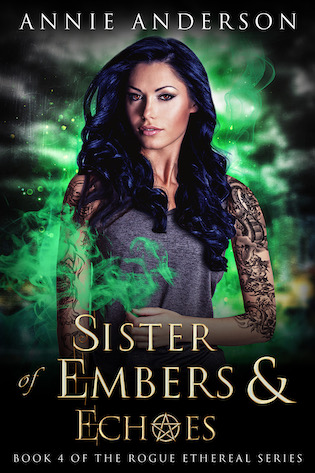 Demons, murder, and a trip straight to Hell…
I thought I’d get a little time off before the veritable poop hit the fan, but fate — or rather the Fates — have other ideas. The witch who tried to have my sister possessed has escaped, and not only do I find him dead, but I don’t have a clue who he was working with. Or working for…
Now I have a Council Member in human jail, a ragtag bunch of stuffy law-abiders to lead, and a solid inkling that the next person on the chopping block is me.
All of that would be bad enough, but I’ve got bigger problems. Maria isn’t quite right after a demon almost stole her body, and I have a hunch it’s going to require a trip to Hell to get it fixed.
Time to sharpen my athames, vacation time is over.

Annie Anderson is a military wife and United States Air Force veteran. Originally from Dallas, Texas, she is a southern girl at heart, but has lived all over the US and abroad. As soon as the military stops moving her family around, she'll settle on a state, but for now she enjoys being a nomad with her husband, two daughters, an old man of a dog, and a young pup that makes life... interesting.
Website / Goodreads / Facebook / Twitter / Pinterest