Please welcome to the blog today, guest author Christine Meunier as she talks about her upcoming release and herself by answering some of my random questions!

We'll start with some fun questions:

If I gave you an elephant where would you hide it?
In my sock drawer!

If you were a cookie, which would you be?
Chocolate chip with extra chocolate.

If I came to your home and looked inside the refrigerator, what would I find?
A lot of home grown pumpkins!

If you were a tree, what would you be?
A tagasaste (Lucerne tree), I’m fodder, shelter and wind protection all in one!

If you try to fail, and succeed, which have you done?
Failed failing!

Why isn't the number 11 pronounced as onety one?
It is when I say it!

Which is the best vacation you've ever had?
I had five weeks in South Africa that consisted of horse riding daily and reading – heaven!

If given a choice, which animal would you want to be? Why?
A horse.  I think they’re graceful and to be able to run that fast would be awesome.

If you were stranded on a lonely beach, what are the five things that you would want to survive?
My bible, guitar, pen and paper and more books!

Now that we know a little about Ms. Meunier, how about we learn about her book?

Blurb:
Horse Country follows the lives of four young women work in the equine industry.  Two instruct horse riding at their parent’s metropolitan riding school, whilst the other two work in the thoroughbred breeding industry.  An amusing and informative novel, it follows the seasons in each industry.

Excerpt:
Glancing out of the school window across the green oval the bored sixteen-year-old sighed, admitting to herself that it would be a lot more exhilarating racing her palomino gelding around the emerald surface, rather than sitting in a stuffy room while their teacher marked the roll.

Calling her name he gained her attention, marking her off before addressing the class.

“Morning everyone.  Over the next fifteen minutes or so, I want you to have a think about what you’re going to do after year twelve.

“Because you’re in year eleven, I know most of you have already picked subjects that coincide with what you plan on studying in University.  But, today I’d like you to have a think about what you want as a job after your studies and list five different possibilities for me.  This year you’re going to do two bouts of work experience, so we will try and line these up with your preferences,” a balding fifty something pedagogue informed the general consensus of bored teens before him.

She smiled to herself, mentally correcting the teacher as she stared at the blank piece of paper in front of her.  She didn’t want a job – she wanted a career.

And she wouldn’t spend fifteen minutes deciding on one either, she’d spent just short of fifteen years deciding on horses.  Flicking through the University/TAFE guide before her she stopped on the letter E, her eyes scanning the page until she came across the word she was looking for.

Finding a list of seven or so careers, she mentally crossed out those that didn’t appeal to her, writing down the few that did before her attention returned to the green surface outside the classroom.

“Horses aren’t a career, dear.  Every girl goes through a stage where she wants a pony; you’ll grow out of it.  Aside from that, it’s too dangerous working with these unpredictable animals.”

It’ll be even more dangerous me working with them if I’m not initially trained to do so.

“Girls that want ponies do quickly grow out of it, generally by the time they’ve discovered the male population.  I own a horse, have had this infatuation for the past ten or so years and don’t believe I’ll be growing out of it anytime soon.  Though, if I am going to do so, surely I’d tire of the animals more quickly if I was put to work with them?”

Aware that this response from her could have turned the conversation either way, she was curious to know if it would have worked to her advantage.

Thankful she had a mother whom was insistent on her following her heart, there’d been no need for her to have a follow up conversation with the older male however, and it was all thanks to her mother’s “little conversation” with the man.  She’d managed to convince the teacher to agree to let her daughter work with horses, at least for the first lot of work experience and that’s all that mattered to the teen.

Grinning, she scanned the list of horse properties in the phone book before her, highlighting those that were close enough for her to consider working at and therefore send a letter to. 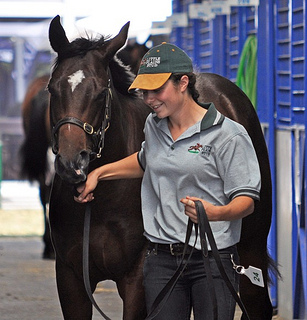 Christine Meunier considers herself introduced to the wonderful world of horses at the late age of 13 when her parents agreed to lease a horse for her.  She started experiencing horses via books from a young age and continues to do so, but recognises that horses cannot be learnt solely from books.

She has been studying horses from age 16, starting with the Certificate II in Horse Studies and is currently undertaking her Bachelor of Equine Science via distance education.

Christine has worked at numerous thoroughbred studs in Australia as well as overseas in Ireland for a breeding season.

She then gained experience in a couple of Melbourne based horse riding schools, instructing at a basic level before heading off overseas again, this time to South Africa to spend hours in the saddle of endurance and trail horses on the Wild Coast.

Particularly passionate about the world of breeding horses, she teaches equine studies focused on breeding, at a TAFE, Victoria, Australia.

She also writes a blog about equine education which you can view at http://equus-blog.com/

Where you can find Ms. Meunier: