A Moment of Reflection: Protecting Your Children

Good morning all my loyal readers. Today I come to you, not with a post promoting one of my books, or another author's for that matter, but with a plea. I am letting you into my pain and suffering, so that hopefully, you'll never experience this. 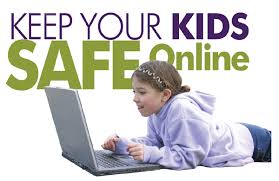 Yes, I have a book releasing in about two weeks, and I should be all about the promo and build up; however, I'm having difficulty with that. You see, earlier this week I had the rug pulled out from under me when our we gathered at the table Monday evening for dinner, and my middle son mentioned getting up for a drink of water about two a.m. As he walked down the hall, he heard talking from his nine-year-old sister's room.

Obviously, this alarmed us, and the questioning began. Let me preface this by saying that my kids are above average intelligence. Proud momma that I am, I brag about them all the time. I know bragging isn't nice, but hey, they're my kids, and they're pretty fantastic. The problem with having children who act like adults more often than not, is that it is easy to forget that they aren't adults. My boys are 17 and almost 16, another factor in the flexibility we've had in the house.

The harsh truth of reality: even super smart kids ACT LIKE KIDS and are naive to the perils of the world.

We've had the talks with them about 'stranger danger' in addition to the emphasis they place on it in the schools. However, as my oldest pointed out, "Mom, you think kids actually pay attention in those assemblies? They're boring, there's better things to think about it." We've also checked in with her in regards to what she was doing on her phone; how dangerous was it for her to be watching How To videos on painting her nails, braiding her hair, or working with polymer clay to make charms?

I can't go into too many details, as there IS a police investigation, but the long and short of the matter is this. My intelligent daughter used her phone (it was a hand-me-down android from when her brother's got upgraded) to download a chat app from the Google play store because she'd "seen an ad." In the wee hours of the morning she became the victim of an online predator, and we only knew because her brother happened to get up for some water.

He gave her a phone number (telling her she didn't have to give him hers, he could just call her - her eyes grew to saucers when I asked if she realized with caller ID, the moment she called it, he had her number anyway). He sent her less than appropriate pictures and sexted with her. He coerced her into sending pictures of herself (again, cue the wide eyes when I stressed how once something goes out on the internet or is transmitted through electronic means, its there forever). Upon talking with her, we found out that, while she hadn't realized she was doing it, she gave out her name, the city she lived in, and the school she attends.

HOW DID THIS HAPPEN? She's smart, she's loved, and yet, she was curious . . . after all, she's just an innocent child. No matter what her curiosity urged her to do or ask, the moment she revealed she was ONLY NINE, the man should have terminated contact with her. He didn't.

So, this is my plea. If you have children in your life, be they your own or your grand kids or your nieces/nephews - you get the idea - take a moment to review the rules. Life can be scary, and they need to know that. Don't just assume because its been discussed in the past, that the words are heeded when temptation arises. It's our jobs as protectors of the children to be vigilant. Otherwise, the predators will win. 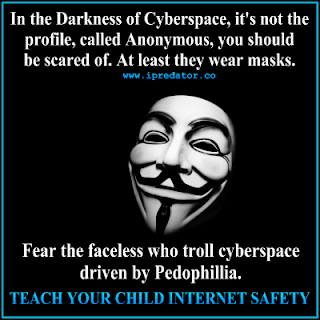