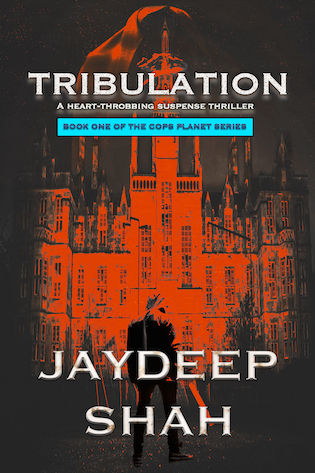 When a couple celebrates their eleventh marriage anniversary at their old mansion far from the city of Naples, Florida, they begin experiencing paranormal events. While trying to find out the truth of what’s happening, they encounter a girl wandering in the mansion.
She is the girl whom the couple never wanted to see again in their life.
Surrounded by their sinful past and the girl’s deathly traps, the couple tries hard to escape the mansion. But they are stuck. There is no way out of the mansion. Every second, they approach their end.
There are many secrets buried in the mansion—about the girl, about the couple, and about their past.
Tribulation is a masterpiece of suspense, a thriller with some mild elements of horror from the imagination of Jaydeep Shah.

Goodreads / Amazon
—
Are you a book blogger?
Join the blog tour here!
—
EXCERPT:
Casie dragged her chair back to the table and sat. Her cell phone rang.
Alex. She read her husband’s name on the screen, then picked up the phone, cooling her brain, inhaling and exhaling twice before answering.
“Where are you?” she asked. She could hear the excitement in her own voice, the eagerness to meet up with him. She was expecting to hear something good in his silvery voice, something to satisfy her ears. But there weren’t her husband’s warm words on the other end. The voice that greeted her was cold and flat.
“Your husband’s dead in your old mansion, outside Villa Village.”
Casie couldn’t believe her ears. “Pardon me. What did you say?”
“Your husband’s dead, at Fuentes Mansion.”
A click sounded as the stranger hung up.
Casie’s mouth remained open as she went blank, not registering the present. The total blankness allowed a memory to rush in. As the flashback played, her eyes widened in clear horror, as if she were witnessing the crime playing live in front of her.
A man and a woman are standing in the center of a room, trapping a girl who keeps begging for her life.
Both the man and woman raise their guns at the girl, threatening her that if she doesn’t sign the paper, she will die.
Stained with blood, the girl signs the paper, and then the woman shoots her in the back.
The girl slightly tilts her head, and the woman smiles at her.
The man walks around to the woman, staring at the girl, and then he shoots her too, in the stomach.
The girl winces, tears running down from her eyes to her neck.
The man and woman’s guns are still fixed on the girl. She looks up at them, her eyes filled with fury.
“Kill me!” she says. “But I promise I’ll return to take revenge for my tribulations.”
Enraged, both of them pull the trigger again. One bullet enters the girl’s breast, the other her stomach. 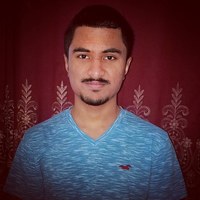 
Jaydeep Shah is the author of gripping romance, horror, and thriller stories. He also writes non-fiction pieces about inspirational topics related to social issues. He is the author of more than half a dozen books.
​
In addition to those books, Jaydeep releases young adult fiction stories under a pen name, JD Shah. The Shape-Shifting Serpents' Choice is his first young adult flash fiction written under that pseudo name and published online by Scarlet Leaf Review in their July 2019 issue.
​
When Shah is not writing, he wanders around Jersey City, spends quality time with friends and family, and cooks delicious food.