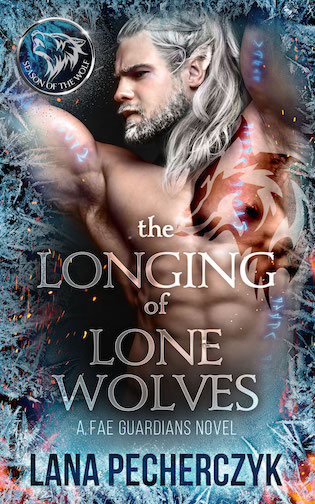 He bargained with her to break his curse. She stole his heart instead.
Rush is a Fae Guardian, a wolf-shifter whose enhanced abilities have made him a ruthless protector of Elphyne. His job is to protect the realm from the human enemy, and to ensure the sins of the past never come to pass again lest magic die forever. But one night of weakness resulted in a curse worse than death – exile. He now spends his lonely time longing to be part of the living, once again protecting them from monsters… until one washes up on the shores of his lake.


Clarke is human. She’s beautiful, feisty, and fierce. She’s also the only person who can see him, speak to him, and touch him.
If he hands her over to the Order, she’s his ticket to having his curse removed. The more he learns about this human enemy, the more he realizes she’s not the monster he’s been trained to believe. In fact, she’s capable of inciting passion he’d never dreamed possible again, but Clarke has a message from the past… sins are already repeating. This time, if they don’t stop the coming evil, it won’t just be magic that dies. It will be everything.


The Witcher meets Beauty and the Beast in this gripping, epic fantasy featuring steamy romance, a dash of time travel, a band of brothers, shifters, fae protectors and their strong willed women from our time. If you love your books full of page turning action, intrigue, and romantic tension then this book is for you. For fans of Kristen Ashley’s Fantastical series or Sarah J Maas’s adult fantasy romance.

Goodreads / Amazon
—
EXCERPT:
As Clarke wended down rocky terrain, the snow melted and revealed fresh dirt and abundant nature. The more they descended, the grumpier she got. Something shifted inside when she saw how the world had changed because of the way she’d lived her old life. Death had been on one side of the mountain and life on the other. Even though she’d had a part, she didn’t want to be lumped in with humans who’d intentionally destroyed the world.
The fae’s words came back to her. “We don’t choose the rules of life, but if we don’t follow them, we’re destined for nothing.”
“You know,” she said as she dodged a divot in the path. “We’ve been walking for hours and you still haven’t told me your name.”
She was also tired, itchy, and hungry.
The fae nudged her between the shoulder blades. She almost lost her footing.
He may have a giant sword, scary mother-fucking teeth, and a powerful body she was sure could snap her in two, but her instinct just wasn’t feeling the fear. He had the ability to control her words and her actions, yet he’d only just used the power. She rounded on him.
“Take these off me,” she demanded. “Free me.”
He looked down his nose and flicked his gaze to the restraints. Her breath stuck in her throat and, for a moment, she thought her instincts needed a serious talking to. But then he moved toward her. Fast.
With a speed that left her breathless, and a flick of his powerful hand, his bone knife sliced through her restraints. Clarke’s fists dropped to her sides.
He leaned forward, his menacing presence only inches from her face. And then he sniffed, nostrils flaring as he trailed his nose along her cheek, jaw and neck. Where he stayed. Hot air puffed out as he exhaled, and goosebumps erupted over her flesh. The tattoo under his eye flared, casting an eerie blue glow as he bared sharp teeth and bit the air, snapping with an audible click.
Clarke squeaked. A tremble of fear skated up her spine.
He raised a brow. “It matters not if you are free. You will not run.”
“And why not? Because you’ll compel me to stay?”
“Because, woman,” he growled, mouth curving into a wild, wicked grin, “I am the reason for those goosebumps on your skin. I am the reason children have nightmares, and in there”—he pointed into the shadowed woods only a few hundred feet away—“there are far worse things than nightmares. I am the reason you will live to breathe another day.”
“So I need a monster to fight a monster, is that it?”
Stupid woman. Stop provoking the beast.
His eyes narrowed and held her gaze.
An unearthly howl came from deep within the woods. At least, Clarke thought it was a howl. It could be any manner of creature in this foreign place. His pet wolf stiffened and raised his hackles.
Watching the woods, the fae stilled in a way that was wholly inhuman. He reached for his sword. Fingers locked tight around the hilt. Knuckles whitened. His ears pricked up straight.
Leaves rustled and trees whispered that night was falling. Then the tension left his shoulders and he let go of the sword. He tossed a self-righteous look at her, and then swaggered away, continuing toward the very forest that had caused him concern only moments before.
Goddamn it. She wanted to stomp her feet.
Smug, smug bastard.
She should leave just to spite him. But where would she go? To the human city that brutalized fae and animals through a barbed wire ceiling? The one the source of her dread came from? No thanks. She had to face facts. She was in a strange place and on her own. There were dangers out there in the night, and her gut said to go with the fae. He had the upper hand.
She hurried to catch up, for she knew something he didn’t. She could make friends with nightmares. She’d had practice. 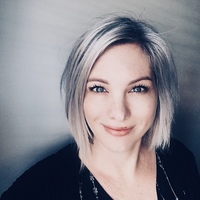 Lana Pecherczyk is an author from Western Australia. She makes a mean chocolate cake and is a fan of 'pro-caffeinating.' She writes kick-ass, action-packed, sometimes funny romance in all sorts of sub-genres - Paranormal, Fantasy, Superhero, Sci-fi and a dash of Contemporary. Basically, if it's got swoony men, strong women and page turning action, then she'll write it. She also wins love by daylight, fights evil by moonlight.
Website / Goodreads / Facebook / Twitter / Instagram / Newsletter