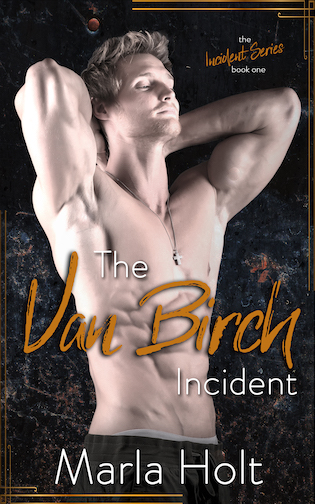 Van Birch: Pop Star. A-list starlet. Off-limits.
Clay Noble has spent the better part of a decade avoiding his taboo obsession: His stepsister Van. In love with her since the first time he’d heard her sing, even shipping himself off to the army couldn’t stop thoughts of her. Now that he’s lost everything in a tornado, he’s forced to move back in with the only family he has left, Van and her dad. Sleeping down the hall from her is forcing every unwanted impulse back to the surface.
Clay Noble: Gorgeous. Infuriating. Untouchable.
Everything Van touches turns to gold with a side of outrageous. When she accuses her manager of sexual assault, the public thinks it’s just another one of her publicity stunts and the backlash is brutal. Wounded, she dashes home to a tornado-devastated Wellville, Kansas to heal and help rebuild, even though the constant stream of social media doubts and threats won’t let her rest. But there’s another reason for her sleepless nights and fevered dreams. Clay is back, hotter than ever, and his lingering glances and stolen moments have her convinced the feelings she’s fought for so long may not be one sided after all.


******
The Van Birch Incident marries forbidden romance, bordering on taboo with a little danger and a guaranteed happily ever after, while exploring how social media and real life collide in a post #metoo world where the internet never sleeps.

Goodreads / Amazon
—
EXCERPT:
Clay didn’t want to crowd her, but he needed to touch her, to make sure she was all right. He warred with himself as he slowly approached her, trying to shove his needs aside and focus on her. When she didn’t flinch away, Clay cupped Van’s jaw in his hand and angled her head so that she met his eyes.
“Hey,” he said in the most soothing voice he could muster. It was not a tone Clay used often. “Are you okay?”
She shook her head and leaned into his palm. Her chest heaved, and Clay covered the hand she held over her heart with his own. Her heart was pounding scary fast. He thought that maybe Van was having a panic attack. She’d had them a few times when they’d been teenagers.
Clay was vaguely aware of Michael, muttering to himself and getting to his feet, over his shoulder. Van’s eyes shot to him, and her breath came even faster. She was going to hyperventilate.
“Don’t look at him,” Clay said, capturing her gaze again. “Look at me. Good. Now, breathe with me.” He stepped in close, putting their hands over his heart. Clay’s heartbeat wasn’t exactly slow and steady, but it was calmer than hers.
Van closed her eyes and matched the rise and fall of her chest to his. Finally, she relaxed into him, her head rolling onto his shoulder.
“I have to give a speech in a few minutes.” Her voice was wavering and muffled by his shirt.
“Take some time. They’ll wait for you,” Clay said and wrapped his arms more fully around her. He wanted to rail at her, to tell her she needed 24-hour security, but now wasn’t the time.
“Thank you,” she said. “I—” She balled her fingers into his shirt.
“Shhh.”
Clay chanced a glance over his shoulder, and Michael had disappeared. Good riddance, fuckwad.
He tightened his hold on Van and held her until both their heart rates had returned to normal. At some point, they’d started to sway together. His thumb caressed the curve of her waist, and he felt Van’s nose graze his neck. A second later, her lips brushed over the hollow of Clay’s throat.
Her balled fist flattened against his chest, and he pressed his palm into the small of her back. The swaying stopped, and when she raised her eyes to his, the shift in mood was so swift and fierce, Clay barely registered the decision to kiss her before their lips crashed together.
Van tasted like whiskey but also hot and sweet in a flavor that was something all her own. Her lips were naturally plump and supple, and her tongue was like velvet against Clay’s as he delved into her mouth again and again. His mind spun with desire as Van’s hands couldn’t decide where to stay. They roamed up and down his chest, over his shoulders and into his hair before starting all over.
The brush of her nails at the nape of Clay’s neck pulled a groan from his chest. She didn’t resist as Clay eased her back against the wall and pressed against as much of her small, soft body as he could. She moaned as he ground against her and kissed his way down her neck.
They’d kissed before. Just the once. It had been intense, but not like this. There had been electricity, but there hadn’t been this bald longing like there was now, like maybe Van wanted him as much as he wanted her. Like maybe she always had but was only just now willing to admit it.
“Clay.” The word was almost a gasp as her leg wrapped around his, pulling him closer as he ground against her again.
God, he wanted her. He wanted her here, now.
Clay was contemplating wrapping her legs around his waist and hiking her skirt up when he heard voices approaching.
He and Van stilled at the same time. Clay’s blood was thrumming inside him, telling him to press on, to pull her closer, to pull
down his zipper, brush aside her panties, and finish this. He couldn’t make himself step away from her. Not yet. Not when he was so close.

Marla Holt believes in second chances, romance, and the radical notion that everyone deserves a happily every after. She's living her own fairy tale, writing contemporary romance novels in her Kansas farmhouse with her husband, three boys, three cats, and flock of imaginary sheep.