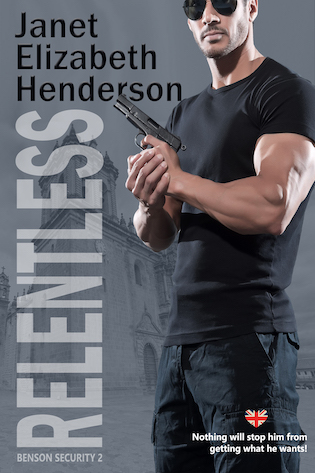 A missing mummy. A drug cartel. An ex-US Army Ranger. And a woman who’s at odds with the world. It’s Relentless…
There’s no hiding the fact that Julia Collins has issues. She’s shy to the point of trying to become invisible. She has OCD tendencies–breaking out in hives if she loses control of her environment. She finds it hard to talk to intimidating men, or more accurately, to any men. A fact that makes working as the office manager for Benson Security particularly difficult–the company is made up almost entirely of huge, intimidating, ex-military men. But none of the men affect her the way Joe Barone does. The ex-Marine is charming, confident, heroic and so sexy it hurts to look at him. Everything about Joe intimidates Julia. And that’s why, when he declares his interest in her, she does the only sensible thing–she hides.
There’s a limit to how long Joe Barone is going to tolerate Julia hiding. So what if she has a few issues? They don’t detract from her many attributes. She’s gorgeous, smart, generous and kind. Which guy wouldn’t want a woman like that by his side? So when her grandmother gets arrested in South America, Joe sees a perfect opportunity to show Julia how good they’d be together. Julia needs someone to accompany her to Peru, someone who speaks Spanish and who doesn’t crumble in the face of authority. Julia needs Joe.
But when they get to Lima, they discover things are much worse than they were led to believe. With danger at every turn and lives on the line, Julia is forced to get past her issues and trust in Joe–her life depends on it.

Goodreads / Amazon / Barnes & Noble / iBooks / Kobo
—
Only 99¢ for a limited time!
—
EXCERPT:
This takes place as Joe and Julia spend the night waiting until her gran gets out of jail...

“Is it always like this?”
“Every op is different. Sometimes there’s waiting when you don’t want to wait. It’s the nature of things.”
“What did you do when you were waiting, when you were in the Marines?”
“Well, I didn’t play cards with a pretty girl, that’s for sure.”
Julia felt her cheeks burn as she looked back down at the cards. Her stomach was doing somersaults, and she regretted eating even the small amount of fries she’d managed to get down. Joe got up, headed for the bar fridge and came back with a tiny bottle of wine and a glass.
“Here, it will help with your stomach and your sleep.”
Julia looked at the glass, then at Joe. “Do you realise that most glasses found in hotel rooms haven’t been washed properly? I watched a documentary about it. Maid service were just rinsing them under the tap, then polishing them with a towel.”
He unscrewed the bottle and handed it to her. “Then don’t use the glass.”
Julia took the bottle, drank a hefty swallow of cheap red wine, then looked at Joe. “Okay, let’s play.”
She could do this. Right? If she didn’t think about being alone with Joe. In a hotel room.
“Now that’s what I like to hear.” His eyes sparkled with mischief, making her stomach do the flipping thing again. “Do you know how to play poker?”
“No.”
“Rummy?”
“No.”
“Jules, do you know how to play any card games?”
She licked her lips, feeling more than a little foolish. “Snap?”
Joe threw back his head and roared with laughter. Once he’d calmed down, he appeared delighted. Julia didn’t know why.
“Guess we’re playing snap, then.” His grin was wide. “Now when you lose a round, there’s a penalty.”
Her eyes narrowed. “What kind of penalty?” She wasn’t taking off any clothes. None.
“Julia Collins, you’re thinking about stripping again, aren’t you? You are just desperate to get naked with me. Unfortunately, I’ll have to wait for that pleasure. If you lose, the winner has the right to claim a boon.”
Her head snapped up. “Boon?”
“Yeah, a reward.” He waggled his eyebrows. “It could be in the form of a question the loser has to answer, or a dare they have to take, or a kiss they have to give the winner.”
His eyes lingered on her lips, making her flush as she remembered the brief, sweet kiss he’d given her weeks earlier. The kiss that had made her hide from him ever since.
His eyes darkened as he watched her. “You’re thinking about it, aren’t you?”
Julia felt her cheeks burn, but didn’t answer.
“You still playing?” he challenged.
“Is hiding in the closet an option?”
His lips twitched. “No.”
“Then let’s start.” This might just be a game of snap, but there was no way she was letting him win. Especially with this boon system in place. The dark places of her mind were already speculating about what sort of boon Joe would claim. She shut them down and sat up straight.
“You ready?”
“Play your card, Joe.”
He won the first round because his reflexes were like a cat.
“This game isn’t fair,” Julia pointed out. “It’s more about being physical than being smart. I don’t have the same level of fitness as you. Nor do I have your speed.”
“I think you just insulted me.” He grinned as Julia went over her words.
Her eyes went wide. “I don’t mean I would have a better chance if we were playing a game that needed intellect. I just mean you’re bigger. You have more muscle. You’re sneaky and fast.”
“Tell you what, we’ll put the cards closer to you so that your shorter arms can reach them faster. Does that help?”
“You’re mocking me.”
“Only a little. Now I want to claim my boon.”
She froze. “I’m not taking off any clothes.” Not that she had many on. She’d packed a suitcase full of shapeless cotton dresses because she thought they would be the most practical option. All she had on was a beige tent that went to her ankles and beige cotton underwear.
Oh. My. Goodness.
Joe could not see her underwear. Ever.
“You know, just once, I’d love to be inside your mind,” Joe said. “I bet it would be fascinating.”
“What’s the boon, Joe?” She squared her shoulders. She could take it.
“Unpin your hair. Let it fall free.”
“My hair.” She touched the tight bun at the back of her head.
“Yeah, I’ve never seen it down.”
Feeling entirely too self-conscious, Julia unpinned her hair. The honey-coloured waves fell to her shoulders. Her hair was hard to style. It was never neat enough for Julia, and there was too much of it. She’d inherited her mother’s thick locks.
“Beautiful.” Joe reached out and played with one of the waves. “You should wear it down all the time.”
“It gets in the way.”
“Of what?”
She frowned at him. “Life.”
With a grin, Joe played another card. “Come on, time for you to win a boon. If you can.”

Janet is a Scot who moved to New Zealand fifteen years ago. Among other things, she’s been an artist, a teacher, a security guard at a castle, a magazine editor, and a cleaner in a drop in center for drug addicts (NOT the best job!). She now writes full-time and is working on her 19th book. Her books have won several awards, including the Daphne du Maurier award for excellence in mystery and suspense. When she isn’t living in her head, she raises two kids, one husband, and several random animals. She survives on chocolate and caffeine.
Website / Facebook / Instagram / Pinterest / Newsletter