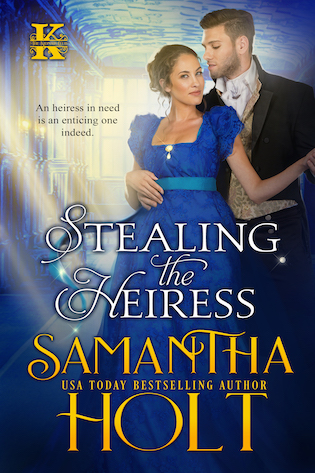 
She was looking for adventure…
Lady Rosamunde Stanley just never expected in the form of a kidnapping.


Well, an almost-kidnapping. The dastardly man only went and took the wrong woman!
But she soon discovers the dark, handsome man is not quite the terrible rogue she thinks him to be and she decides to put his experience to use. Her uncle has gone missing and no one believes her when she says he’s in trouble. Can she persuade Russell to help?
Russell might have kidnapped her, but he has no intention of keeping her. Even if the heat between them is driving him out of his wits and her crazy family makes him long for things a battle-hardened orphan like him should never want.
Their societal divide isn’t the only reason to keep his distance. Rosamunde is a bloody knife-carrying, picklock-wielding madwoman.
A far too appealing madwoman…
He’s not the only one struggling. Rosamunde is finding it just as difficult to fight the attraction, despite knowing it is most likely her over-active imagination leading her down this path. Somehow, she must keep her head around the most exciting man she’s ever met.

Goodreads / Amazon
—
EXCERPT:
“Stay where you are or I shall shoot,” he ordered firmly.
The driver nodded, his hands trembling around his loose grip on the reins. Russell moved around the carriage and glanced through the window to find two women clutched together. He eyed the younger one. Dark haired and attractive, just as Guy had described.
Very attractive. Russell clenched his jaw. Miss Heston looked a little older than the one-and-twenty-year-old he had expected but Guy had certainly downplayed her looks. She peered at him with wide eyes then murmured something to her older companion.
Before he pulled open the door, the woman shoved it and pushed her head out, meeting his gaze head on. Without the hazy glass between them, he had a full view of generous lips, a slightly stubborn chin, and wire framed spectacles that emphasized a warm, nutty gaze. However, there was nothing warm about the way she looked at him.
He let a brow rise. The woman was an excellent actress.
“Come with me.” He kept his voice low, just in case her companion did not know of their arrangement.
“Like hell!”
He blinked at the blasphemy. As far as he knew, the woman they were kidnapping was gently bred and trying to escape the persistent overtures of a gentleman. Still, perhaps she was trying to play the role of helpless victim for her companion’s benefit.
Very well. She wasn’t the only one who could act. He had not read every one of Shakespeare’s plays for no reason. “Come with me or I shall shoot,” he warned her, keeping his tones low and aggressive.
Miss Heston scanned the length of him and lifted her chin. “If it is money you want, I am quite wealthy.” She put her hand to a broach at the neckline of her crimson gown.
Russell’s gaze tracked the movement, unintentionally. He only realized her cleavage had caught his attention when she began to undo the gold and ruby broach. He swiftly looked away and blinked, feeling as though the image of soft skin, dark shadows, and generous curves might well be burned into his mind. Every time he blinked from now on, he suspected he would see the image there again.
Fool. He’d seen many a cleavage in his lifetime. A little glimpse of what appeared to be a most excellent cleavage wouldn’t be the undoing of him. If he could survive on the streets and forge a life for himself from nothing, he could most certainly rid himself of the image of the faintest glimpse of not even a third of a breast.
Or two.
Damn it. He blinked a few more times then scowled when she handed over the broach.
“Here, this is worth far more than you could get for me from ransom.”
He ignored it, letting his frown deepen. Why the devil was she dragging this out? Much longer and the driver might get the courage to fight him or someone would happen along, and Russell could end up getting shot.
“If that isn’t enough…” She hitched up her skirt, revealing a shapely, stocking-clad leg.
Well, the cleavage image no longer bothered him so that was something. He swallowed hard and frowned as she revealed the lacy edge of her stocking and the garter holding them up. Her hand moved slowly to the band and she tugged out a bank note.
Why the hell did this woman keep banknotes in her undergarments?
She reached for the note then curled her fingers around something else—a jeweled handle.
A damned penknife.
She grabbed it swiftly and thrust it outward. Russell dodged back, the blade skimming past his stomach and catching briefly on the fabric.
“Bloody hell, woman.” He grabbed her wrist. This play-acting was becoming far too dangerous. This needed to end now.

USA Today Bestselling author Samantha Holt lives in a small village in England with her twin girls and a dachshund called Duke. If you’re not sure where to start why not try…
Amelia and the Viscount (Bluestocking Brides #1) for a fun, slightly hot shorter length read. Meet the Chadwick sisters and follow their adventures in each of their standalone stories.
You’re the Rogue That I Want (Rogues of Redmere #1) is a longer read with heat, witty dialogue, a feisty heroine and adventure. All books in the series are standalone.
Sinful Confessions is the first in the Cynfell Brothers Series. These are all novella length and standalone–ideal for a quick dip into the world of the sexy Cynfell brothers.
Wake Me With a Kiss is a sweet, fairytale romance. Twists on Beauty and the Beast and Cinderella are also available if you love a clean, fun read.
To Steal a Highlander’s Heart is a full length dive into the world of sexy highlanders. For those who love braw Scots, some steamy scenes, and medieval romance, this series is a perfect escape.
Website / Goodreads / Facebook / Twitter / Instagram / Newsletter