BOOK BLITZ: His Baby, Her Billionaire by Sloan Storm #GIVEAWAY 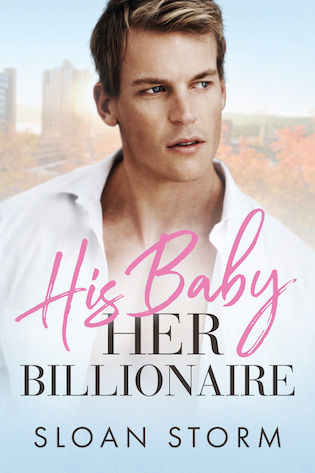 He has billions of secrets. Me? I only have one, my baby bump, and it’s starting to show.
Dalton “The Destroyer” Maxwell.
That’s what they call him.
He’s the sexy older man, the distinguished battle-hardened SEAL turned brooding, introspective professor. There isn’t a red-blooded female in five hundred miles that wouldn’t kill to trade places with me.
It was only a fling – just a chance encounter in a faraway place. I wasn’t looking for a fairy tale ending beneath those starry skies.
But what should’ve stayed a memory didn’t. It chased me home, leading me right where it shouldn’t – his arms.
Now the consequence has me feeling like I’m cramming for an exam that I’ll never pass. The truth is, everything about us is forbidden. Nothing good can come of it.
There’s only one problem. Dalton disagrees and won’t take “no” for answer.
When he promises he’ll give it all up for me and his baby, that’s when his ten-figure truth leaves me with an impossible choice.
What have I done?

Goodreads / Amazon
—
EXCERPT:
She turned her head but didn’t speak as her blonde hair fluttered in the gentle breeze of the oceanfront spray. I was close enough to catch her scent. A faint hint of lilac and sweet jasmine blended with the surf-churned air, capturing my focus and pulling me closer to the source.
I knew she heard me.
I also knew what she was probably thinking.
Couldn’t stay away huh?
Subtlety isn’t a strength of mine, on the battlefield or in the war of love.
In my hands, an arsenal of alcohol, one bottle I’d half-emptied, guzzling it down on the stroll. I hit the beer again, taking a quick pull and attempting to draw her out of her guarded silence.
“Guess that’s a no.”
It’s not like I gave a damn about the game. I doubted she did either. Then, she turned and my jaw clenched.
Easy.
Easy.
Only it fucking wouldn’t be.
The chick was an absolute knockout. She’d be right at the top of any man’s trophy shelf. And if my plan panned out, I’d be adding her to my collection long before the sun crested over the distant capri-blue swells.
Maybe it was those early years, being shipped off to military school like a dog chained up in the yard after it’d pissed the floor one too many times. Whatever the cause, the effect had a way of heightening my interest in the fairer sex long before it otherwise might have.
Point is, for as long as I could remember, only the most beautiful of women were worth the pursuit. After all, you only live once. Tales from the rocking chair are always better when you landed the big fish, not when it disappeared back to the murky depths.
Even so, I never breathed a word of my conquests over the years.
Outside the small circle of my SEAL brothers, my appetites were strictly confidential. Sometimes I wondered if my blue-blooded parents thought I might not even be straight but instead playing for the same team like my sister, Shelley.
But whatever, fuck them.
I thought for certain I’d bedded the best, had more than my fair share of beauties from one far flung part of the planet to the other.
That is, until now.
My breathing slowed. I blinked even slower and tightened my grip on the bottlenecks so hard, it felt like they might crackle into shards between my fingers.
Sunlight flared in the depths of her hazel green eyes. Lightly tanned skin and high cheekbones drew my gaze toward a set of supple, silk-smooth lips. She didn’t bother trying to contain the renegade, wind-whipped strands of her mane as they lashed about, tickling her sun-kissed complexion.
Instead of giving me the results of the game, she fixed a little smirk on her lips and came right back at me.
“Guess.”
That was all the opening I needed. I took a step her direction, the sea-dampened sand giving way under my feet.
“Better luck next time.” I lifted the bottle. “How ‘bout a consolation prize?”
She wrinkled her nose. “Thanks, but no. I’m not much of a beer drinker.”
The condensation on the neck dripped from my fingertips as I offered her the bottle once more.
“No strings.” I wiggled it. “Why waste this beautiful sunset sober?”
Just then, a wave hammered the shoreline behind her, surf thundering as it roared our direction. It was on us in no time, swirling around our legs and tugging at them like a deep sea vacuum. A shriek escaped from her lips. It didn’t sound like fear though, more like a melodic blend of whimsy and surprise.
She hadn’t meant to do it.
Or maybe she had.
I steadied myself, flexing my legs and core while she clung to me. But almost as soon as it came, the rushing current receded, leaving only her fear-filled fingers clutched tight around my biceps.
“Sorry.” She sputtered out a reedy breath and snatched her hands away, forming two white-knuckled fists.
The doe-eyed beauty stood there frozen stiff, in a defensive position with her hands partially blocking her tits. I imagined those same delicate fingers curled into the meat of my hips while I claimed her wet silk, taking her under the stars in a secluded seaside hidey hole. 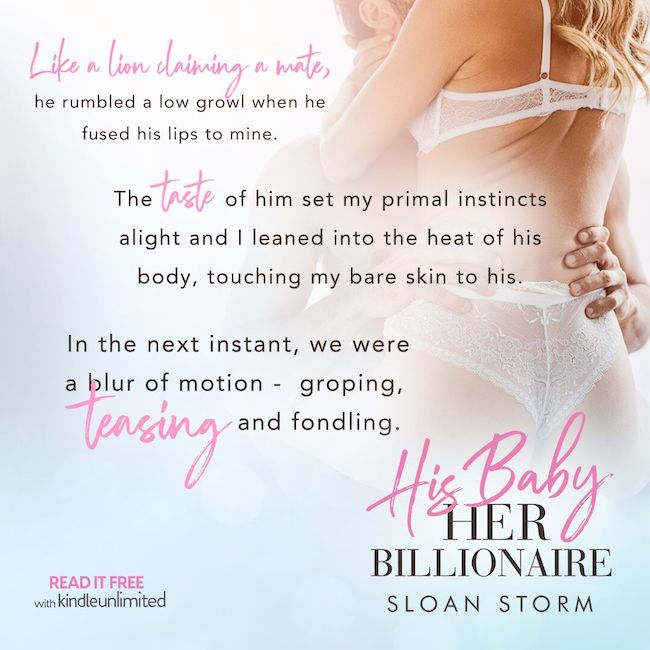 Sloan Storm pens imaginative yarns based on dominant men and the women who challenge them. As such, power plays and passion are the heart of each and every story.
The writer's creative tendencies may drift as the mood strikes, but the essence of all tales told wind up back at the same place... the polarizing difference between the sexes.
After all, what else is there in life?
When not glued to a keyboard creating tales of whimsy, Sloan loves to talk to fans! If you want to connect, you can do it in any number of ways:
Website / Facebook / Twitter / Instagram / Newsletter / Bookbub / Goodreads