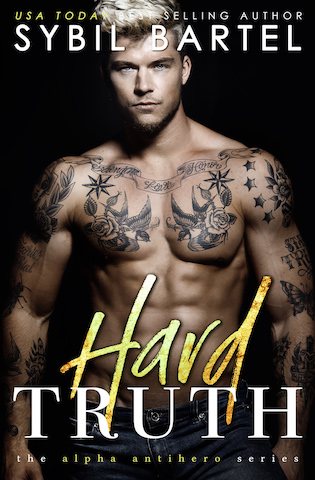 I couldn’t escape the hard sins of my past.
I couldn’t unsee the truths in my mistakes.
Every breath she took was a reminder of the pain I’d caused.
Growing up at the mercy of a madman, I swore I would never give anyone that kind of power over me again. But here I was, on my knees, begging for a life I lost.
Except no amount of forgiveness would bring it back.

Goodreads / Amazon / Barnes & Noble / iBooks / Kobo
—
EXCERPT:
I came to with a start.
Disoriented, nauseous, fight or flight kicked in, and I rolled.
“Why the hell did you knock him out?” Kendall bitched.
Shade smirked. “Would you rather I shot him?”
Luna rattled something off in Spanish.
On my hands and knees, my equilibrium shot, I took two more breaths and pushed to my feet, then stumbled into the wall. Fucking vagus strike.
Crossing his arms, Shade gloated. “Never been knocked out before?”
“Shut up,” Kendall snapped at him as she reached for me. “You need to sit your ass down.”
Dizzy as fuck, I pushed her away.
His hand on his piece, Luna got in my face. “Touch her again and I won’t be as nice as Shade.”
Ignoring all of them, I aimed for my bedroom.
Kendall followed. “If you’d listened to me and—”
I slammed the door in her face and stumbled to the bathroom. Breathing deep, I held on to the counter a few seconds, then stuck my head under the faucet. Running a towel over my hair, I grabbed my 9mm and walked back out.
Shade blocked the front door, and Luna stood in front of him.


Kendall put her hands on her hips and raised an eyebrow. “Let me guess, you’re going after her.”
Ignoring Kendall, I leveled Luna with a look. “Move.”
“You going after her?” Luna asked.


“What the fuck do you think?” Sybil Bartel grew up in Northern California with her head in a book and her feet in the sand. She dreamt of becoming a painter but the heady scent of libraries with their shelves full of books drew her into the world of storytelling. She loves the New Adult genre, but any story about a love so desperately wrong and impossibly beautiful makes her swoon.
Sybil now resides in Southern Florida and while she doesn’t get to read as much as she likes, she still buries her toes in the sand. If she isn’t writing or fighting to contain the banana plantation in her backyard, you can find her spending time with her handsomely tattooed husband, her brilliantly practical son and a mischievous miniature boxer…
But Seriously?
Here are ten things you probably really want to know about Sybil.
She grew up a faculty brat. She can swear like a sailor. She loves men in uniform. She hates being told what to do. She can do your taxes (but don’t ask). The Bird Market in Hong Kong freaks her out. Her favorite word is desperate…or dirty, or both—she can’t decide. She has a thing for muscle cars. But never reply on her for driving directions, ever. And she has a new book boyfriend every week—don’t tell her husband.
To find out more about Sybil Bartel, be sure to follow her on Twitter (she loves to hear about your favorite book boyfriend!), visit her website, like her on Facebook or join her Facebook group Book Boyfriend Heroes for exclusive excerpts and giveaways.
Website / Goodreads / Facebook / Twitter / Instagram / Newsletter