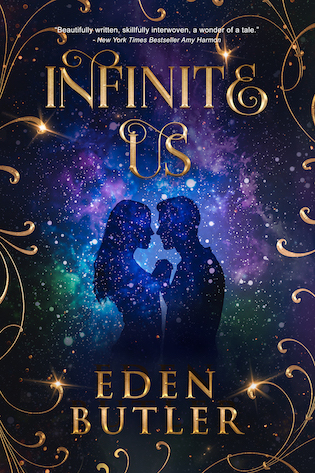 Love is timeless…
Nash Nation loves zeroes and ones, over-sized monitors and late office hours. He’s too busy taking over the world to make time for relationships—that is, until his new neighbor Willow O’Bryant barges into his life, and now Nash can’t shake the feeling that this isn’t the first time she’s interrupted his world.
Then, the dreams start. And in the dreams—memories.
Memories of a girl named Sookie who couldn’t count on love or friendship, never mind forever. Memories of a library and a boy called Isaac and secrets made in private that destroyed his world.
The memories seem real, but who do they belong to?
When Nash and Willow discover the truth, life as they know it unravels.
The bridge between this life and the next is shored up by blood and bone and memory. Sometimes, that bridge leads to the place we’ve always wanted to be.
—
NOTE: This is a completely revamped re-release version of this title with new characters and is a standalone with a HEA.

Goodreads / Amazon / Barnes & Noble / iBooks / Kobo
—
EXCERPT:
“This thing we got… I told you, it won’t be easy.”
“Nothing good is ever easy, Isaac.”
There was a pause as unasked questions hovered around us. I considered what life would be like with Isaac, that no matter how committed we might be to our relationship, we could not exist in a vacuum. Struggles would follow us wherever we went, and would spill out to our families, our loved ones, our friends.
He waited. Although Isaac was the one who moved with caution, the one who refused to assume that the easy road would be ours to travel, he waited for me to come to a decision. He wanted me to say yes, but wouldn’t ask the question. He would not lead me anywhere, but would be waiting for me when I arrived—if I didn’t turn back.
“Isaac?” He nodded again and brought me closer. His cheeks were wide, his features strong and he closed his eyes, as though he relished the feel of my fingertips over his face. “Will you love me? No matter what happens?”
Isaac pulled me around him, holding me against his large body, his hand around my waist. His voice was quiet, but filled with strength, with conviction. “Always.”
No one had touched me like Isaac. He had a way about him, something real and honest that was assured by his long, perfect fingers down my back and the slip of his tongue inside my mouth. There was no fear, not when those fingers gripped me tighter, when he slowly lowered my zipper and held my hand as I stepped out of my dress.
He watched me then, and even though a different Riley might have been shy, I liked the way his stare felt against my bare skin. It was me he wanted, only me; only I could sate his hunger, redeem that desperate look that had caught him in a silent pause.
Isaac still held my hand, arm extended with that hard, greedy gaze working over me. He made me feel needed, wanted, he made me feel necessary. And when he pulled my hand to rest it against his heart, I held my breath, waiting to hear what he thought, hoping he wanted me as much as I wanted him. “My sweet… my beautiful Riley.”
He stepped back, my fingers trailing away from his chest, and tugged off his shirt, dropping it to the floor, instantly forgotten. Isaac picked me up and carried me to the bed, divesting me of everything that kept me covered, and everything that kept him hidden from me.
I had never seen a naked man before. I’d never been naked with a man before. But there I lay on Isaac’s large bed covered by his long legs and muscular thighs, my small frame underneath him, open to him as he took control and showed me what it meant to be loved.
“You and me, Riley, there’s nothing but this. Nothing else but this, how we are right now.”
Isaac never spoke much of his feelings, the things that rocked his soul, the many worries that kept him up at night. Maybe he didn’t know how to say he loved me, but just then, with Isaac’s warm, solid body right against mine, skin to skin, touching me like no one ever had before, I decided words weren’t all that important.
“Nothing else, my love. Nothing else at all.” 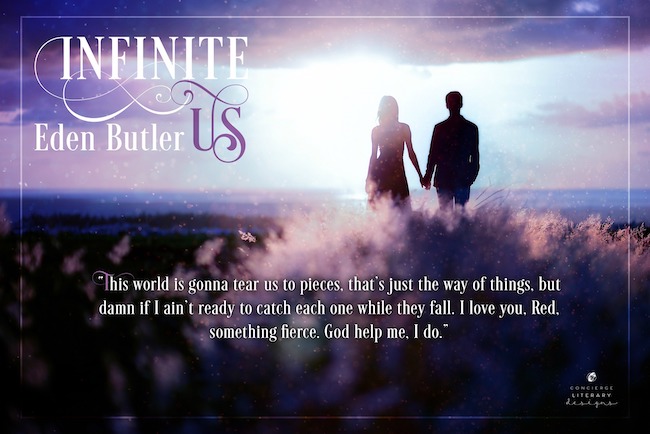 Eden Butler is a writer of contemporary, fantasy and romantic suspense novels and the nine-times great-granddaughter of an honest-to-God English pirate. This could explain her affinity for rule breaking and rum.
When she's not writing or wondering about her possibly Jack Sparrowesque ancestor, Eden patiently waits for her Hogwarts letter, reads, and spends too much time in her garden perfecting her green thumb while waiting for the next New Orleans Saints Superbowl win.
She is currently living under teenage rule alongside her husband in southeast Louisiana.
Please send help.