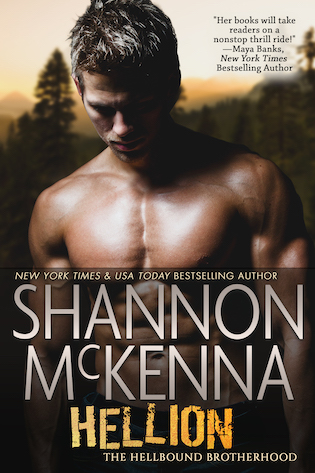 Find out why New York Times bestseller Maya Banks hails McKenna’s books as “A nonstop thrill ride…”
He’s a ticking bomb…
Eric Trask is counting the days before he blasts out of Shaw’s Crossing forever. He and his brothers were raised at GodsAcre, a mysterious doomsday cult deep in the mountains, and are the only survivors of the deadly fire that destroyed it. The townspeople see them as time bombs just waiting to blow, but Eric’s going to prove those bastards wrong. He’s an ex-Marine, fresh off a tour in Afghanistan, working three jobs and barely sleeping. Utterly unprepared for Demi Vaughan’s dazzling green eyes, lush pink lips and sexy curves. She’s the town princess…he’s a dangerous outcast. It was a sure recipe for disaster.
But the closer he gets to Demi, the more impossible it is to resist…
Forbidden fruit is the sweetest…
Demi Vaughan has big plans for life post- college, and Eric Trask, notorious bad boy with a complicated past, is not part of them. So when he saunters into the sandwich shop where she works she tells herself he’s just tall, ripped, smoldering eye candy, nothing more. Eric was damaged. Marked by violence and tragedy. He’d be the ultimate bad boyfriend, and right now she was too busy even to shop for a good one. But his hot eyes and hard body, his sensual smile and that rough, sexy voice of his shook her resolve. After all, she was leaving this place forever. A little taste of heaven…what could it hurt?
But Shaw’s Crossing has deeper, darker secrets than Eric or Demi could guess. The evil that destroyed GodsAcre is lying in wait…and it will stop at nothing to keep Eric and Demi apart…
AUTHOR’S NOTE: Hellion, Book One, ends on a cliffhanger, but it leads right into HEADLONG, Book Two, Demi and Eric’s continuing story, dated seven years later and available for preorder now! The other titles in The Hellbound Brotherhood are a connected series, but each book features its own couple and has its own HEA.

Goodreads / Amazon / Barnes & Noble / iBooks / Kobo / Bookbub
—
EXCERPT:
Eric had been trying so hard to walk the line. Head down, eyes forward, pocketing every spare penny to put toward his future. Then Demi Vaughan came into his line of vision, with her glossy brown curls and her hip-swaying walk, and whammo. His better judgment got coshed on the head, tied up and stuffed into the trunk of a car.
This was such a dumb move. On so many levels. He was the Prophet’s spawn, she was a rich girl, the town princess, the college grad. He was practically broke, she lived in the biggest house in Shaw’s Crossing. He was an orphan with a past best not talked about, and she was the granddaughter of the guy whose family gave the town its very name.
That was the girl he got a raging hard-on for. Because evidently he liked to punch up the challenge. Keep it interesting for himself. True to form.
He kept seeing the scene tomorrow, at the river, in his mind’s eye. Demi soaking wet. Clingy, scanty clothes. Her cloud of dark hair floating around her. Nipples tight from the cold.
He hit the accelerator. The sudden burst of speed knocked the wobbling window right off its track, and it fell down inside the car door with a loud, decisive thunk.
Aw, shit.
He could still hear his better judgment back there, trapped in the trunk. Howling, kicking out the taillights, trying to be heard. But he just couldn’t listen to it.
Stay down, you noisy dickwad. I got things to do. 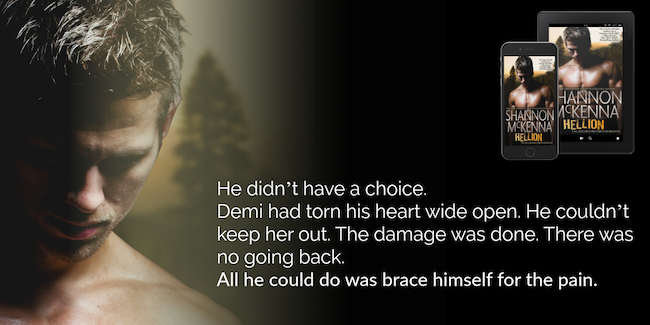 Shannon McKenna is the NYT and USA TODAY bestselling author of over twenty action packed, turbocharged romantic thrillers, among them the wildly popular McCloud Brothers & Friends Series, along with two new scorching romantic suspense series, The Hellbound Brotherhood and The Obsidian Files. She loves tough and heroic alpha males, heroines with the brains and guts to match them, terrifying villains who challenge them to their utmost, adventure, blazing sensuality, and most of all, the redemptive power of true love.
Since she was small she has loved abandoning herself to the magic of a good book, and her fond childhood fantasy was that writing would be just like that but with the added benefit of being able to take credit for the story at the end. The alchemy of writing turned out to be messier than she'd ever dreamed, but what the hell, she loves it anyway and hopes that readers enjoy the results of her experiments. She loves to hear from her readers.
Website / Goodreads / Facebook / Twitter / Instagram