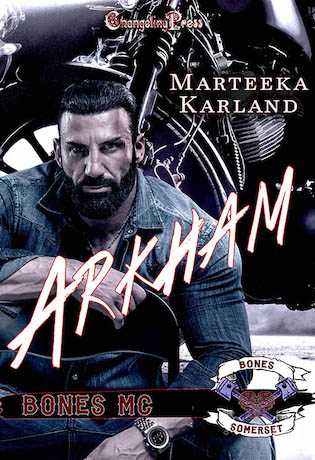 Rain — The gangs of the underground can be brutal. I know this well and have the scars to prove it. So when a team of rough-looking men start nosing around the slums of Rockwell, I make it my business to know what they’re up to. One in particular catches my eye. He’s rough and scary looking, but his touch is gentle when it needs to be. He’s older and more experienced in every way than me, but I’m still drawn to him. I’m not sure why, but I want him. And when I let him take me, I’ll savor the experience until it’s time to go.
Arkham — The little pixie warrior is a conundrum if ever there was one. She’s strong and capable but scared inside and out. I can’t fix what’s broken inside her, but I can share her burdens and make her part of my circle. I’ll take her with me, with Bones MC. She’ll be protected there.
But who’s gonna protect her from me?