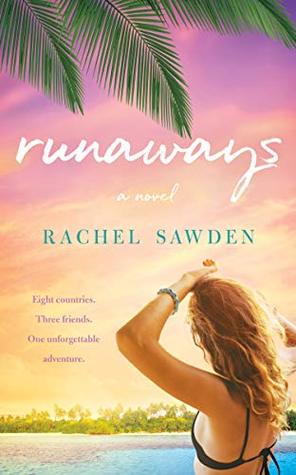 Harper Rodrigues’ five-year plan was on track. She’d worked hard to secure her graduate marketing job, her boyfriend Adam was set to propose any day, and she was learning to process the death of her sister. She’d been through some dark times, but there was light at the end of the tunnel.


At least, that’s how it had seemed until the day she was fired in the morning and dumped by nightfall.
Now, with her life plans in ruins, Harper turns to her best friends who are going on the trip of a lifetime – five-months traveling across Asia and Oceania. Determined to see the silver lining in her unraveled plans, she decides to book a plane ticket to join them and resurrect her dreams of becoming a travel photographer.


But Harper’s travels aren’t all sunshine and cocktails. With Adam begging for her forgiveness and proposing on the eve of her departure, Harper knows she must be on her best behavior. But when she meets Xavier, an enigmatic poet on the beaches of Goa, that may just be easier said than done.
Runaways is the empowering and racy tale of one woman’s voyage of self-discovery. A must-read for fans of travelogues and romance alike.

Goodreads / Amazon / Barnes & Noble / iBooks / Kobo
—
EXCERPT:
Date: January 8, 2010
Toronto, Canada
Where would you go if you could run away? Trek the tangled jungles of Thailand? Camp under the constellations in the Australian outback? Or run wild with your lover on white sand beaches in the South Pacific?
“Nowhere,” I whispered. My heels clicked on the linoleum floor, punctuating the spiel from my presentation echoing in my head. “I am exactly where I am supposed to be.”
How could I not be positive? I was one of the lucky few to gain and maintain employment in the shadow of the Great Recession. Fresh out of university, I might add. Granted, my working unpaid for TMI Marketing during my summer years gave me a leg up on the competition. While my job consisted mainly of making coffee, filing papers, and having my ideas ignored, I worked my ass off for the past three years. And today was the day my hard work would pay off. It was the day it all would change. The career side of my five-year plan was on schedule.
A fresh wave of adrenaline pulsed through me as I made my way down the hallway of very unflattering lighting to my boss’s office to discuss the presentation I’d given that morning. A discussion that would hopefully lead to a new position in the company. One where I could take on actual responsibility and express my creativity. Perhaps be involved in art direction. A business card with a title: Harper Rodrigues, Marketing Executive.
I would actually manage my very own accounts.
We had secured a new client, a travel website, Madcap Travels, who was looking to reevaluate their social media marketing plan and contracted my company to manage it. Myself and a colleague had made competing presentations for the job. Only one of us could gain the account. Only one of us could be promoted. Only one of us could win today, and I wanted it to be me.
I had never been so excited about a project, and so damn scared about presenting.
Inspired by my friends’ upcoming “gap year” travels, I created the Run Away campaign harnessing the power of this growing thing called social media. When Facebook became a buzzword a few years back, my father said it was just a passing fad used by horny college students too lazy to go to the bar and talk to each other. He may have been right, but once it had been opened up to anyone with an email address there were millions of lazy, horny people of all ages across the world skulking around on confined areas of cyberspace. And that is gold to a marketer.
In a nutshell, the campaign would focus on incentivizing both amateur and professional photographers who were traveling the globe to connect and share their stories and photographs on social media platforms. Top entrants would not only gain recognition on the website but also chances to win prizes from partner sponsors such as airlines, tour companies, and hotels. I poured myself into this presentation. Putting myself in the shoes of one of the many runaways, I imagined my life living out of a backpack, seeing a new city every week, learning from other photographers, finding remote waterfalls and villages from the whispers of other vagabonds.
It was what I hoped to do had I not abandoned my plans to become a world-famous travel photographer.
It was what I could do if I abandoned my carefully crafted five-year plan and took off with Jade and Lana.
It was what I wanted to do with my sister, Audrey, since we were little girls. It was what we could have done if she were still alive. 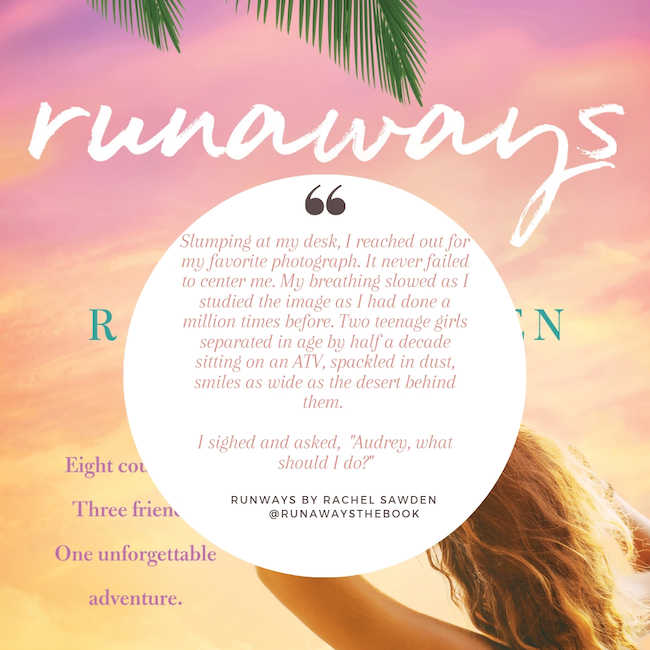 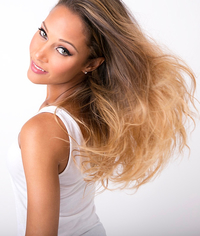 Rachel Sawden was born and raised in Bermuda. As the daughter of a Jamaican father and English mother, the former model earned a bachelor’s degree in Psychology from McGill University in Montreal Canada. Today, Rachel is an author, producer, and content creator in her beautiful island of Bermuda. The certified scuba and free diver has explored the Great Barrier Reef and underwater worlds in Cuba and Indonesia. She is the ultimate travel maven, having journeyed to over thirty-five countries across five continents since graduating college.
Website / Goodreads / Instagram / Twitter