BOOK BLITZ: Building Up to Love by J.V. Speyer #GIVEAWAY 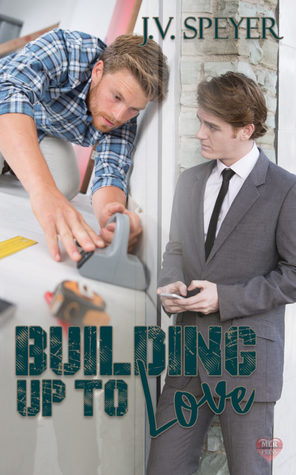 Jared is at the top of his game, professionally. His love life leaves a little to be desired. All he wants is someone who can love him for him, and who doesn’t demand he “pick a side.” The sudden reappearance of his college boyfriend, Logan, doesn’t make anything better.
Logan knows he broke Jared’s heart all those years ago. He plans to keep a respectful distance, especially once he starts defending a mob case. The last thing he wants is to bring more trouble into Jared’s life. As they keep getting thrown together, he finds it harder to stay away.
The Mob isn’t known for being considerate of their targets’ love lives. It’s not going to be easy to build a new relationship with Jared as Logan’s client’s enemies come knocking at his door…

Goodreads / Amazon
—
EXCERPT:
“You’re a genius.” Gage clapped his hands. His posture loosened, shoulders down and relaxed. “So what’s with you hitting the bottle on a weeknight? I thought you left your partying days behind you in grad school.”
Jared rolled his eyes. “I was such a party animal, too. Because construction sites are great places to be hung over.” He’d worked full time throughout his college years, and Gage knew it too. Sure, he had a full scholarship, but it hadn’t covered books or living expenses, and Jared had felt obligated to help support their mom and younger siblings at home.
He scoffed and took another gulp of his drink. “So your favorite client came by the building to pick out his finishes yesterday.”
Gage paled. “Aw, Geez. Wait— you’re working on that project?”
“Yeah. Well, the other interior guy’s in jail, so I picked it up.”
Gage grimaced. “I guess I couldn’t have kept you apart forever. But it shouldn’t have been a problem. You can be around each other long enough to let him pick out finishes.”
Jared squirmed in his seat. He didn’t want to confess his weakness to anyone, but he had to say something to someone. Gage was the best choice. And he should know. “He came back while I was laying out bathroom tiles.”
Gage closed his eyes. “Tell me that’s not a euphemism.”
Jared blushed. “It wasn’t a euphemism at first. But, um. We were arguing, and then—”
“Oh God, I watched this porno in middle school.”
“It’s not a porn— wait, what?”
“Angry office sex. It’s a classic porn trope. Come on, Jared, have you been living under a rock? The couple — who may not be a couple yet, but you know how it is — they argue, and then the next thing you know they’re getting busy right then and there over a desk or something—” Gage’s eyes bulged open and he grabbed for Jared’s drink. “Oh my God. My baby brother. Cannot unsee.”
Jared took his drink back. “Dude. No. It wasn’t quite like that. I mean there’s no furniture in there.”
Gage whimpered and covered his eyes.
“It’s just— I’m not sure where my brain went. I was just not thinking clearly, and that was all she wrote. I shouldn’t have done it. I should’ve punched him in the face and called the cops for trespassing.”
Gage calmed himself down. “But you didn’t,” he said with a sigh. “I think you need to ask yourself why.”
“I don’t know why. Impulsivity. Stupid bi people doing stupid bi people things—”
“Hey.” Gage’s voice cut through the din of the bar like a whip. “None of that. You never believed any of it before, don’t you start now.” He put his hand on Jared’s drink. “Maybe you’ve had enough of that.”
“Maybe if I drink enough of it, I’ll stop hearing him say it.” Jared took his drink back and drained it, but he could still hear Logan.

J. V. Speyer has lived in upstate New York and rural Catalonia before settling in the greater Boston area. She has worked in archaeology, security, accountancy, finance, and non-profit management. She currently lives just south of Boston in a house old enough to remember when her town was a tavern community with a farming problem. (No, really. John Adams complained about it. A lot.)
When not writing, J. V. enjoys watching baseball and seeking out all of New England’s creepiest spots. Her Spawn has turned her into a hockey enthusiast. She can be bribed with gin, tequila, and cats.
Website / Goodreads / Facebook / Twitter / Newsletter / Bookbub / QueeRomance Ink