LOOK at ME! The Works of Michael Meyer

PROMO OF MICHAEL MEYER
and his books 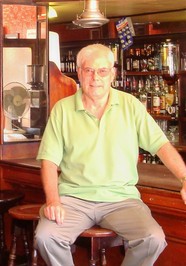 My CONTEMPORARY/HUMOROUS FICTION COLLECTION currently has two books: THE FAMOUS UNION, Book One; and THE SURVIVAL OF MARVIN BAINES, Book Two.

THE THREE KITTIES THAT SAVED MY LIFE was my heartfelt attempt to make things right again in my own life, and putting this true story of love down on paper worked. It was something that I just knew I had to do. One reviewer says of this book, "This is like drinking tea and honey on a cold day."

TRIANGLE OF HOPE was written as a testament to the fact that sheer determination on the part of people can bring about hope in even the most hopeless of circumstances.

THE SIR RODNEY VIGNETTES is a collection of humorous anecdotal episodes in the life of an Old World Charmer, allowing the English professor side of me to come forth.

I have resided in and have visited many places in the world, all of which have contributed in some way to my own published writing. I have literally traveled throughout the world, on numerous occasions. I have lived in Finland, Germany, Thailand, Saudi Arabia (where COVERT DREAMS - INTERNATIONAL SUSPENSE COLLECTION BOOK ONE - is set), and the U.S. Virgin Islands (where DEADLY EYES - INTERNATIONAL SUSPENSE COLLECTION BOOK TWO - is set). I gained the wanderlust to see the world, to experience other cultures, at an early age, and this desire has never left me. If anything, it has only gained in intensity as I have aged. I try to travel internationally at least once a year. In the interim, I spend lots of time traveling around both my home state of California and other nearby states.

Among the many unique things that have happened to me in my world travels, I have walked the streets of Istanbul with a detective, searching for a pickpocket who got me good. I have ridden on the back of a motorcycle in Tehran while the driver, who spoke not one word of English, pointed out all the sights to me. I have wrestled an Iranian soldier who tried to break into my hotel room in Tehran. I have had the paint completely stripped from my car as I drove across Saudi Arabia in a sandstorm. I have stood on the stage of a busy nightclub in Tokyo, singing "She'll be Coming Round the Mountain When She Comes" to an audience feeling no pain from the Sake they were drinking. I have been chased by a family of mongooses (yes, that is the correct spelling) on the idyllic Caribbean island of St. Croix. And that is just the beginning of my long list of worldly adventures.

As a recent retiree from a forty-year career as a professor of writing, I now live in Southern California wine country with my wife, Kitty, and our two adorable rescue cats.

All my books are available as both ebooks and paperbacks at Amazon, and as ebooks at Kobo, Apple, and Barnes and Noble.

His impending death hung in the air like thick smog, smothering everything in its path, obscuring a parade of ups and downs, the unevenness of thrills and chills that defined his life’s existence. It was eerie and scary, but also rather comforting, much like being in a warm bed on a cold night, like shivering while being filled with excitement at what was going to happen next. The news could very easily have been broadcast to those of his past and present, but he had made certain that all the speakers had been turned to mute. He had made the firm decision to meet his destiny without any chance of intervention by anyone. He was all alone in this, his final act.

The hotel room was a bit dark with all the lights switched off, but outside the window the sky was as bright blue as Cinnamon’s eyes had been. At least that’s the way it looked to Clint Westerly. For some reason his mind had suddenly flashed on Cinnamon of all things. Cinnamon had been the perfect cat. Paul Newman eyes, he had called them, which sparkled in the sunlight and glistened in the dark. Such beautiful eyes. Such a wonderful cat. Such a pity that eighteen years was all the time he had had to frolic through the world. Cinnamon had been the perfect cat, the perfect companion. The little cat had been much more than a friend. He had actually been like a son to both him and Sheila. Anybody who knew them would surely concur. That’s just the way things were in their wonderful world.

Their world. What a crock! What world? Everything gone now, vanished, disintegrated into thin air, the tiniest particles vaporized into non-existence. Not a remnant remaining except for the tortured thoughts brought about by that one memory that refused to disappear no matter how painfully the ever increasing toll that it took on his physical body and on his ever working brain, overwhelming him in the process, the remembrance bringing him to his knees, shutting out all other thoughts as well as the rest of the world.

The Munich all around her was bustling with activity. She could hear it from all directions. Munich was a wonderful city, a fun-loving place, the live and let live ebullience of the city emanating from its every nook and cranny. She had had a lovely stay here. All of it had been so adventurous, so new, so unlike life back home in Arizona. She could vividly recall the first time she had ventured into a Munich beer garden, where the liter mugs had been so huge that she had had to lift hers with both hands, and the giggles, from him, until he too had had to use both hands.

The fumbling noises he had been making came to an abrupt halt. He began stroking her cheek again. Gus looked so happy, so young, so full of life. It was so hard to imagine that he could be so heavily involved in all this horror.

Gus smiled at her once more. His eyes were soft, so gentle, so caring, so loving.

Maybe this was some kind of huge mistake. Maybe he wasn't going to kill her after all. Maybe everything would turn out happily ever after. Maybe. Maybe. Maybe.

But then suddenly she saw it clearly. It was no fairy tale. There would be no maybe. This was real, as real as the mixture of sadness and fear that now flooded her brain.

And then she died, with her eyes wide open, challenging, piercing his to the end.

These were not naked eyes, for the distance between these eyes and the beach bar at Cathy's Fancy was too great for the naked eye to discern who was who. No, these eyes had planned meticulously. The eyes were glued to a pair of terribly expensive and unbelievably powerful Swarovski Optik binoculars. The balcony on which they now worked, taking in the scene before them, was the perfect place to see but not be seen. The powerful binoculars saw to that.

The distance, the palm trees, and the rays of the sun all helped. The position had been hand picked, after careful consideration. Every angle had been considered, and, one by one, they had all been discarded for one reason or another until this very spot, the perfect place to observe while not being observed, had been selected.

Yes, the eyes had seen it all. The eyes had seen precisely what they had hoped to see. They were like a master puppeteer. They planned, controlled, and observed, but from a safe distance. They did not miss a trick.

The eyes. The deadly eyes of St. Croix.


My journey has been a long one, a difficult one at times, but it has a happy ending. The three kitties in my life have made it so. They have all helped me to become the happy-to-be-alive man that I am today. I now accept rather than cope. I live each day to the fullest, knowing full well that life is a gift, and a very precious one at that. I look back on my life and I often think that I must be the luckiest man in the world. I have so much to be thankful for. The wonderment and beauty of life are both so dear to me.

And, to add a delicious icing to the lovely taste of my life, I can say with total honesty to the whole world, my voice booming into the sky, my dancing feet not caring in the least who might see me, that I have been very fortunate to have done something that brings more sheer delight and wonderful pride to me than anything else that I have accomplished in my life: I have fallen madly, head-over-heels in love not once, but twice, and how many others can say that?