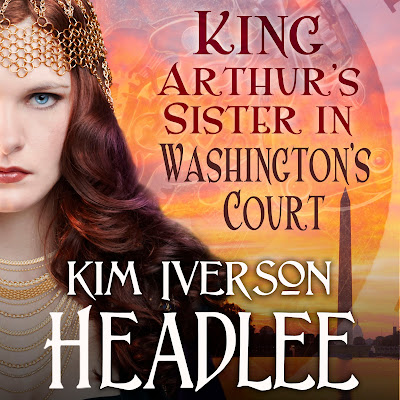 I am Morgan, Queen of Gore since the dawn of the 6th century. Title me “the Wise” if you wish to, as is so quaintly worded in your century, suck up. Title me “le Fay” to my face, and we shall see what your chroniclers write about you.
Furious over being denied vengeance upon my hated brother King Arthur and even more furious that the uncouth Hank Morgan destroyed my world, I cast the mightiest enchantment of my entire magical career: I assayed to travel forward in time to the year 1879, to the village of Hartford in the district of Connecticut in the realm of America, for to prevent the Yankee from traveling back in time. My spell misfired by 300 miles and 200 years, landing me in Washington, DC of 2079. And I had no idea under heaven how to correct the error.
I am, however, a creative woman. I forged a new kingdom as owner of the London Knights world-class baseball franchise. I cultivated new allies, made new enemies... and I fell for a man who could have been my dead lover's twin. Even so, I would pay any price to return to my rightful era.
It is a dream I have.

SATURDAY NOON, THE day of Game Four, I shared luncheon with Ambrose, sans paramour. She had been such a fixture up till now that her absence piqued my curiosity.
“How fares your fair Lily?”
I had not thought such an innocuous query would have touched a nerve, but his brow darkened like a thunderhead. “Resting,” he grumbled. “For the remainder of the day…and night.”
Of a sudden I understood. Mistress Lily had grown so weary of Ambrose’s baseball sessions with me that the benefits of his company could no longer compensate. I smiled, for this was welcome news, and said:
“Then I pray she enjoys a pleasant rest. As for you and me, I propose that we make our game doubly interesting by doubling the stakes.”
He laughed heartily and long. When at last he could catch a breath, he said, “You do realize you owe me millions, don’t you?”
“My collateral is my team. If you win, the Knights are yours.”
“Or you win double what I’ve won from you.” He stroked his clean-shaven chin and gave me a hard stare with those cold gray eyes of his. “Something tells me I should cash in my chips and walk away now, while I can.”
“And yet the gamesman in you will not, for who can walk away from the chance to own a world-class ball club?”
By the cant of his eyebrows, I knew I had scored a hit even before he grinned and said, “It’s on!”

Please tells us a little bit about the main characters of your book:
ALL CALL ME Queen. For my unparalleled skills in leechcraft, most call me “The Wise.” No man dares call me “le Fay,” lest he die. I hight Morgan. That is to say, my name is Morgan, so chosen by my mother, Duchess Igraine, to honor the Great Queen of the Old Religion, Mór Rigan, goddess of war. My mother never knew how prophetic her choice would prove to be. I am the daughter of Duke Gorlois, the sister of Queen Margawse and Queen Elaine, the wife of King Uriens of Gore, and the mother of Sir Uwaine of the Table Round. Blessed good fortune made me all of these things. By the capricious hand of ill fortune, King Arthur became my younger half brother, spawned upon my most virtuous and blameless mother by that demon in man’s raiment, Uther Pendragon. I am the only personage, kind reader, with whose biographical information you should concern yourself. What? You wish to learn more about some of the other minions—that is to say, individuals with whom I crossed paths during my sojourn in your century? Fine. Being The Wise does not always make me The Magnanimous, but you caught me in an agreeable mood today, and so I shall make an exception for you. The first person (of any consequence) I met after my time-travel spell went awry by 300 miles and 200 years was Clarice Centralia, a bright and talented young woman whom it pleased me to later name as my assistant in all matters political and magical. Clarice introduced me to the woman who would become my greatest ally in this era to which I did not belong, American President Malory Beckham Hinton, and President Malory’s husband, ex-Senator Ambrose Josiah Hinton. The less that is said about Ambrose, the better; I shall leave you to discover how he and I danced. Clarice also introduced me to the magnificent man who would become the love of my life—two lives, if you account for my shift in time—Alexander “Sandy” Leroy Carter. Sandy could have been the twin of my sixth-century lover, Sir Accolon, but he proved to be ever so much more, in ever so many ways. A renowned expert in all matters baseball, and a world-class player himself once upon a time, Sandy hired on as general manager of my team, the London Knights. In the course of helping me forge a team worthy to take on the formidable American juggernaut, the Connecticut Yankees, he not only taught me about baseball, but he taught me to look into my own heart. Our association was not all wine and roses, and I leave those details for you to discover too, but I must state unequivocally that Sandy Carter was, is, and ever shall be my Once and Future Love.

Kim Headlee lives on a farm in southwestern Virginia with her family, cats, goats, Great Pyrenees goat guards, and assorted wildlife. People and creatures come and go, but the cave and the 250-year-old house ruins—the latter having been occupied as recently as the mid-twentieth century—seem to be sticking around for a while yet. She has been an award-winning novelist since 1999 (Dawnflight first edition, Sonnet Books, Simon & Schuster) and has been studying the Arthurian Legends for nigh on half a century.
Amazon ✯ FaceBook ✯ Twitter ✯ Goodreads ✯ Website ✯ Pinterest ✯ About Me ✯ Newsletter ✯ Blog ✯ Authorgraph ✯ Google+ ✯ Linkedin ✯ Triberr ✯ YouTube ✯ BookBub