THE LOST
Book 5 of the Sage Seed Chronicles 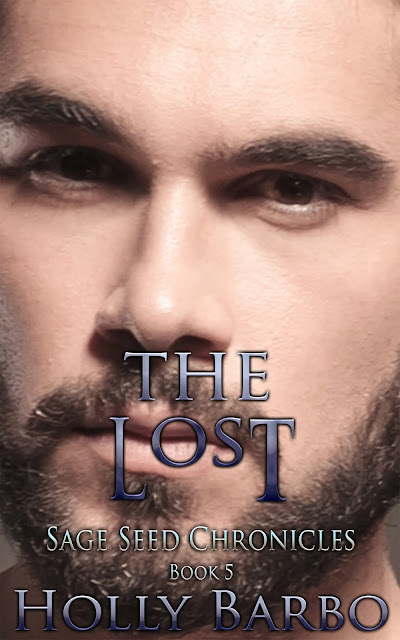 Long-lost artifacts lure people from a lost population out on a secret quest. At the same time, an unexpectedly strong winter storm forces Erin to take refuge in an isolated cabin. Unbeknownst to her, this was the last known location of the missing items that Kai, one of the lost, is looking for.

Dismayed to find Erin at the cabin, he reacts in the only logical way: Kill any witnesses to protect his people.

With a ferocious blizzard ravaging the realm, will the sages be able to prevent bloodshed? And what would it take to avoid war with THE LOST ones?

Bure glared at the old man, his whole body vibrating with his effort to suppress his frustration and be civil. He wanted answers and would prefer not to beat them out of the coot. The guy was older than him but looked tough. “How do you get out of this place? I’ve been all over this valley and I’ve not found even a crevice of a cave or a finger hold to scale the walls. You’ve been here awhile. Tell me!”

The grey-haired fellow met Bure’s eyes with a calm confidence. “I’ve watched you. I know. We all search this valley when we first arrive until we come to the same conclusion. So son, tell me, what part of ‘Once you’re in Obsidian Island there is no getting out’ don’t you understand?”

He chuckled when he saw the flare of rage in Bure’s eyes. “It’s true. There’s no exit. Look all you want. Let me tell you what you found: The walls of this crater are glass smooth and very hard so you can’t chip any climbing grips. The trees aren’t tall enough to reach the top if you climbed them. The stream that feeds this valley starts as an artesian spring in the small lake over there and exits in a seep at the west end of the basin. If it didn’t, this whole crater would be a lake with an island in the middle.”

Bure’s growl interrupted the recitation. “Yeah, well, what about that stone uplift?” He gestured to the huge column of stone rising from the floor of the basin.

The veteran mused, “It’s interesting, isn’t it? A former resident of this place had been a geologist. He said that before Obsidian became extinct it was trying to rebuild itself. That huge stone column is just as smooth and unscalable as all the other walls. It’s high enough that birds perched on the edge are beyond bow range, and even if you could get up there, you still would be out of reach of the outer walls.”

The older man shook his head. “It isn’t so bad a place when you accept the inevitable. You’ll see. There are resources to build a life here. We’ve all tried to escape and take revenge against those who sent us here but there’s no way out.” He studied the fuming young man. “So, what did you do? What laws did you break? My guess would be murder.” He watched as the new man clenched his fists.

Now the seasoned inhabitant threw back his head and laughed deeply. “Thought as much. I know the signs. I’ve been in this extinct volcano for nearly thirty years; killed a witch, I did. Murder is against the law on this world and one of the sure ways to end up here.” The old man’s gravelly voice took on a harder edge. “This crater is the exception, so don’t get ideas, son. I may be older than you but I’m fit and can defend myself. I can still kill you if you push me to it.”

Bure’s scoff of disdain was cut short by an unnervingly strong hand around his throat. The older man laughed with a mad glee, “You’ve heard the phrase, ‘I brought you into this world and I can take you out’? It’s very true, son. I’m Kald ... your daddy. So nice of you to provide this little family reunion. Welcome to Obsidian Island.”