LOOK at ME! Moonbeams of Unintended Consequences by Muffy Wilson 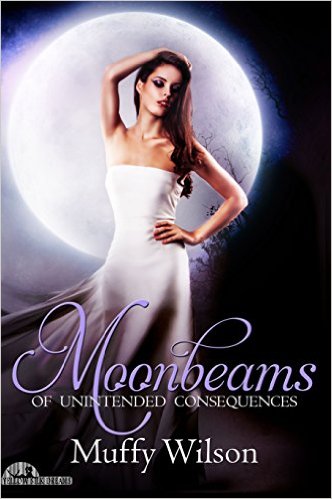 SHE wore a flowing, form fitted white spaghetti strapped gown that cascaded in tumbled silken folds to her abdomen and revealed her breath in the soft rise of her alabaster breasts. Her eyes reflected an emerald depth with gold flecks that edged to hazel and were framed by neat, arched brows that narrowed to her temples where her heartbeat announced the rhythm of her life. Her only adornment was a starkly white gardenia nestled in the curves of her auburn curls. The heavy floral fragrance of the corsage announced her arrival as she glided elegantly to her aisle and settled, like a dove, into her center seat. She was alone...but not for long.

Would she regret her indulgence?

HE was a towering, self-assured giant of a black man, chest broad and arms outstretched in opulent black leather. His dark mahogany eyes locked irresistibly onto her and declared his desire. The opera house erupted with his full bass-baritone harmony. His musical seduction began, and his hypnotic gaze was met by her eager response as she answered his desire with a blush.

His hypnotic gaze met her heated blush with hunger.

THEY spent an insatiable night together in Room 457 of the Historic Whitcomb Hotel locked in a magnetic embrace riding moonbeams of passion and ribbons of desire. He took her to the edge, to a special volcanic place inside, somewhere she had never before been and never been since: fiery, impatient, burning, yearning. That magnetic connection fueled a love that wove them irretrievably together in ways that only the future would disclose--a future neither of them ever anticipated.

Would the only man she could turn to help, as the secrets of the past reveal her betrayal?

Feigning a confidence she did not have, Jordan rose to walk the short distance to his office entrance behind Mason’s executive assistant. The closer she came to the double door that separated the two, the more keenly aware she became of her surroundings. It was grand, opulent, elegantly decorated and appointed. The view of the Michigan River below and Chicago skyline was the perfect backdrop for the kind of philanthropic work Jordan understood Mason did for the arts, artists and musicians as well as the supporters and the community. She felt a surprising swell, a warmth of pride build for him as she moved closer to where she knew he was. It had been ten years since she had seen him…and she was afraid. Would he be unwilling to help. Would he deny their history and turn her away? Would he still be her giant and she his Fire of Truth…?

The door swung open before his assistant had a chance to open it for her. He stood back from the door just feet from her, still a giant of a man. When had she released her heart to him? Was it the moment he opened his arms clad in black leather on stage so many years ago? How had he captivated her so thoroughly? Perhaps the subtle pulse of his heartbeat in the small of his neck made her his prisoner. Did it matter? 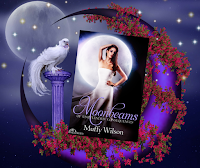 Tight knots of anticipation unraveled slowly as the warm welcome of both his hands grasp her outstretched right hand.

“Jordan, you are still a vision of loveliness and beauty. Come in. Thank you, Ms Meriwether. Please bring us some coffee. Or would you prefer tea, Jordan?” His smile broke her heart and gave it life at the same time.

“Coffee will be fine. Thank you,” she nodded with a grateful smile to Ms. Meriwether as the assistant backed out of Mason’s office. How would she begin? How could she begin?

“Jordan, you look more beautiful than I even remember. Your work agrees with you - and the moist San Francisco climate.”

“Thank you, Mason,” she stuttered softly as she cast her eyes self-consciously to the antique rug beneath her feet. “Mason…I…ah, I…”

“We have plenty of time for the here and now. Let’s reminisce over coffee and relax. Everyone is always pulling me in a hundred directions. I rarely have a chance to just visit and enjoy the company. Besides, it has been so long. Indulge me?”

“Of course, yes...yes, of course.” Jordan smiled shyly, raised her eyes slowly from the floor and surrendered them helplessly into his gaze.

The melodic, deep throaty resonance of his voice was irresistibly the same. It surrounded her, swallowed her; it made her weak from within. His voice brought that thought back to her once again; that and spending forever in the flames of the fire of truth - their truth. Oh, God, Jordan thought to herself as she released herself into her silent passions. She once believed a life without him would be torture, and yet, to have his kiss would surely be the death of her.

Muffy, author of provocative romance about love, sex, hope and passion, was born in Texas to traditional parents. With two older brothers, she was the youngest, the family "princess," indulged and pampered. Her father was a career Colonel and pilot in the U.S. Air Force which required the family to travel extensively. Muffy spent her formative years in Europe and 'came of age' in France which forged her joie de vivre and love for books, writing and education.

Married and living in the tropical paradise of SW Florida along the Gulf Coast, Muffy dabbles in real estate, writes and enjoys life in the sun with her husband and wee Havanese pup, Burt. 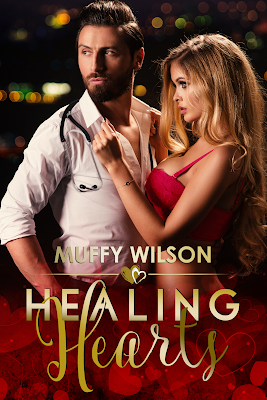 Paramedical meets paranormal in this steamy set filled with doctors, nurses, paramedics, shifters, werewolves, vampires, and more!
Get a dose of romance, STAT!
Featuring NYT, USA Today, and Amazon bestselling authors, we're Coming In Hot with paranormal to contemporary, and sizzling to seductive bedside manners by the doctors, nurses, paramedics, and more in this boxed set.

Now Available for pre-order at #99cents for a limited time!

Don't forget to add to your *want to read* list on Goodreads:

Walking on the edge with the underbelly of society in the shadows of the night could be hazardous to your health…or worse—deadly. 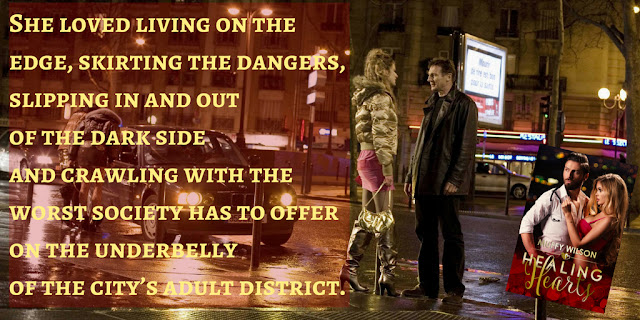 Brianna Denton walked the night and crawled the pubs searching for her sister’s murderer. Drugs and alcohol drove her twin to prostitution in the shadows and rat holes of the underbelly of North Beach society. Brianna lived her sister’s life on the tight edge of the raw reality until she pushed someone too hard, too fast.

Tatianna’s life drew Brianna into the bowels of the dark underground society, but to who’s destiny—her own or Tatianna’s?

Someone wanted her dead too.

He’d seen her on the streets, in the flea bag bars and pool halls the midnight scum frequented. She fascinated him with her Mediterranean beauty and her disdain. She was fast, unapologetic, but her curves were slow and yielding. He ached for her until one night slithered into the wee hours of the early morning at Blu’s Balls. The smoke in the pool hall hung in the air like a noose from the ceiling.
She wanted a bath but she wanted the blond-haired, blue-eyed man with the heart-shaped face and the gentle mouth more, first.

Dr Ben James recognized Brianna immediately when the EMT’s brought her into his ER. He hadn’t seen her since that night—the night she picked him.

Can he save her life? If he can’t, can he forget her?

Everyone gets what they deserve. Everybody knows that.

It was the wee hours of the morning and Brianna was all alone on the barren, black, wet streets. Curiously, she was unafraid to walk the night between the underbelly of society that lives in the darkness.

It was probably just like the night her sister was murdered. She was probably troubled by the same things—haunted by the depths of her own depravity. The clack-clack-clack of her heels on the sidewalk announced her approach as she headed…where? Home? That was a laugh. It made her think of the first time—her first time, maybe her sister’s first time—on the streets and in the black flesh pits of San Francisco that served up watered down whiskey, easy women and the finest drug connections money could buy, steal or cheat. Shrouded in the black lies hidden by the night, she did whatever she wanted, whenever she wanted and with whomever she wanted. The rain always had that effect, kept the good ones home while the creeps washed out of every skank black hole. 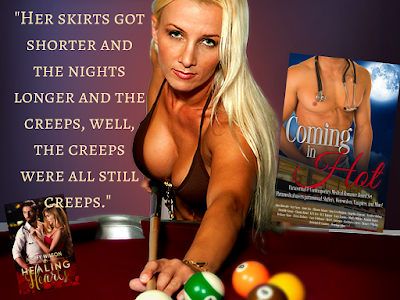 It was like that her first night…and he was a creep. But she did him anyway, holding her breath as he huffed, thrust, and panted into her young pink mouth. She thought of her kid sister. Was he the one?

The police didn’t know and had no more leads. What was she to do? She had to find out; she had to help. At least, she had to try.

But, she got swept away in the trying.

If she had any doubt about what she had become, it vanished with that blow-job stuffed into her sweet Mona Lisa smile. Every night since, her skirts got shorter and the nights longer and the creeps, well, the creeps were all still creeps.

The line between purpose and obsession became obscure.

She could question how she wound up on the streets, but she already knew. It was a matter of choice—her choice—and the men, the trail of men in her life, were a matter of choice too—her choice and hers alone. She picked them; they didn’t pick her. Still…It was just a matter of time before she would call one of those black rat holes home to curl up with the viper that lived within.

There was a wild thought afloat that nothing positive ever happens until you hit the very bottom of the abyss. Nothing positive had even begun to happen in her life. Guess she had further to fall, since she clearly had not hit rock bottom. Could be. Until then, she entertained herself with the fine parade of men. The steady stream of eager lovers had only one thing wrong—there was no love involved. No names, no “what do you do for a living”, no talk about wives, lovers, divorces or kids. Those were her rules and if you wanted to fuck her, you did it on her terms. Clear, simple, no muss no fuss…and no kissing. She didn’t want to kiss the underbelly of society. They were all scumbags and she liked it that way—on the edge, the tight, unforgiving edge. 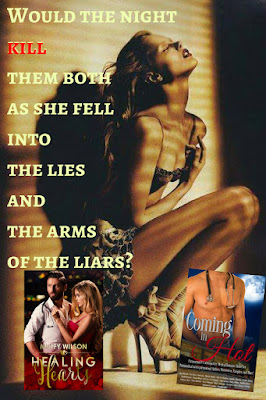 Please Feel Free to Share
and
Please Leave a Review