Harlyn Colton has never run from a fight, not until her best friend’s murder sends her to the mountains of Pennsylvania. Shredding her ID and ditching electronics, she assumes she’s bought time to sort the mystery before federal officers knock on her door.

When a kickass, knife-wielding female arrives with a target on her back, the group closes ranks to protect one of their own.

Accidents stack up while dead bodies reveal conflicting evidence. With the help of her K9 companion and the distraction of a well-intended protector, Harlyn must uncover the identity of the killer before he eliminates his final witness. Harlyn. 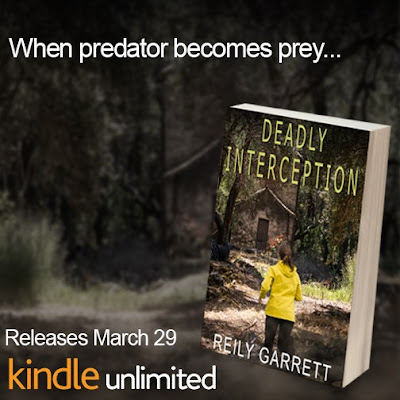 Harlyn bristled under the weight of unknown eyes dissecting her every move. Skin at her nape crawled from the mal intent focused in her direction. From behind the trunk of a spreading oak, she scanned the isolated meadow in search of the unknown threat.

It’d been years since she’d turned the tables on a predator intent on breaking her. Preparation for round two increased self-awareness and steadied the hand resting on her knife’s hilt.

Tonight’s mission to gather evidence had equated to a lark during the light of day. Under a full moon casting splintered shadows through fragmented clouds, the self-assigned task plunged her into doubt and uncertainty. She was an electrician—not a spy.

There! Approaching from the south side.

The dark shadow’s stealthy grace offered no indication of gender or intent. Neither Dylan nor Lonnie should’ve reached the trailer, yet.

Reily Garrett is a writer, mother, and companion to three long coat German shepherds. When not working with her dogs, she's sitting at her desk with her furkids by her side.

"This could be James Patterson, Lee Child, and Tess Gerritsen rolled into one, but the dark, twisted methods used by the serial killer could surprise even those readers..." - San Francisco Bay Review

Prior experience in the Military Police, private investigations, and as an ICU nurse gives her fiction a real-world flavor.