#CookingWithRachel: Ratatouille (and an excerpt from Wanted)! 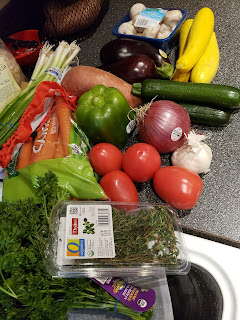 : a seasoned stew made of eggplant, tomatoes, green peppers, squash, and sometimes meat.
Let's be honest. Ratatouille is a GREAT way to clean out the vegetables in your fridge begging not to be tossed. As long as you have garlic, you can cobble together a batch. It's as simple as gathering your ingredients, slicing them up (in pretty, concentric pieces if you want to create a statement dish to WOW your guests; meanwhile, cubed and done up as a stew tastes just as fabulous). For this most recent batch I made (as pictured), I used yellow and zucchini squash, eggplant, button mushrooms, sweet potato, carrot, bell pepper, tomato, and red onion. Flavoring came from garlic, green onion, fresh thyme, and parsley, which I sauteed down before layering in the sliced vegetables. Cover for first 20 minutes of baking to encourage steaming, then uncovered until the veggies are all done. Can be eaten alone, or as a hearty side. If you have some red wine on hand to add to the steaming liquid, even better! 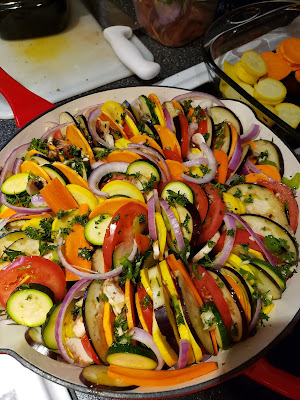 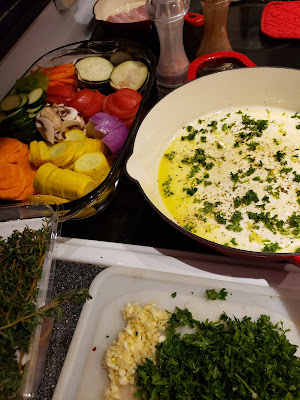 I like to include cooking escapades in my books when writing. In my latest release Wanted, I have (what I think) is a fun excerpt between Gypsy and her young niece...EXCERPT:

Abandoning the food prep for packing her suitcase, Gypsy froze when she heard Tina’s small voice behind her.

Shit. In her manic state, she’d forgotten her niece. Gypsy was letting the “old” her decide her current actions, which translated to get the hell out of Dodge. Except, she couldn’t do that this time. Because this time she had responsibilities. She had Tina.

“Oh, hi. Are you done reading and sunning already?” Her brain raced for any excuse. “I was checking my stash of fall clothes. What do you say to some real shopping before school starts? We could call a cab to the bus station in the morning, then hitch a ride into Spartanburg and hit the mall.” Even as she began voicing plans, a part of her brain was checking her bank balance and questioning how smart this was. She could take the Mustang, she supposed, now that she had a license again, but that would be relying on his graciousness. Something lacking of late.

“Um, yeah, it’s getting warm out there and I figured dinner would be ready soon so I’d come in and clean up—”

“Shit, dinner!” Remembering the state she’d abandoned the kitchen in with her moment of panic, Gypsy found it all too much. She slumped onto the edge of the bed then buried her head in her hands.

“Hey, are you okay?” Tina came over to console her. “What’s wrong?”

“I don’t know how to do this, Tina,” she confessed in a blubbery sob. “I can’t even keep my own crap in order, how am I supposed to take care of you?”

Small arms slid in around her waist and tightened as Tina whispered, “We’ll figure it out together, Aunt G. For what it’s worth, you’re doing great so far.”

Tina pulled back and smiled. “Yeah.”

“And you’re not such a bad aunt… when you feed me. I’m starved. When do we eat?”

Gypsy snorted hard enough a bubble of snot escaped her nose, which sent both of them into a fit of disgusted laughter as she lunged for the tissue box. Once she’d dealt with her nose, she nodded toward the door.

“Come on, we’ll eat faster if you come help me.”

“Let me change and put my book away, and I’ll meet ya in the kitchen.”

Gypsy had already washed and dried her hands, and resumed slicing the vegetables into thin discs when Tina joined her. “Hands clean before you touch anything,” she directed her niece, earning her the eye roll Tina had perfected.

“Did it upstairs. Where can I start?”

Setting the knife on the cutting board, she assessed the kitchen and what was left to do. “The garlic spread should be softened, so you can go ahead and get the bread ready to toast right before we eat. The cheese is in the fridge still. After that, we’ll need to get the pasta pot ready to go once this goes in the oven.” Gypsy indicated the baking dish to her right. “The ratatouille will take about an hour.”

“The rat what?” An expression of abject horror appeared on Tina’s face.

Pointing at the pile of vegetables in front of her, Gypsy refrained from laughing and described the dish. The girl’s face relaxed at the mention of tomatoes, herbs, and garlic.

“I promise. Can you pass me the bowl of tomatoes next to you?”

Tina did as asked, and the two of them settled into a serene silence while they worked side by side. It took them about twenty minutes before Gypsy was sliding the artisan-looking pinwheel of veggies into the oven and setting the timer.

“Thanks for your help, kiddo. Did you have fun?”

“I did actually. Thanks for letting me help. Anything else I can do?”

“Nah, I’ll handle the clean-up. You can take off, just be back in about an hour if you want your meal hot.”

Not that it would taste bad reheated, or even cold, which is why it was one of her chosen recipes. So Hyde could fit a real meal into his nocturnal hours.

The quick, unprompted hug Tina gave her before she darted off left Gypsy with a warm spot in her chest, and she set about cleaning. Several minutes later, while humming to herself as she wiped down the counters, an icy shiver wracked her body, and she turned to find the blonde watching her from the doorway. 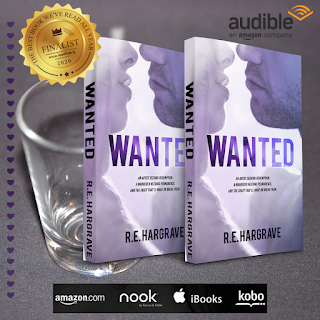 Being designated the guardian of her young niece Tina is the last thing Gypsy Hartford expected. But when the State of South Carolina unceremoniously puts Tina in her care, Gypsy accepts it’s time to grow up and stop floating from town to town. Where does she start when she has no degree, no real friends, and no family besides Tina?

A want ad could be the answer to both their conundrums. Or it might open a whole new can of worms. Especially when you throw in a crazed author with an unhealthy obsession for her narrator.

Email ThisBlogThis!Share to TwitterShare to FacebookShare to Pinterest
Labels: #CookingWithRachel