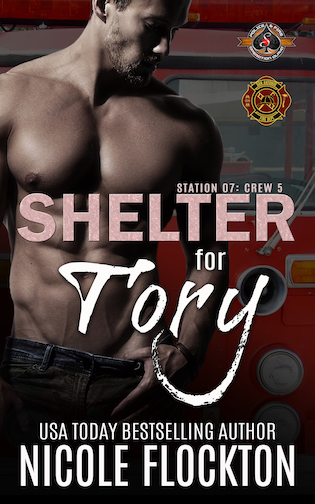 Tory Chapman wants what every girl dreams of: the love of a man who would walk through fire for her. Unfortunately, her shyness, as well as being a total brainiac are not the winning formula to find Mr. Right. But she does have a knack for locating Mr. Wrong, and this time he turns out to be a cocky firefighter with a killer Australian accent.
Shane “Mick” Hall loves working with the San Antonio Fire Dept., but with his contract ending and no signs of an extension, he has to make some big decisions. San Antonio is home to him now and the last thing he wants to do is go back to Australia. With his life up in the air, he doesn’t have time to start a serious relationship. No matter how right it feels.
Thrown together to organize a joint fundraiser, Mick and Tory spend a lot of time together. Soon they can’t deny the intense attraction burning inside of them. When trouble comes knocking at Tory’s door, Mick will do everything to keep her safe. But will it be enough?

Goodreads / Amazon
—
EXCERPT:
Over by the grill chatting were Driftwood, Chief, Taco and…she paused and squinted. Standing with them was a man she didn’t recognize. It was strange considering she’d been friends with the guys from Station 7 for ages, ever since Sophie and Chief got together. Then again, at most of the social gatherings where she could’ve met him she’d sequestered herself away from the crowd. Or she’d found a reason not to attend. Those reasons were becoming harder and harder to come up with, hence why she was now standing in Quinn’s backyard.
From her vantage point, she could make out that he had to be a fire fighter too. His shoulders were wide and looked like he’d be able to squat while holding a tree truck across them without breaking a sweat. His shirt sleeves were so tight around his biceps it was a surprise they weren’t ripping Hulk style. His shoulders tapered down in the classic swimmer’s reverse triangle, and his legs were just as impressive as his shoulders.
The guy was built, and if he came barreling into a burning house to rescue her, she wouldn’t turn down his help.
He threw his head back and laughed at something Taco said and a spark of desire billowed to life in her belly.
What the hell? A guy laughing had never turned her on before. She was drinking lemonade, so alcohol couldn’t be blamed for this immediate response to the stranger’s laugh.
As much as she wanted to step out of her comfort zone, that guy had danger and trouble written all over him. He looked like a guy who had a large personality and the woman who was his perfect match, wouldn’t be a wallflower like her. She needed to stay as far away from him as possible.
Hmm. But he was fine to look at.
Perhaps going inside again would be better for her. Maybe she could see if Beth was there somewhere.
Unfortunately the message wasn’t travelling down from her synapses in her brain to her feet. They remained glued to the spot and her attention remained locked on the group of men.
As if he was aware of her scrutiny, the mystery man looked up and their gazes connected. For years she’d doubted what she’d read in her favorite romance books, where the characters both claimed the world stopped spinning the second their eyes clashed. That they were captivated by just a single glance.
Well right this second, Tory had no idea what was going on around her. Her attention was focused on this hulk of a man and he seemed to be having the same reaction.

USA Today Bestselling author Nicole Flockton writes sexy contemporary romances, seducing you one kiss at a time as you turn the pages. Nicole likes nothing better than taking characters and creating unique situations where they fight to find their true love.
On her first school report her teacher noted "Nicole likes to tell her own stories". It wasn’t until after the birth of her first child and after having fun on a romance community forum that she finally decided to take the plunge and write a book.
Apart from writing Nicole is busy looking after her very own hero – her wonderfully supportive husband, and two fabulous kids. She also enjoys watching sports and, of course, reading.
Website / Goodreads / Facebook / Twitter / Amazon / Newsletter