BOOK BLITZ: The Art of Serendipity by Karen Anne #GIVEAWAY 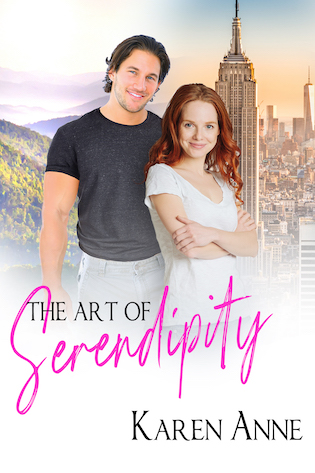 Lorelei Parker has her dream job teaching AP English at an elite prep school on the upper east side. Between her love of literature & moderating the school drama club, Lorelei is more than content. But when her star student is caught with drugs and expelled, Lorelei discovers life is about to become as complicated as one of her books.
When a call from his ex-wife alerts him that his son has just been kicked out of the prestigious Astley Academy, Jack Flynn’s quiet life on his ranch in North Carolina is uprooted. Not knowing how to fix Brodie’s shattered senior year, he takes his son under his wing, hoping life on the ranch and some hard work will be a way to reach the son he feels he’s lost.
The last thing Lorelei expected was an email from Jack Flynn asking her advice on how to help his son, Brodie. So begins an email exchange between the two that unlocks a secret, a way to get Brodie back on track, and a budding romance that can only be described as serendipity.

Goodreads / Amazon
—
EXCERPT:
He got out of the stall and walked close to me. I drew in a breath as I took him in. He had on a blue button down chambray shirt with the sleeves rolled up and black jeans.
He walked right up to me, and for a minute, I thought he was going to kiss me, but he didn’t. He just stared into my eyes long enough to make my stomach do a flip. “How’d you sleep?” he asked, and I was surprised by his question.
“Great. Woke up early.”
“Me too.” His gaze fell to my mouth, and I felt that pang of longing remembering what it was like to be in his arms last night, to have his full lips move across mine. “Are you ready to meet the other horses?” he asked, and I blinked back at him, registering the fact that he still wasn’t kissing me.
“Uh, yeah.”
He walked around the bend to another row of stalls. “We have twenty-four horses on the ranch, including little Rosie. Of those, fifteen are used for riding lessons, trails and so forth.”
Jack walked down the aisle, pointing out the various breeds and discussing their personalities. He knew so much about each individual horse, just as I could easily discuss any of my students at length.
“This is Annabelle. Very sweet temperament. She’s seven years old, knows the trail well. She won’t get you lost, so don’t you worry.”
“I’m sorry, what?”
“I wasn’t sure if you had ever been on a horse before, so I wanted to pick one you’d be very comfortable on.”
“You want me to ride her?”
“Well, yeah. This is a ranch.” He rested a hand on his belt buckle and laughed. “How else did you think we’d get up the mountain?”
“I thought we were going to hike up the mountain.”
Jack glanced down at my boots. “And those are the boots you chose for hiking?”
My ears prickled with heat. I glanced down at Jack’s boots, noting the spurs. “Why didn’t you say we’d be horseback riding?”
“I’m sorry. I really thought it was obvious, but if you don’t want to then we don’t have to.”
“No… I want to.” I didn’t sound convincing.
“Have you ever ridden before?”
“Sure, when I was in fourth grade and the girl scouts took us to a dude ranch but halfway through one of the horses got spooked and stood up on its hind legs. There was a lot of screaming, and we all had to turn around and head back. Oh, and another time I rode a camel at a Renaissance fair, but it was just in a circle, and there was a guy leading the camel by a rope.”
“Well, a camel isn’t a horse. I think this experience will be a lot better.” He opened the gate in front of Annabelle’s stall and led her out. “She’s already been saddled. Go ahead, say hello.”
I laid my hands on her chestnut coat. The horse didn’t so much as flinch when I touched her, making me feel invisible. She was beautiful and powerful and apparently going to carry me up a mountain.
Jack led another horse out of a stall. It was pitch black and much bigger than Annabelle. He was magnificent. “Who’s this?”
“This is Midnight. He’s Rosie’s father.”
“Is Pebbles going to be upset to discover her man is out with another woman?”
“We won’t tell.” He took my purse off of my shoulder. “You won’t need this.” He walked over to the far wall and hung the purse on a hook then took a black helmet down and handed it to me. “Put this on. It straps under your chin.”
I took the helmet from his hands and frowned like a child. “You’re not wearing a helmet.”
“I’ve been riding since I could walk, and Midnight knows me. I raised him. I know every bend and dip in the trail.” He took the helmet from my hands, placed it on my head, and fastened the buckle beneath my chin. “You, my dear, are about to have a maiden voyage, and I can’t take a risk with such precious cargo.”
He held my face up by my chin, studying me for a moment. My heart rate began to accelerate. Whatever Jack Flynn was doing, he was quite good at it. I really hoped I pulled off equestrian chic in that hat. At the very least, I’d settle for cute. He winked and dropped his hand, releasing me from his physical hold, but mentally, I was tethered to Jack and blindly about to trust him as he led me up a mountain.

Karen Anne was writing before she could read. As a toddler, she sat with a book in her hands and made up the stories, eager for the day when she'd find out if it all truly ended in happily ever after. Karen still determines the destiny of other people's lives, but this time, the characters are her own.
She is a Contemporary Romance author who lives in New York.
Coffee drinker by day, wine enthusiast by night, she loves cats and deeply misses 90's grunge.
Facebook / Goodreads