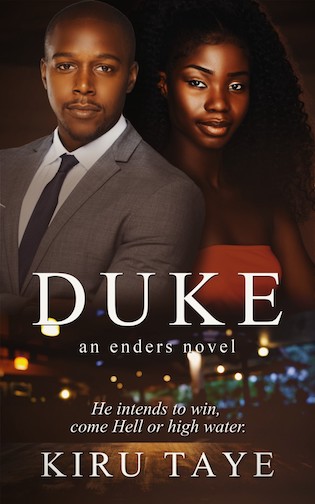 Duke’s life is about honour, loyalty and respect for the business.
Nothing else.
Yet…
One look at Carla across a crowded nightclub, and he breaks his own rules.
One night with the seductive woman who calls to him like no other, and he wants to keep her.
But…
His troubled angel is a mafia princess who lives dangerously on the edge.
She plays a desperate prank and sparks a cartel war.
Now…
Duke is in a high-stakes battle to keep everything he loves.
And he intends to win, come Hell or high water.

Goodreads / Amazon / Barnes & Noble / iBooks / Kobo
—
EXCERPT:
“Do you come to Club Arufin often?” she asked, attempting to make conversation. The silence unnerved her.
“No,” he replied with a grunt.
Jide didn’t say a word or flick his gaze at her in the rear-view mirror.
Interesting. Her chauffeur wouldn’t be quiet. When she wasn’t on the phone, they would chat or listen to music on the stereo. She could pull her ear pods from her purse and listen. But she would rather talk to this sexy man.
“My friend and I go there almost every weekend,” she tried again, hoping he enjoyed listening to her voice as much as she wanted to hear his. “We’re local, so it’s our joint. But some other people travel a long way to visit Arufin. Even tourists from different countries, all to have the experience. What about you? Do you live in Lori Osa?”
Triple-D said nothing, his neutral expression unchanged.
Seriously, did this guy never lose his cool?
Carla couldn’t be this unruffled to save her life. But if the man wouldn’t budge, then she had to shut up and find another way to get comfortable. She shifted until their bodies touched and tugged her legs onto the leather seat.
As if he knew what she needed, he settled his arm around her shoulder.
She relaxed, warmth spreading through her body. There was something deeply satisfying and comforting about having his arms around her body, making her feel safe as if she could trust him. As if she could give more than her body to him.
The quiet reassurance seemed more potent than a thousand platitudes.
She drew in a deep breath and filled her nostrils with his warm, masculine scent. He hadn’t been in the club long enough for his fresh smell to be polluted, which reminded her that she’d bagged the best man available.
She snuggled deeper, wanting to burrow under his skin, to mark him, so her scent lingered on him and acted as a deterrent to others.
What was wrong with her? She’d met the man less than two hours ago, and she never got attached to hook-ups?
Because this was a hook-up, right? It couldn’t be anything more.
So why was she clinging onto his body and nuzzling him as if she was a cat, hoping he would take her home for keeps and make her purr with pleasure?
Seriously, what was this about?
Yet with all the berating, she couldn’t bring herself to untangle from him, couldn’t bring herself to pull away.
He was too damned secure and comfortable.
“You finally stopped talking,” Mr Triple-D’s seductively low voice drew her from her thoughts.
Tilting her head, she met his gaze. Breath caught in her throat, her stomach tightening.
Mr Dark Dangerous and Decadent was smiling—the kind that made his dark eyes sparkle and indented his cheeks with dimples that would charm old ladies.
Then there were those sensuous lips. Lips designed to claim and caress, to cajole and conquer, to whisper words of arousal or comfort.
She was a goner. Heart-racing, panty-melted goner. 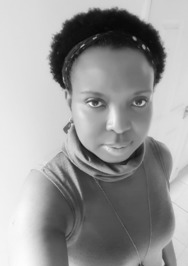 Kiru wanted to read stories about Africans falling in love. When she couldn’t find those books, she decided to write the stories she wanted to read. Her stories are sensual, her characters are flawed and sometimes she adds a dash of exciting suspense.
She is the founder of Love Africa Press and co-founder of Romance Writers of West Africa.
When she’s not being a writer/publisher/boss-lady, she is also a wife/mother/sister/daughter/aunt/niece/friend somewhere in the south of England.
Website / Goodreads / Facebook / Twitter / Instagram / Bookbub / Pinterest / Newsletter