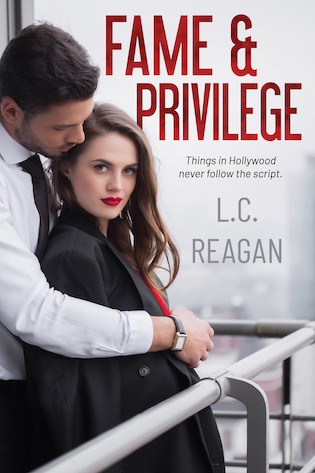 Billionaire Jenn Cooper has run her own movie studio for the last 3 years with the utmost success. Everything in her life has been easy due to the wealth and privilege she’s been afforded. Ryan Price is a young and talented manager in Hollywood who represents up-and-coming starlet Julia Belle. What will happen when Price and Cooper try to collaborate on one of Hollywood’s most promising stories to date? Let’s just say that things in Hollywood never follow the script.

Goodreads / Amazon
—
EXCERPT:
Stepping inside, Ryan was immediately overwhelmed by a very feminine scent, one he realized was coming from Jenn herself. It was intoxicating.
Jenn rose from her chair and came around her desk to greet Ryan. She was smaller than he had expected her to be; from the photos he had seen and the articles he had read, Jenn came across as larger than life. No doubt, her presence and personality would ring true to that stature.
“Ryan, it is so nice to meet you. My father has said wonderful things about working with you, and he does not give out praise lightly.”
Ryan shook her hand, and a feeling of excitement ran through his body. This woman was gorgeous and perfectly put together; and his body was absolutely aware of it.
“Thank you,” he said, flashing his dimples, trying to gain back some control of his libido. “It’s nice to meet you as well, Jenn. Since meeting and working with your father, I’ve been looking forward to crossing paths with you.”
“Have a seat. Tell me what you’d like to discuss,” she said as she rounded her desk to take her seat, her professionalism never wavering. Ryan was not shy about taking the opportunity to watch her walk away as he sat down, and he was not disappointed.
“You know I represent Julia Belle,” he said confidently, settling into the chair across from Jenn’s desk.
“Yes, and I’ve heard good things about her from my father. It doesn’t hurt that the media is labeling her the next Jennifer Lawrence either. Lucky for you,” she said coyly, in a way that made Ryan she was teasing him a bit.
“Yes, that moniker has not passed me by,” he laughed. “But, the reason I wanted to meet with you is to discuss Julia’s career. I know you’ve seen her acting work, but what you haven’t seen is her writing. She shared a script with me that I think could be an excellent fit for Cooper Pictures. Female-driven, dramatic, heartfelt, and based on a true story.”
Jenn arched an eyebrow at him, deducing what he was saying.
“You want to make Julia the next female hyphenate success,” she said without a hint of question to the sentence.
Direct and to the point. I like that.
“Yes. And I want Cooper Pictures to be the studio behind that success.”
“I’m not in the habit of taking credit for the success of other strong women in this industry,” she countered.
“And I appreciate that fact. All I’m asking is that you take a look at the script. I have a copy for you here. Read it, and if you hate it, I’ll drop the subject. Although I’d still like to find some way to work with you,” he finished, somewhat flirtatiously.
Jenn studied him for a moment, and a look of amusement crossed her face.
“Alright. I’ll read it. But this is all on spec. I can’t make you any promises.”
“That’s all I’m asking,” he confirmed.
“I’ll get back to you in a few days. If I’m interested, I’ll have Alicia set up a dinner for us to discuss things.”
“Perfect. Thank you, Jenn. I look forward to hearing from you,” Ryan said as he stood to leave. Reaching across the desk to hand Jenn the script, his eyes couldn’t help glancing down to catch a glimpse of her cleavage, and he felt his blood rush south.
Jenn met his eyes across the desk with a smoldering smile.
“Oh, you’ll definitely be hearing from me.”