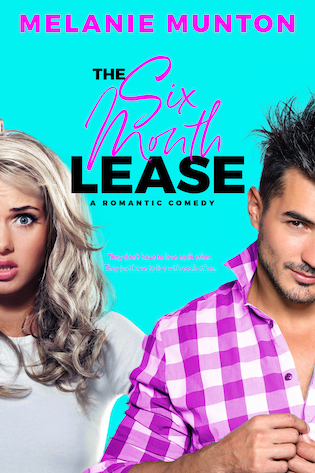 Never have I ever…moved in with a guy after dating him for only three weeks.
Just kidding. That’s exactly what I did.
And like most of you are probably thinking, it inevitably blew up in my face when we broke up two days after signing our lease.
Now, I’m stuck living with my ex. The same man who turned my life completely upside down in record time.
For. Six. Whole. Months.
It doesn’t matter how many times he flashes those abs at me after a shower, or how close his bedroom is to mine. I will resist him because he’s simply not the right guy for me.
But if I thought he’d done a number on me before, that’s nothing compared to what happens after I finally learn the secret he’s been keeping from me this entire time.

Goodreads / Amazon / Barnes & Noble / iBooks / Kobo
—
EXCERPT:
The hair on the back of my neck stands on end for about the seventeenth time in the past twenty minutes. So, I know that West is watching me from his position on the opposite end of the patio, where I know he’s been talking to a cute little redhead for the past four or so minutes.
Not like I’m keeping track or anything.
Not like he’s keeping track of me either.
His predatory eyes have not been stalking me through the crowd, his powerful, agile body moving like a lithe jaguar. Or a sleek panther. He’s not gnashing his teeth at every male who comes within five feet of me. And he’s certainly not resisting the urge to bound over here and piss a territorial circle around me.
He’s like a damn jungle cat.
Every man at this party might as well be his prey. His body language has signaled that he sees every walking penis as a threat. He might as well roar out his possessiveness and declare his rank in the food chain to the rest of the jungle.
When our gazes collide, something distinctly male and dominant gleams from his features. In that moment, I feel like I’ve been marked. Sirens start blaring in my head.
Danger! Danger! Danger!
“Would you please excuse me, Darren? I’m in need of a refill.”
He politely dips his head, just like the southern gentleman I’m sure his momma raised him to be. “Of course.”
Damn, he’s too nice. Why can’t I be into nice? I used to be. What the hell happened?
West.
That prick.
I find a quiet bubble where I can gather my thoughts at the far corner of the house. There’s enough seclusion that no one will accidentally stumble upon me, yet I can still hear the low hum of the party behind me. I’m staring down at my shadow in the grass when someone steps into the path of the patio lights, shrouding my secluded bubble in darkness.
Of course, he would follow me.
Because he’s become an expert at doing the exact opposite of what I want—like leaving me the hell alone. And the way his hulking shadow looms over mine is reflective of how little control I have over the situation.
West is like my own shadow.
Permanent. Trails in my wake. Undetachable.
When I twist around, I take a deliberate step back, needing that distance.
“Looks like I’ve caught myself a little social butterfly,” he grates in a low voice.
His eyes are narrowed. “Let’s talk, Harper.”
I push my hands into the pockets of my shorts, striving for confidence. “So talk.”
He snorts. “While I’ve loved your flare for exhibitionism in the past, let’s keep it private this time, shall we?”
He snags my arm and starts pulling me away from the patio before I can release the mile-long tirade poised on my tongue.
I am not an exhibitionist. We made out in an alley once. And he took some naked pictures of me on his phone once. Pictures he better have fucking deleted, or there’s going to be a nasty castration in his future.
Before we broke up, Sloane and Carter invited us over here for dinner a couple of times, so West knows his way around the property. Which is why he knows exactly where the lush gardens are and how to navigate their maze of foliage. Maintaining his hold on my arm, he drags us down the gravel path until the patio and party are no longer visible through the mass of palm fronds, hedges, and azalea bushes.
The only reason I’ve let him manhandle me up to this point is because I don’t want to make a scene at my friend’s party. I don’t want to be that couple. Not that we are a couple. Not even a little.
But no one can see us now.
And enough is enough.
I rip my arm out of his grip, my feet planting roots in the ground. “Knock it off, West. Isn’t this pissing contest routine of yours getting a little old?”
With his back facing me, he sucks in a deep breath and blows it out. The sight of his broad shoulders rising and falling with the movement mesmerizes me. I remember how sturdy those shoulders were whenever I used them as leverage to grind over his lap. It doesn’t help that the mint green button-down he’s wearing happens to be my favorite shirt of his.
A fact I know he remembers.
When his body whirls around to face me, his eyes are fierce and alert. “When have I ever given you the impression that I need to whip out a measuring stick just to get my dick wet? That pounding my chest and backing down every other man in the room somehow gets me off? Huh? When?”
“Are you serious? Uh, the night at the house in front of Emerson, for one. Tonight, for two.”
“The night with Emerson was about me not wanting to witness, in my own home, how badly other men want to fuck you,” he snaps. “My own friends.”
I swallow.
The edges in his voice are sharp. Sharp enough to cut me if I don’t maintain my distance. Which proves difficult when he starts advancing on me, forcing me to retreat.
“And tonight is about me losing control because I’m being forced to finally accept that other men do want to fuck you.” My back hits a tree. “And will fuck you. At some point in the future, it’s going to happen.” He slaps his hands against the bark, his arms caging me in. “Because I’m no longer the one who is fucking you.”


Traveler. Reader. Beach-goer. St. Louis Cardinals fan. Pasta-obsessed. North Carolina resident. Sarcastic. Bit of a nerd.
Author of the Cruz Brothers, Possession and Politics, and Timid Souls series, Melanie loves all things romance, comedies and suspense in particular because it’s boring to only stick to one sub-genre! From light-hearted comedies to sexy thrillers, she likes to mix it up, but loves her some strong alpha males and sassy heroines.
Go visit Melanie’s website and sign up for her newsletter to stay updated on release dates, teasers, and other details for all of her projects!