COVER REVEAL: Under These Restless Skies by Lissa Bryan

Coming soon, a new historical romance from Lissa Bryan set in the days of Henry VIII and Anne Boleyn, Under These Restless Skies.

Will Somers has always thought himself unlovable. When he encounters a creature of myth and magic, he seizes the chance to finally have a wife and family of his own. Emma is a selkie—one of the immortal fae-folk of the sea—bound to Will by the magic of her kind, and eager to learn about life on land. She has to learn to adapt quickly to human customs, because Will is headed for the court of Henry VIII, to serve as the king’s fool. It’s a glittering, dangerous world, where a careless word can lead to the scaffold and the smallest of gestures is loaded with political implications. Anne Boleyn is charmed by Emma’s naïveté and soothing selkie magic and wants Emma for her own fool. Can Will protect his newfound love from the dangers that lurk in every shadow? Circa regna tonat: around the throne, the thunder rolls.

And now, for the cover! 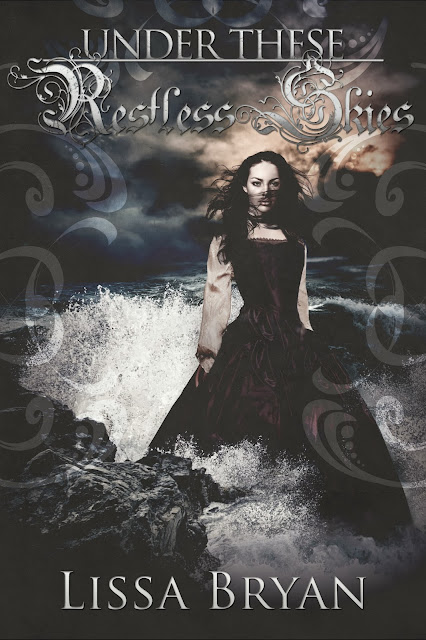 Made by Mayhem Cover Creations

They came to the doorway of the presence chamber. Fermor gave his name to the steward.
The man flipped through a list. “Oh, aye. Fermor.”
“Correct, my lord. I am come to bring His Majesty a gift.”
“A fool, was it?”
Fermor gestured at Will. “And a fine one at that.”
The steward did not seem impressed. “Go and come again tomorrow. His Majesty is in a temper today.”
The king’s visit with his sister must not have ended well. Fermor sputtered, panicking as he saw his chances slip away.

“ ’Twould seem the best time for him to be regaled by a fool’s antics,” Will noted.
The steward stared at Will for a moment and then gave a slight smile. “This way.” He led them through a tapestry-covered door through the empty presence chamber. Will paused, awed by the sight of the throne—the symbol of the king’s power—wide and heavy, gilded and jeweled, set on a carpeted dais. Beside it was a smaller throne for the queen, and over both were canopies bearing the coat of arms of each. The steward bowed to the empty throne as they passed, and they copied him before continuing out into a smaller gallery.
“Tarry here,” the steward instructed. “The king is at cards with the Lady Pembroke. You will be called to him when he is finished.”
Will’s stomach churned. He’d never felt less amusing in his life, and his wits were logy. A horrifying thought occurred to him. If he was unable to persuade the king to take him on, he wouldn’t be able to keep Emma. He couldn’t take her with him if he returned to the comedy troupe. Panic made his mind blank for a moment, and he did not hear his name called. Fermor elbowed him, and Will stumbled to his feet and followed the steward into a chamber.
Will didn’t have much of a chance to survey his surroundings. He had an impression of tapestries over dark wood paneling and the glitter of gold, but his eyes were on the floor in front of two figures seated in x-shaped chairs. He knelt.
“Your Majesty, Lady Pembroke, if it pleases Your Graces, I present Master Richard Fermor and Will Somers.” 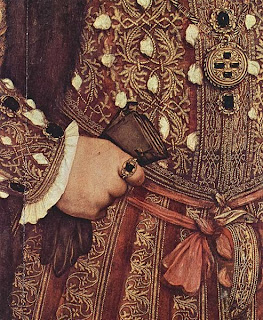 “Rise,” the king said. Will stole a glance at him and saw a large, but still muscular man with thinning reddish-blond hair, dressed in a dark brown velvet doublet, ornamented with pearls and gold frogs. The king had gained weight in the last few years, and to disguise it he had widened the shoulders of his surcoats. Will had to admit the effect was powerful. His large codpiece jutted up from the center slit of his doublet, also meant to convey power, or at least, virility. His eyes were small, a piercing blue-gray. Will caught a glimpse of them before he lowered his gaze to the floor.
“So, Fermor, you have brought me a fool.” The king’s voice was low and gruff, and he didn’t sound much interested. The lady seated at his side wore a French hood and an initial pendant attached to her strand of pearls, the letters “AB” twined together. She was garbed in a dressing gown of brilliant scarlet, trimmed in ermine. It was casual raiment only the highest nobility was entitled to wear outside their own bedchamber, but Anne Boleyn was now royal in all but name. Just weeks ago, the king had created her Marquess of Pembroke, the highest noble title in the land. She patted the small dog in her lap.
“Aye, your majesty,” Fermor said. “If it pleases Your Grace.”
“Well, fool, what can you do?”
Will was startled. He hadn’t expected the king to speak to him. “I—I can juggle, Your Majesty,” he croaked. “I can make jests, tumble, and sing a little.”
“Let us see it, then.”
Will’s hands trembled as he withdrew the balls from his bag. “If it pleases Your Majesty,” he started. He straightened his shoulders as best he could, and said in his haughtiest tone, “I, Will Somers, am the best juggler in England.”
The king snorted and Will hoped it was from amusement. He fell into his act, bragging about his abilities while seeming to lose track of his juggling and keeping the balls in the air seemingly by accident alone. He was grateful he had performed this particular act so many times, because he thought he’d completely forgotten his lines, but they slipped from his mouth of their own accord, and his limbs seemed to move themselves. The king guffawed a couple of times, and he thought he heard Anne laugh at one point. Will ended with one of the balls balanced on the tip of his nose, before dropping it into his hands and sweeping low into a bow.

“Well done, Master Fool,” the king said, and he seemed a bit more jovial than he had when Will first entered the room. Or perhaps it was wishful thinking on Will’s part. “But tell me this: I have fools already who can juggle and make jests. Why would I wish to have you at my court? What have you to offer that they do not?”
The answer popped from Will’s mouth as though he had rehearsed it. “Because I will do something none of your council, lords and ladies, nor servants will do.”
The king lifted an eyebrow. “And what might that be?”
“I will tell you the truth, Your Majesty.”
Fermor gasped. Anne burst into laughter. “Oh, I do like him.”
The king cast an amused glance at her. “Is that so, Master Fool? Then perhaps you are worth it, after all.”
“But you must make an oath to me,” Will said.
The king’s eyes narrowed a bit, but he calmed when Anne giggled at Will’s audacity. “What?”
“You must swear it, as the word of a Christian king.” Will’s mouth was as dry as paper and his heart thudded in his chest, but he continued. “You must swear to me, on your honor, you will never hold it against me when I tell you the truth.”
The king stared at Will, his mouth agape, and then he burst into laughter. He slapped his knee and elbowed Anne, who gave him a sharp glance at being prodded by his arm, before she laughed along with him as a courtier trained to echo the king’s mirth.
“You have my word,” the king said, as he accepted a perfumed handkerchief from one of his serving lords to wipe away the tears seeping from his eyes. “Or must I write it out and put my royal seal to it?”
“Your word is sufficient for me,” Will replied.
“I am flattered at your trust, Master Fool,” the king said in solemn tones and burst into guffaws once again. “Go and have my steward find you rooms. Have you a wife?”
“I do.” Will’s mind whirled. He hadn’t expected this, and he didn’t want Emma to live at court, but there was nothing he could do. Refusing lodgings offered by the king would be a gross insult. 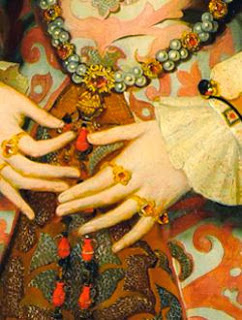 “Bring her tomorrow,” the king commanded. “I wish to see what the wife of a fool looks like.”
“Much like every other wife in England,” Will said, and that sent the king into laughter once more.
“Go, and come back on the morrow.” The king waved a hand at the steward. “Find him some decent garb, and some for Milady Fool as well.”
Will bowed deeply and followed the steward from the room. “And for you, Fermor,” he heard the king begin before the door was shut behind them. Will’s knees gave out and he collapsed to the floor. His head swam in sick circles. He sat back on his heels and looked up at the steward. “Pray, pardon,” he rasped.
The steward gave a slight smile. “You are not the first to react in such a manner.” He held out a hand and Will stared at it in surprise. The steward was a lord, and here he was, offering a hand to a baseborn commoner. Will took it, and the steward helped him to his feet and drew him near.

“If ever a man needed to hear the truth,” the steward whispered, “ ’tis that man in there.” He drew away again, and his manner was once more brisk and officious. “Follow me.”