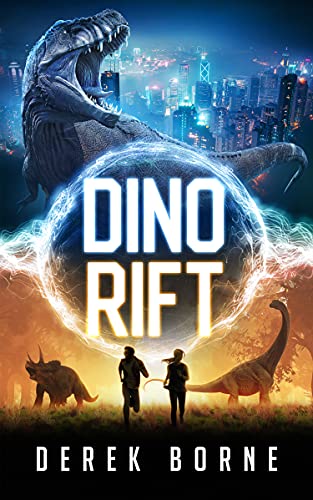 The Rift.
A gateway to a prehistoric world.
For years, SauraCorps has kept its existence confidential while touting themselves as a run-of-the-mill dinosaur museum.
For two Utah teens, Kamren and Vivienne, a care-free night to themselves quickly turns into a daunting trek through an exotic, unfamiliar time.
Not only do they stumble upon SauraCorps’ nefarious agenda, they also encounter major discrepancies concerning the past that would rewrite history books as we know them.
Kam and Viv’s reliance on each other through the primeval environment also tests their friendship in unexpected ways.
Will they survive and make it home…together?
Note: Dino-Rift is set in the same universe as Derek Borne's "The Ultimate Agent" series.
BUY THE BOOK
Add to your Goodreads TBR List
Add to your Bookbub Wish List
Reach out to Derek on Facebook to order signed copies (I did!)

While the editor in me found the multiple points of view in Dino-Rift shifting too rapidly, the reader in me who loves to get lost in an adventure LOVED THIS BOOK. Most of the time, I read, write, and edit in the romance genre, so when I was offered an ARC in exchange for an honest review, I jumped at the chance to dive into something different. Oh, boy, was this different.
Special, even.
With Dino-Rift, Borne did not just cobble some words together, slap on a cover, and call it a book. No, he masterfully created another world (two of them, actually), and it’s clear with every plot twist, the hand-drawn dino images, and attention to detail that he poured his heart and soul into this project. From the page-turning action (I lost sleep reading Dino-Rift) to the witty dialogue (nerdy trivia and quotes FTW), from the fresh innocence of young love to the emotional gauntlet of parental love, from the outlandish and unfathomable unknown of the past to the simple, yet often harsh, realities of the present and corporate greed, Dino-Rift has it all, and more.
Are YOU ready to Rift?