The Dragon’s Enforcer by Pixie Stormcrow 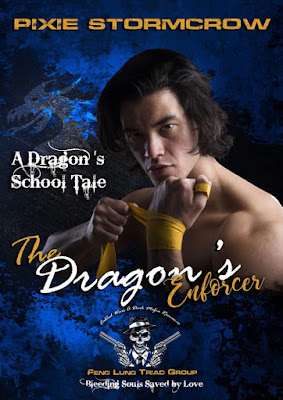 Charlotte Leung’s father, nicknamed Dragon Brother within the Hong Kong Triad, sent her overseas long ago to escape an underground life. But when he passes away, she returns to Hong Kong only to find that she is now the grand prize of a succession war. So before blood and violence can decide her future, she runs away, straight into the enemy faction’s territory.

Samuel Chan had made three major mistakes in his life. The first was running away from home to join the Ming Hain Tong Triad faction. The second was agreeing to let Big Brother train him to become an enforcer. The third was taking in the mysterious girl who stumbled into Big Brother’s training hall where he teaches. He should ditch her but something about his latest student brings out all his protective instincts. Now a world of trouble is heading for them both, and he must decide if he should be listening to his brain or his heart.

Because training the heir to the Dragons’ throne is only the beginning.

Bleeding Souls Saved by Love! A Fable Retelling of Training Your Dragon

PLEASE VOTE for this title in Goodreads Most Anticipated Romance Releases of July: https://www.goodreads.com/list/show/154715.July_2021_Most_Anticipated_Romance_Book_Releases

Be sure to join the Facebook Group to stay up to date with cover reveals, new releases, and general carousing as this amazing collection of Wicked Warriors MC & Fabled Mafia Wars fable retellings is unveiled: https://www.facebook.com/groups/bleedingsoulssavedbylove
Bleeding Souls Saved by Love!
Posted by From the desk of... R.E. Hargrave at 7/15/2021 07:30:00 AM