BLEEDING SOULS SAVED BY LOVE! Lost in the Woods by Jessica Joy #NowLive

Lost in the Woods by Jessica Joy 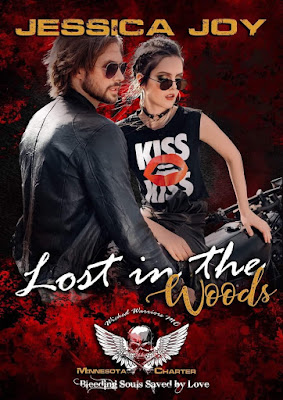 Wicked Warriors MC Minnesota Chapter (Wicked Bad Boy Biker Motorcycle Club Romance)
Having a famous older sister isn’t always as fabulous as it seems. The luster of her sister’s fame tarnished as soon as Astrid Daniels finds herself lost in the wild woods of Northern Minnesota when Margo seemingly falls off the face of the planet. The one bright side could absolutely be getting rescued by a Viking reincarnate on a motorcycle.
Bjorn “Pick” Kristiansen can count on two things in life: the thrill of the ride on his bike and the family feeling he gets with his brothers in the Wicked Warriors MC. But even Pick can’t get away from the expectations associated with being adopted by the Club Prez, Ice. Patch in or be cast out—Pick has one summer to make a decision that will impact the rest of his life. Things get interesting when his summer plans get turned upside down by a feisty woman who ropes him into helping her search for a lost pop star.
Maybe he's a little rough around the edges and has a strange relationship with his motorcycle, but he's easy on the eyes and the only one who can help find her sister.
Maybe she's a little naïve and has more stubborn than sense, but she's the first one to make him feel like he has a purpose in this life.
Getting lost in the woods might just end up being the very best way to spend a summer.
A Bleeding Souls Saved by Love! Fable Retelling of Frozen
GOODREADS BOOKBUB
BUY LINK
PLEASE VOTE for both titles in Goodreads Most Anticipated Romance Releases of July: https://www.goodreads.com/list/show/154715.July_2021_Most_Anticipated_Romance_Book_Releases

Be sure to join the Facebook Group to stay up to date with cover reveals, new releases, and general carousing as this amazing collection of Wicked Warriors MC & Fabled Mafia Wars fable retellings is unveiled: https://www.facebook.com/groups/bleedingsoulssavedbylove
Bleeding Souls Saved by Love!
Posted by From the desk of... R.E. Hargrave at 7/03/2021 09:00:00 AM