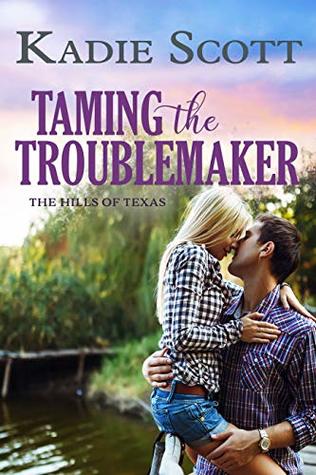 One daring kiss with the playboy tempts the good girl, but can she tame him?
Autry Hill may be a cowboy to his boots, but he’s also gained quite the reputation as a charmer and playboy. His parents aren’t sure he’s ready to take the reins of the family’s prosperous Texas ranch, so they set up a challenge: No women or scandal for the next six months and the ranch house he grew up in is his. Easy peasy, Autry thinks. He’s already tired of late nights and romancing, until elementary school teacher Beth Cooper happens to cross his path. Suddenly Autry is losing his heart, his mind, and what’s left of his reputation.
Good girl teacher Beth Cooper is far too practical to fall for Autry Hill, even if she had a crush on him way back when. The man’s been breaking hearts since middle school. But when he becomes her unexpected champion and then they work together to help one of Beth’s troubled students who’s about to lose everything, she sees a different side of Autry – serious, compassionate, determined and dedicated. And that Autry is nearly impossible to resist. Does she need to?

Goodreads / Amazon / Barnes & Noble / iBooks / Kobo
—
EXCERPT:
Autry made his way to the parking lot, happy to be heading home early. Getting punched by Lawson Miller in a bar had not been on his agenda tonight. Not retaliating had been a feat of inhuman control he hadn’t realized he possessed. He rubbed a hand over his cheek and hoped like hell he hadn’t got Michelle in a heap of trouble. He’d say this for Larson, the guy could sure pack a hell of a wallop.
“I’m getting too old for this shit,” he muttered, scrubbing a hand over his face. The dark growl of thunder nearby agreed with him. Good thing he was leaving early. Maybe he’d avoid the approaching storms and get home ahead of them.
Back to the ranch, the house that was nearly his, and the general restlessness he’d been experiencing for months now. Like he was standing at a crossroads, but none of the roads had signs, so he wasn’t sure which way to go. He’d seen how happy his siblings were, settling down with one person who knew them like no one else and loved them. Not that he was ready to settle down, by any means, but take the ranch and build up the dreams in his head? That he could do.
But first he needed to win this damn bet.
Tell that to Stella Aikens, who’d sidled up to him at the bar, obviously tipsy. “I saw what Larson did. How’s your poor face?” Not wanting to be rude, Autry had thanked her only to be landed with a hand on his thigh way too close to his crotch and a whispered, “I hear you’re amazing in bed…”
Holy shit. What happened to flirting? A little effort? He wasn’t some sure thing.
Granted, once upon a time, he would’ve taken Stella up on the invitation. Not because he was all that interested. More like why say no to what she was clearly offering? But that had been a hell of a long time ago. Had the women in La Colina County not got the message that he wasn’t into a quick fuck anymore?
He flipped his keys in his hands in restless twirls, hardly registering the tinkling sound of metal on metal as he did. Or maybe Mom’s right and I sowed my oats. Now I’m figuring out what’s important in life.
Autry gave a mental snort. No way was he telling his mother that her homespun sayings had actually sunk in at any point.
“Um, hi, Autry.”
The slightly nervous female voice pulled him out of his musings and Autry glanced up to find Beth Cooper sitting on the tailgate of a truck parked beside his. She slipped her heels back onto her bare feet and hopped down, teetering for a second on the uneven ground.
Immediately he reached out to steady her and his body stirred with interest, a reaction he shut down as quickly as it started. Beth with her big blue eyes and sweet personality. He’d put her squarely in the “off-limits” box way back in high school. The woman was an elementary school teacher for heaven’s sake, definitely not the girl he took behind the bleachers in the gym and…
Autry turned off that mental image with a haste born of desperation. Off-limits. He also realized he was staring at her, not having responded to her greeting. Beth was giving him that look, one that said she worried about him sometimes. He’d caught that look from her before.
“Hi, Beth.”
“Is this your truck?” The edge of nerves made itself present in the way she fluttered her hand as she waved at the Tundra beside them.
“Yes,” he said slowly.
She grimaced and mumbled something like, “Of course it would be you.” Only he wasn’t entirely sure that’s what she’d said. Then she tugged on her skirt, a nervous habit he recognized from when they were kids.
“So…” She gave him a cheery smile. “I have a funny story.”
Autry hid a sigh. After a hell of a couple weeks, leading up to a hell of a night with Larson and then Stella, he didn’t have time for whatever Beth thought was funny. “Beth, I need to go home. It’s a long drive.”
“That’s fine. I get it. But I need to explain why my purse is… um… is locked in your truck.”
Autry paused as her words sank in, then had to stop himself from taking a couple steps back as shock skittered through him. Beth Cooper—sweet, innocent Beth—was… hitting on him?