Hide and Seek, from the author of the Pierce Securities, has readers going ga-ga!

"This story makes you believe in love all over again."~~Goodreads reviewer: Sue

Joey was optimistic about his relationship with Simone, but she leaves him floundering in a sea of confusion when she suddenly dumps him. His mom is marrying a man younger than him, his station has him fundraising in a Santa suit, and there’s an arsonist loose in town. Then he sees her, the petite goddess who won't give him the time of day. Vivian has all the reasons in the world to not get involved with Joey, the biggest of which is her four-year-old daughter, Carly. Joey's made her a lot of promises, but after the issues she had with her ex, she just knows Joey is too good to be true. These two can't see what's right in front of them, but when the fuse is ignited, sometimes you just have to cling to someone and hope you survive. Hiding is not an option. 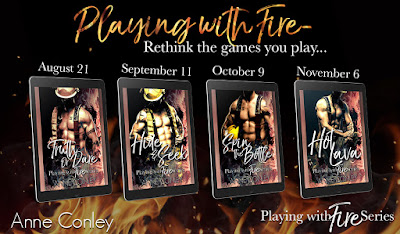 Joey was pretty sure he wasn’t the first hungover Santa ever, but even with a slight hangover, playing Santa Claus wasn’t sucking nearly as much as Joey had thought it would. He’d been pissing and moaning for nothing because, as it turned out, he was having fun.
None of the kids had peed on him, nobody had punched him in the gut to see if it was real, and they smelled way better than he’d thought they would. Especially the babies. Who knew babies smelled so good? 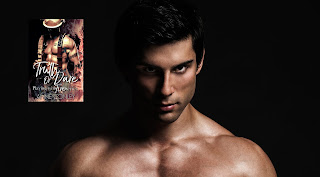 They cried a lot, but they didn’t stink. And who could blame them? He was a weird, jolly, bearded guy; the babies didn’t know he was supposed to bring them toys yet. As far as they knew, their mothers were just plopping them in his lap, standing back to take pictures, and laughing at how cute they were while they were freaking out. He would be mad too.
It was sort of sick, actually, but funny too.
He was wrestling with one particularly strong infant, making helpless shushing noises, when he got a whiff of the top of its head. Damn. Somebody should bottle that smell. It was certainly lowering his blood pressure. As he breathed in the scent of the baby as he held it against his chest, it quieted down, snuffling and rooting around in his giant, furry coat. The baby found its fingers, stuffing them into its mouth, and looked up at him. Joey thought for a second he had conquered it until its eyes squinted, it opened its mouth, and an ear-splitting wail pierced his ears.
He looked at the mom, who was gleefully taking pictures of her wailing baby, and finally said, “What does it want for Christmas?”
“She wants one of those tummy time pallets.” The mom smiled at him and spoke loud enough for the benefit of the other children in line. “Thanks so much, Santa.” Bless her. She retrieved her daughter from his lap, making room for the next child.
“Ho, ho, ho, Meeeeerrry Christmas!” He had a thing going and was playing it up. “What’s your name?”
The little girl in question was climbing onto his lap as if she were scaling a very serious mountain. When she was settled, she looked up at him with earnest brown eyes. He couldn’t resist tugging on one of her ponytails, crazy with curls.
“Carly,” she said simply. No smiles, no giggling. This was a serious kid, so he pulled a serious face in response.
“Have you been good this year?”
She nodded solemnly. “I have a question, Santa. Do you make presents for grownups?” Her voice had lowered to a conspiratorial whisper, and Joey leaned his own head closer to her.
It was fun, and this wasn’t the first kid to tell him secrets. One little boy had fessed up that he’d been bad but his baby brother had been worse than him this year, so Joey was ready for more secrets like that. He sort of enjoyed the idea of being in on something with the kids. The “us against them” games were more fun than he’d realized.
“Sometimes. Has the grownup been naughty or nice?”
“Oh, she’s been really nice. But Mommy works so hard and is always so sad and stressed. Can you bring her something to make her better?”
“I might have something I can bring her,” he said, feigning thoughtfulness. “Who’s your mommy?”
“Vivian Clarke.”
The little girl could have punched Joey in the gut and he wouldn’t have felt it for the air rushing out of him. Could it be the same Vivian he’d wanted to kiss the hell out of yesterday?

“Is she here?” He couldn’t resist. He wanted to see her again, and if she were here, that would be perfect. Maybe she wouldn’t recognize him dressed as Santa. Maybe he could do a little kissing under the mistletoe. Okay, his imagination got away with him on that one, but as he followed the tiny finger pointing to a woman standing not too far away, watching intently with an eyebrow raised, he saw she was in fact the very same Vivian, dressed casually in jeans and a sweater.
And now so much made sense with her. She didn’t date because she had a kid. Wait, was she married? He hadn’t seen a ring yesterday, which was why he’d done the full-court press thing with her. But if she were married, that was a no-go. Well, with the wealth of information right here, he should take advantage.

Anne has written her entire life and has the boxes of angst-filled journals and poetry to prove it. She’s been writing for public consumption for the past several years. She lives in rural East Texas with her husband and children in her own private oasis, where she prides herself in her complete lack of social skills, choosing instead to live with the people inside her head.
Currently, she has five romance series.  Playing with Fire explores the trials and tribulations of a small team of fire fighters in the fictional mountain town of Pamona Gulch. In Pierce Securities, she gives us Ryan, Evan, Miriam, Zack, Quinten, Jordan, Hollerman, and Simon. Her favorite series, Book B!tches, is all about a group of women in Mystic, Texas who get into all sorts of shenanigans. In Stories of Serendipity, she explores real people living real lives in small town Texas in a contemporary romance setting. In The Four Winds, she chronicles God’s four closest archangels, Uriel, Gabriel, Raphael, and Michael, falling in love and becoming human.
Follow her on the platform of your choosing!
Reader group:  https://www.facebook.com/groups/1346696508686306/
Amazon:  https://amzn.to/2NYhw62
Website/newsletter/blog: www.anneconley.com
Facebook:  www.facebook.com/anneconleyauthor
Twitter:  https://twitter.com/AnneConley10
Pinterest:  www.pinterest.com/anneconley
Goodreads:  https://www.goodreads.com/author/show/6907845.Anne_Conley
Follow on Instagram: anne.conley   https://www.instagram.com/anne.conley/
Bookbub: https://www.bookbub.com/authors/anne-conley
Posted by From the desk of... R.E. Hargrave at 9/12/2018 01:30:00 AM