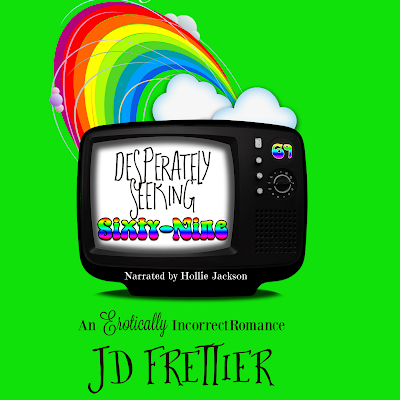 The year is 1969. Though there is war and unrest in the world, on August 15th, on a farm in upstate New York, a little concert will go down in history as the most famous music festival of our time: Woodstock. It also happens to be the day Bonnie McMillan and Peter Hampton meet and begin their free-spirited love-filled journey with each other. Fast forward forty-seven years. Bonnie unexpectedly passes after a night of hot sex and is whisked up to Purgatory, ‘The Green Room’ as they call it. Bonnie’s best friend meets her at the pearly green gates and the fun begins, from body sculpting to channeling. Follow Bonnie on her erotically incorrect quest to re-connect with the love of her life. Or at the very least, make sure the sex toys are hidden before the kids start sorting through her things!

How long have you been narrating?
Professionally? I’ve been narrating for over 3 years now. But I’ve been reading stories out loud for as long as I’ve been a reader. I was the kid in class first to raise my hand when the teacher asked for someone to read aloud. And I’m not ashamed to admit that I read out loud to my cats and my husband all the time. Usually in a silly accent.

What is your favorite genre to narrate and why?
Currently, my favorite genres are Urban Fantasy and just about anything Paranormal related. Horror, fantasy, sci-fi… I love all of these genres because the stories take you out of your norm and you have to suspend disbelief to get lost in the worlds. I particularly adore UF because it takes the element of the familiar (our world-ish) and asks “What if <xyz> was real?” I love the ideas behind a hidden world within our own where magic and non-human beings exist.

When you ‘get into character’ what movitates you?
That’s a good question! It truly depends on the character, to be honest. I try to find something to connect with in that character’s experience. Like, most of us can relate to the pain of having your heart broken by someone you love, or being embarrassed about something, feeling like you don’t belong… I try to find the human element and connect with it to make that character feel like a living, breathing being. I put myself in the character’s shoes and use that as the base.

Do you like input from your authors?
Always. I love when an author gives me characterizations for their creations. Accents, a little back story, how *the author* sees the characters. It gives me a jumping off point when I go into it because I know what the author is thinking in regards to their characters. That way, when I do the read through, I at least have an idea of what I should be expecting out of that particular character, if that makes sense.
On the flip side, I hate micromanagement. By that, I mean… give me your characterization, but let me interpret the performance, if that makes sense. A lot of authors fall into this trap where they envision themselves as both script-writer AND director, but forget that the best directors usually give their performers the autonomy to “perform”. You have to have the courage to let go and trust that I’m going to do right by your work, even if it isn’t exactly as you anticipated in your head while writing.

So, you got the audition request for Desperately Seeking Sixty-Nine. What made you accept it? Was there something about the story line that drew you in?
I was drawn in by the concept first, and the characters second. The first chapter hit me in such a visceral way. Even during the narration, there were two points specifically where I had to stop to recompose because the emotions of Pete just hit me in such a primal place I was literally in tears. But it was the balance of that with the humor that really drew me in. I love silly, over-the-top humor and was intrigued by the idea of playing an “older” character, as it were, with the same lust for life as someone much younger.

What drives Hollie Jackson?
Aside from my perpetual cheerleader Dragon? LOL. Honestly, I’m motivated by my fans, both authors and listeners. I feel like there are so many great stories out there that deserve to be experienced, but are only hitting one part of the market. There are a growing number of people who love the concept of reading a story and getting immersed in a world, but don’t have the time (or the abilities) to do so. My goal is to make sure that they get that chance. We live in a society founded by storytelling. History itself is a set of stories passed down. Oral storytelling is an art form, one I’m honored to be a part of.

Do you have a career outside of narrating?
Actually, aside from being co-author with Dragon on our own series, The Nemesis Chronicles, narration IS my career. I quit working my former job 3 years ago to go full-time with this, and I’m still going strong. I love what I do and honestly cannot see myself doing anything else.

How many audio books are in your repertoire?
Presently, almost 400, spanning 4 different companies. With another 100 or so in queue.

What is Hollie’s favorite thing to do?
Oh, man. If you ask Dragon, it’d be playing video games and surfing the web. But my favorite thing will always be reading. I always have a book or something nearby, not just the projects I work on.

Tell us something about yourself and your hobbies.
Something about myself… I have my bachelor’s degree in Psychology. It’s come in amazingly handy when dealing with society at large and the intricacies of human interaction. Hobby-wise… I do a lot of reading, I write, I edit. I’m a crafting hound. SO many crafts. I have, what has been affectionately dubbed around here as “Crafting ADD”. I knit, crochet, create polymer minis. I love video games, comics, general geekery. I have a thirst for learning languages (even if it feels like I never retain the info lol) and accents… I never thought I’d adore learning accents as much as I have, but I do. I love to cook and bake, and exploring new areas. Yeah, I’m an “Ooh, shiny!” brain kinda gal.

What does the future hold for Hollie Jackson?
Hopefully, more projects. But I would love to branch out into doing video voice over work. And, y’know, a commercial or two might be fun. I’ll always come back to audiobooks, though, because they’re where my real passion lies.

What is your favorite holiday and why?
This one is difficult because, generally? My favorite holidays encompass all three biggies between October 31st and December 25th. Halloween has always been my first love because it’s the one night a year you can truly be *anything* and no one really bats an eye. Plus, free candy. C’mon. Thanksgiving is the one day a year you can really spend time cooking and eating yourself into a food coma… and not feel guilty about it after lol. And Christmas, well, my birthday is 2 days before, my anniversary is 5 days before, and any holiday where I’m getting a gift is a bonus in my book. (Also, I’m a total Autumn/Winter fangirl… so… yeah.)

After narrating Desperately Seeking Sixty-Nine, would you consider narrating more titles by J.D. Frettier in her Green Room Chronicles?
Absolutely! It was a fun project and I’d love to see where the others go in the continuation of the series. 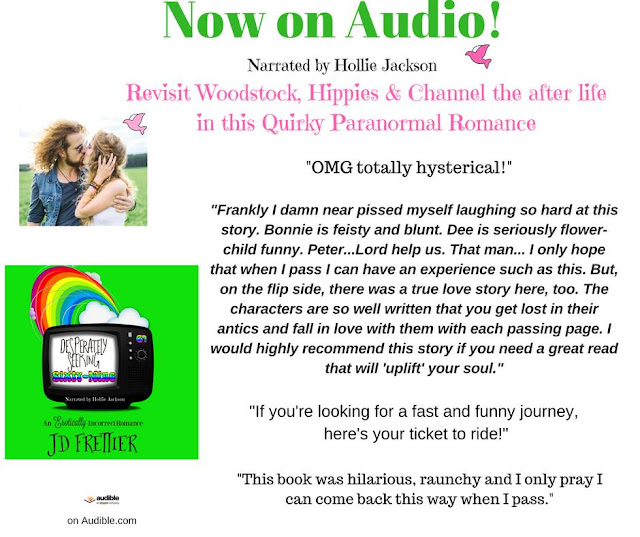 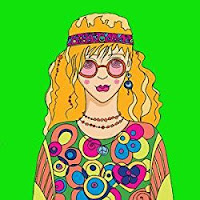 JD Frettier is the nom de plume of USA Today Bestselling Author Jennifer Theriot. Being a child of the 1960s and Woodstock era, she was elated when a quirky couple spoke to her, requesting their love story be told. It was an offer she couldn’t refuse, so she decided to venture into the world of paranormal via 'channeling' with her debut novella, Desperately Seeking Sixty-Nine. JD’s laptop and mind are now open to new characters. She’s already interviewed and selected one for the next installment of her Green Room Chronicles....so stay tuned! 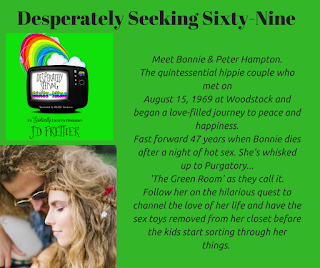