LOOK at ME! The Slayer Series by Vanessa Lieve #GIVEAWAY

THE SLAYER SERIES
by Vanessa Liebe

Dominic stepped outside and followed the girl down a path and deep into the garden. Amazingly he could sense no other humans out here making an illicit rendezvous. It was just he and the Slayer. She was safe, for now. Then he looked ahead and was shocked that he couldn’t see her anymore. The damn chit had vanished.

“Why are you following me?” a husky voice demanded from behind him.

Dominic had to admire her. The girl had been aware of him following her the whole time and had double backed to surprise him. He slowly turned around and faced the Slayer, liking what he saw. She was even prettier close-up. Holding up his hands to indicate that she was in no danger from him when nothing could be further from the truth, Dominic smiled. “I saw you come out here and wanted to warn you that you shouldn’t enter a garden at night on your own like this.” 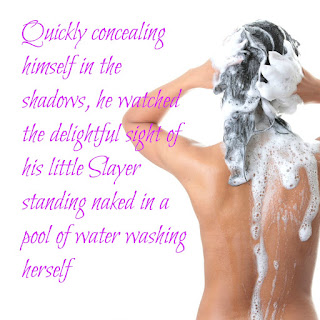 The raven-haired girl looked him over as if totally unimpressed by him. “I’m aware of the dangers,” she scoffed and Dominic’s lips twitched. It was tempting to uncloak himself again and see how the brazen chit reacted to a Master Vampire instead. “And I’m curious as to why you felt compelled to warn me. Who are you?” she asked rudely.

“The Marquis of Sandford, at your service.” He gave a mocking bow.

The chit merely blinked, before raising an eyebrow skeptically at him. “Well, my Lord. Thank you for your concern, but I came out for some fresh air and I wish to be alone,” she said, dismissing him.

Dominic couldn’t help liking her. She had guts and he wanted to talk a little more to see what other insults she would give him. He couldn’t let her go yet. He was enjoying the fact she had no idea what he really was. “Aren’t you going to tell me your name?” he asked when she was about to turn and walk away from him. “It seems only polite under the circumstances.”

“No.” She frowned when he laughed. “We haven’t been introduced by anyone and I don’t think…”

“Come now. Take pity on the gentleman who cared enough about your safety to warn you about the dangers of entering a secluded garden. Tell me your name.”

“I’ll have to be.” But he knew the girl had lied. No matter, he would discover her real name later.

She was about to turn from him again when he stepped closer and he enjoyed hearing her little gasp of astonishment. He also saw a fleeting flash of awareness in her eyes for him as an attractive male and it pleased him.

“You should be more careful of your reputation, Miss Smythe.” He stared at her mouth. Such plump, soft lips and they were begging for a kiss. Perhaps he should oblige.

“You’ve been avoiding me, Lady Emma,” he drawled, and his deep voice made her stomach quiver. Which was ridiculous. No male affected her. She swung around to face him.

“Yes, I have.” She wasn’t going to deny it, and she looked him over coolly as he lounged against the locked door with his arms folded over his broad chest.

“My family seemed to have welcomed you, but I don’t trust you.”

Emma didn’t need to explain herself, but she wanted him to know that she wasn’t scared of him or of any threat he might pose. The Elders may be different, though, and she wanted to know more about them from him.

“I’m sorry you feel that way.” Alaric sighed. “I’m sure your father has told you that I was sent to London to observe the Slayer’s family.”

She narrowed her eyes. “Oh, I know you were. And then you realized that it was my father who had married the Slayer, so you thought it was your chance to worm your way into our house and our life. Supposedly you’re no threat.” 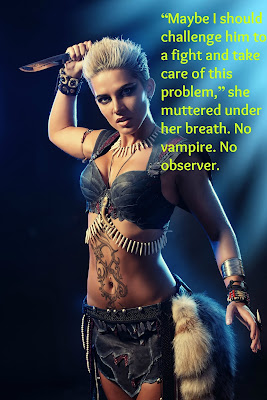 “Emma.” He eased himself off the door. “I am only an observer. I’m not here to harm you.”

“What about the Elders you’re reporting to?” she hissed at him, revealing her small fangs.

Alaric seemed taken aback by the sight of them. “Incredible. You have fangs.”

Emma retracted them. “I’m half vampire. Of course I have fangs.” She spoke to him as though he was a dullard. “Now, tell me about these old vampires.”

He stared at her for a moment longer as if transfixed and then shook his head. “Suddenly you’re interested in me?”

“Hardly.” She was quick to deflate his ego. “I’m interested in what you can tell me about them.”

She tensed when he took a step toward her.

“If I have to.” Emma frowned when he laughed. Didn’t he believe her? She’d taken larger vampires than him out and had no qualms about using force where necessary if it meant protecting her family.

Alaric looked her over, his green eyes lingering on certain parts of her body longer than others. “Are you going to pummel me in that pretty gown of yours?”

As an attempt to distract her it was pathetic. She wasn’t falling for that one. The second she looked down at her dress, he’d pounce on her. She smirked at him. “You’d be surprised what I can do in this gown.”

Heat flared in his eyes and she regretted her words, especially when he took another step closer. “I mean I can still fight perfectly well in it.” Damn him. It was just like a man to deliberately misinterpret what she’d said. And she could fight in a gown. Combined with her other powers she was pretty lethal in one, but he didn’t need to know about those yet. Keep your enemy wondering was her motto. She’d only use them if he didn’t start talking soon.

“Do you normally beat up your father’s guests?” he inquired in a lazy drawl as he took yet another step closer.

Emma gulped. He was getting far too close for her comfort and would end up forcing her hand. Determined to get that information, though, she lifted her chin. Nobody mocked her. “Only the inconvenient ones.”