RELEASE BLITZ: Once Upon a Midnight {Boxset to raise funds for Epilepsy}

ONCE UPON A MIDNIGHT 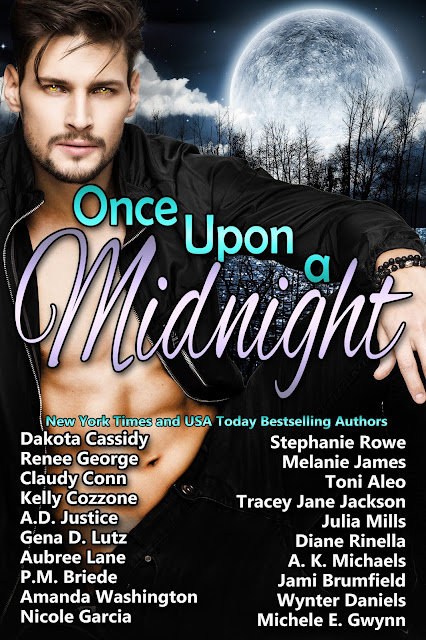 Just in time for Halloween

20 New York Times, USA Today & Amazon Bestsellers deliver one sizzling anthology to meet all your romantic heat requirements. Jam-packed with alpha males, paranormal hotties, vampires, werewolves, shifters, Greek Gods & More. This limited edition set is sure to be THE box set of the year, so don't miss out! 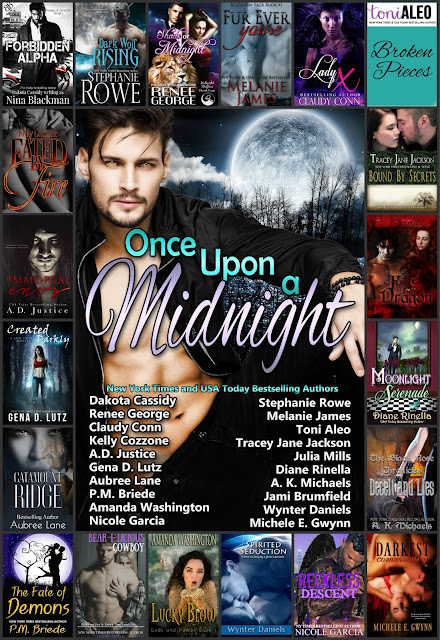 Stephanie Rowe - Dark Wolf Rising (Heart of the Shifter)
Shifter Cash Burns vanished from her life ten years ago, but when an assassin closes in on Brynn McKenzie, Cash is her only chance to stay alive.

Renee George - A Shade of Midnight (Midnight Shifters Book 4)
With the lives of her two loves on the line, will Mina be forced out of the light of her new life and back into the shade of her past?

Melanie James - Fur Ever Yours
The Fates etched Rafe & Mina's destiny in stone long ago. Now, one twisted wolf seeks to destroy them both. Will he succeed or will Mina and Rafe's bond be strong enough to survive?

Claudy Conn - Lady X
Lady X has to escape her Dark Warlock father. To do so, she travels into the past and slams into a hunky wizard with an agenda.

Toni Aleo - Broken Pieces
From the moment Oceanus von Stein, second-in-command to the Patchwork family, caught sight of Taegan Conner, daughter of the leader of the Wolves, he knew he would never love another. Only now, she has been promised in marriage to another, an arrangement to strengthen her family's alliances--and she gets no say in the matter. Can they find a way to be together, or will they both always be two Broken Pieces?

Kelly Cozzone - Fated by Fire
Gareth Cadell fights to save the survival of his red dragon clan. He -didn't expect to find his soul mate in the process. Can he end up saving them both?

Tracey Jane Jackson - Bound by Secrets
Brodie has waited centuries for his mate and Payton is more than he could have ever expected, particularly when she challenges him at every turn.

A.D. Justice - The Grudge
Two brothers. Best friends. Immortals. One woman - the subject of their mutual obsession. Immortals can hold a grudge for a very long time.

Julia Mills - The Fate of Her Dragon
Sleepless nights, a man haunting her every thought, his voice calling, begging, needing...her...
Not even the Universe has the answers and time is running out...
The Fate of her dragon may be the death of them all!

Gena D. Lutz -- Created Darkly, a Kris Chase novel
Necromancer Kris Chase's purpose is simple. Blindly raise the dead for the primary elite, selfnecro-governed group, the Center. The problem is, she couldn't care less about what the Center expects from her. Instead, she is more content with snuffing out the life-force from every vile creature she can get her hands on; the same monsters her brethren indiscriminately create... for the right price.

Diane Rinella -- Moonlight Serenade
Instead of leading Dale to the woman of his dreams, a psychic guides him to a lucky charm--Glenn Miller's guitar pick. Does the key to Dale's happiness lie with the famous bandleader or the deceased rocker of the same name? Maybe the ghost in the grey fedora knows ...

Aubree Lane -- Catamount Ridge
Exactly what’s happening up on Catamount Ridge was a mystery, but with the mountain lions acting so strange, it fell Jessie and Derek to track down the elusive beasts. The cats odd behavior was troublesome, but Jessie has a bigger problem on her hands. For in the light of day, Derek seems far more dangerous than any normal mountain lion.

A.K. Michaels -- The Black Rose Chronicles, Deceit and Lies
The Black Rose is a highly trained assassin. Her newest assignment is the mysterious, enigmatic and deadly Vampire, Cassius Allarde and she has to decide if he warrants her execution. Will she survive her meeting with the mighty Vampire?

PM Briede -- The Fate of Demons
Her entire reality is threatened when Octavia Howard is forced to work with the one creature she fights to protect her home from, demons.

Jami Brumfield -- Bear-i-licious Cowboy
Ashlee has given up on love, despite her best friend's insistence that she get back into the game. When she is forced to attend a dating mixer she discovers a world that was hidden from her, a dangerous world full of supernatural creatures she never imagined were real. Tucker is an alpha bear more concerned with protecting his pack than finding a mate, but his goddess has other plans and forces him to choose a woman to call his own.

Amanda Washington - Lucky Blow
When an enslaved demigod earns her freedom, but loses the one thing that matters more, she'll have to join forces with an old flame and steal from a cast of powerful gods to get it back.

Wynter Daniels -- Spirited Seduction
Ryan's murdered sister's ghost appears to him to warn him that her friend Emily will be next. Emily shunned her psychic abilities after she became the target of a killer while working with the police years ago, but she can't ignore her friend's dire message from beyond the grave. Despite their differences, passion sizzles between the couple until sinister, unseen forces threaten to tear them apart forever. *previously published

Nicole Garcia - Reckless Descent
Will one fallen angel's drastic mistake result in spending the rest of his eternal life in damnation, or will he be set free from the shackles of Hell and finally experience the love he has always been waiting for?

Michele E. Gwynn -- Darkest Communion
Torn from his beloved by jealousy, and cursed to walk the night alone for eight-hundred lonely years, a dark and twisted love triangle comes full circle in Bucharest, Romania for a vampire, a gypsy, and the woman they both desire.