LOOK at ME! Family Illusions by Bess George 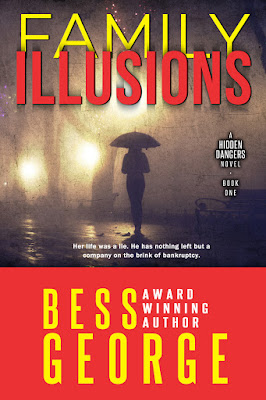 Jaxon’s brain shorted out when Charlie strutted across the dance floor using a wicked looking whip as a necklace. A heavy breath sawed from his lungs when she hooked one leg around a metal pipe that ran from the floor to the ceiling and exhibited extreme flexibility by arching over backward.

She glided away from the pole and faced the crowd. The seductive smile on her face held a hint of mischievousness and a lot of naughty. He dropped into an empty chair before he embarrassed himself by falling to his knees.

Her day-to-day clothes managed to cover up an excellent figure. In what Charlie was now wearing, or not wearing, she was magnificent. She didn’t have the large breasts of a typical stripper, but they were proportioned for her body. Enough to overflow a man’s hands. Everything male in him wanted to jump on the stage and wrap his jacket around her exposed body parts.

Tony stood beside him with his mouth dropped open. Jaxon’s breath became coarser, faster as he ground his back teeth together. He couldn’t do anything about the rest of the losers in the bar, but he could make his friend quit gawking.

He held up one hand to stop him. Nothing he said would help at this point. “Don’t.”

The spectacular performance was marred by a single misstep at the end when he expected her to fall face first into the audience. Who knew what she would do next? He moved closer to the raised area in case he needed to catch her. The song ended, and she headed backstage to loud clapping and whistling.

“Bring the big girl back,” an inebriated patron yelled and waved a fistful of dollars.

Jaxon clenched his fists and wondered if anyone would even notice him dropping dead from a burst blood vessel. Reaching the limit of his control, he swore to the heavens above, he would climb the stage and carry her out if she tried to do another number.

An hour later, he leaned against his truck and waited for her to appear. She walked out the back door and the bouncer said something to make her laugh. He knew the second she spotted him because her stride slowed to the shuffle of a naughty child.

✯✯✯✯✯Family Illusions is the first book in the Hidden Dangers Novel series by Bess George. Ms. George skillfully delivers a story filled with intrigue, suspense, romance, action, family secrets, and mystery. As you read the tension and drama within the plot are palpable. The characters are well developed within a tightly woven plot and an undercurrent of unanticipated twists and turns. Imagine being raised as an illegal immigrant living in the shadows even though you are actually a natural born citizen. That is the life Charlie lived. What information has been hidden? Why? Who is El Diablo and why did her mother fear him? As Charlie embarks on her adventure and search for answers she wants to become a part of a private detective firm, McKenzie Investigations, now owned by an adopted half-brother through adoption.
As Charlie learns more about her past and future life a hidden, extremely dangerous enemy lurks close by. This a book that I highly recommend and I can't wait to read the next book in the series as there are many directions Ms. George can take this series. A must read for everyone who appreciates a superbly written romance suspense thriller. ~ Servedogmom via B&N

✯✯✯✯✯Bess George has delivered us a wild ride with her first novel in the Hidden Dangers series. After taking some of the hairpin curves, you become quickly addicted to the rush it delivers. Not to worry, there are more books to come, so this is an easily satisfied addiction, with no side effects other than the waiting period for more.
When the heroine, Charlie, was younger, she adored her mother, but was always quietly disturbed by her behavior. Paranoia and fear were the other two elements in her young life, leaving a tarnished feel to her memories.
The hero, Jackson enters her life after she's grown, making his debut in a very unusual way, bringing with him, attraction and distrust at the same time. Delivering more mixed feelings for our heroine to wade through.
This story draws you in with its human element, then picks up speed and leaves the reader driving blind through the underbelly of Houston. Family Illusions is definitely what you'll find in this suspenseful work. Nothing is as it seems. Not family. Not friends. And definitely not the illusion and lure of the streets in the city that speaks to us during rocket launches. Bess George has shed light on this invisible situation, and left us with no illusions, for Houston, or any of the other large cities. ~ Loretta Wheeler via Amazon