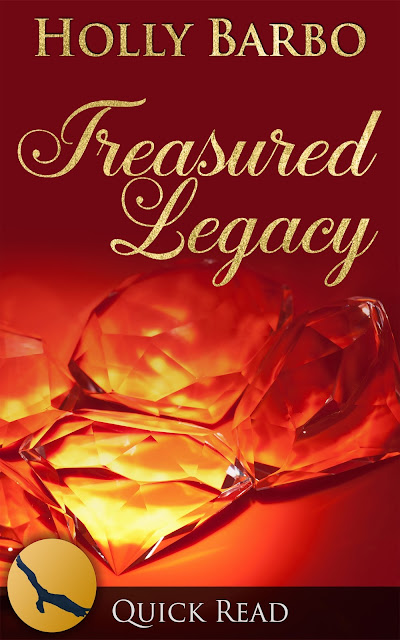 With dwindling time, Leone uses the last of her strength to share important family history with her only living relative: her grandson David. Despite her final request to not sell the family heirlooms, David and Anne look into it because of their desperate need for money. But the pieces have secrets and the young couple finds themselves in unexpected danger.

The old woman pulled the warm shawl around her shoulders with frail, liver-spotted hands. Reaching for her cup of tea, she took a sip. The cup rattled in the saucer as she set it down on the side table and looked up at the young man who was setting up the small electronic device.
“Thank you for doing this for me, David. You are the last of my family and I wanted you to know about your history and ancestry.”
He smiled and tucked the colorful afghan over the elder’s lap and feet. “Are you comfortable, Grandmother?”
At her nod, he sat near the video camera and raised his hand to float above it. “Let me know when you’re ready.”
Her faded eyes twinkled. “Start it. I have stories to share, and there isn’t much time on my end.”
With a wink, his finger brushed the start button and he sat back to listen.
“Our family has several heritages. Thirty years before the terror of the French Revolution, a talented gypsy silver smith named Silas Rose married a daughter of a Jewish jeweler named Boehmer. In the next twenty-five years, the two worked together and gained fame for the remarkably skilled pieces they crafted. Their work came to the attention of Louis XVI and later of Marie Antoinette. It was an unfortunate situation. A very expensive necklace had been commissioned…”
***
The bell above the door tinkled as the young man entered the ornate jewelry shop. An old gentleman stepped out from the back, his face breaking into a grin at the sight of his visitor. “Valentine! It is good to see you! Come in and tell me of your journey. Are Silas and Rebecca with you?”
The dark-haired youth shook his head, his expression solemn. “Is it time to close the shop for the day, Grandfather? I have much to share with you.”
For a long moment, the grey-haired man studied his grandson’s face. “Lock the door and pull the curtains. I’ll get the wine out of the cellar.”
Turning from his task of securing and barring the door, Valentine called over his shoulder, “I brought whiskey. Just get the glasses.”
Taking his bottle to the workroom, he helped his grandfather, Antoine Boehmer, to put away several partially completed projects into the safe. They finally settled in some chairs by the fireplace. Valentine poured two glasses and passed one to the older gentleman.
“No one wants to buy that necklace. They think it’s cursed. First there is the taint of King Louis XV commissioning the piece for Madame du Barry but dying before he could pay for it. Add to that Marie Antoinette refusing it…twice.” The young man shook his head. “The fiasco and scandal with the cardinal and Jeanne de la Motte has sealed the issue. No one will touch it. Father was able to sell several of the stones to jewelers in Amsterdam and that netted 1,000,000 livres. It doesn’t pay for your craftsmanship but it compensates us for the stones.” He handed over the packet of remaining gems and money.
“You traveled the roads of France and the streets of Paris carrying this? Mon Dieu! You could have had your throat slit! This is a king’s ransom for ninety percent of the people!”
“I was with Mother and Father on the ship. I left them in Le Havre as neither were feeling well. They urged me to see you right away. I was also eager to return to Jaelle before she gives birth.” He gestured to his travel-stained appearance. “I purposely didn’t clean up and wore my oldest clothing.” Valentine stood and looking down at his soiled presentation, made a grimace of disgust. “I need to stop and bathe, then it is off for home.”
“I’ll have Margaux prepare a bath for you. While you are waiting I must show you some special pieces of furniture that were made for me. Jean Henri, a German fellow named Roentgen and I collaborated on their design. Jean wanted to gild everything like his pieces in Versailles, but I talked him down to using beautiful marquetry instead…” 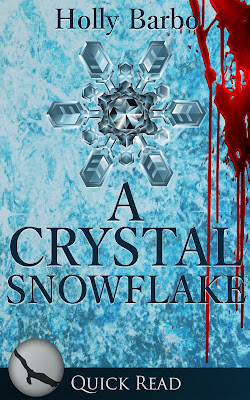 When Chayse’s friend is murdered before he can get protective custody, she and her department in Homeland Security are thrust into a race to stop a destructive cyber worm from wiping out all bank and stock market records during the Christmas break.
The good news is there is an inoculating code which will stop the worm. The bad news is it is hidden in a special crystal concealed in the sculpted walls of a beautiful ice hotel in the lapland region of Sweden and the terrorists are searching for it too.
As the snow flurries of November becomes frozen December each side rush to find the crystal…with entirely different goals. Will the Christmas holiday bring destruction for western financial systems?
A Crystal Snowflake is a contemporary thriller. It has been previously published in Tendrils, The Edge of Madness boxed set and Wrapped with a Bow boxed set. It was also entered in a story competition seeking cinematic quality stories for movie potential, and made the quarter finals.

Holly's world is shaped by her love of family, the beauty of the natural world and an irrepressible creative drive. She has always been curious and sees life through questions. These four characteristics color her writing voice and her stories frequently evolve from her asking "What if....?" Her tales tend to have non-urban settings with nature contributing to the plot, building discordant themes inside a seemingly peaceful refrain. Her motto: Weaving Alternative Worlds with Threads From Today.
AMAZON ✯ WEBSITE ✯ FACEBOOK ✯ GOODREADS ✯ PINTEREST ✯ TWITTER ✯ PGP AUTHOR PAGE ✯ PGP PINTEREST ✯ NEWSLETTER
Posted by From the desk of... R.E. Hargrave at 10/21/2016 02:30:00 AM