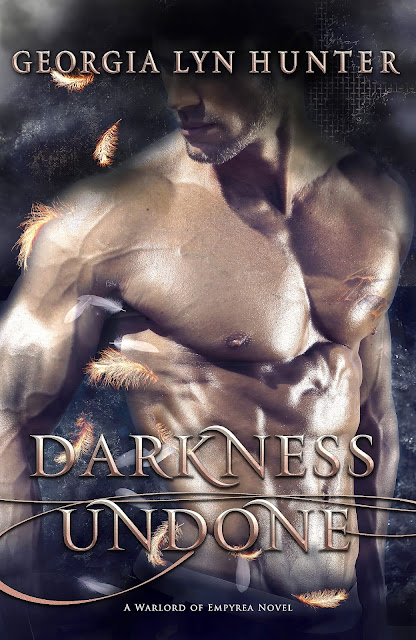 A fading realm, a warrior bound, and the woman who will save them both…
Bound to a vengeful goddess, immortal warrior, Reynner, has little time for the fairer sex. The last thing he wants is to be aligned with another female, even if she is the key to finding an artifact and saving his realm. But his stone-cold resistance is tested, his attraction undeniable for the feisty mortal, until she demands the one thing he cannot give her…his trust.
Eve Leighton avoids intimacy of any sort after an accident in her teens left her with a painful ability to see into another’s mind through physical contact. When an ice-cold warrior claims she is his world’s savior, she’s intrigued, until she dares a look into his soul and sees a man who’s been cruelly betrayed. She agrees to help him and loses her heart. But the man is an unassailable fortress. With quiet determination, she chips away his barriers and a passion darker than night pulls them under.
As his enemies closes in on the hunt for the artifact, Reynner must overcome his own personal demons as battles are fought to claim the woman he loves or lose her forever. And Eve has to face her own mortality and fight for a love of a lifetime.

The sudden hush in the busy little café should have been his first clue shit was about to fly.
Wrapped in his thoughts, Reynner savored his dark roasted coffee hot enough to scrape a layer off his throat, when he became aware of the unnatural quiet. Looking up, he got an eyeful of a tall female sashaying toward him, not in the least surprised she’d found him. Again.
Lustrous black hair framed a face of sheer perfection, one that made gods and men whimper for her favor. A long, fitted white dress with a slit up to her thigh hugged her body and fell to her ankles.
Oh, he understood the awed silence all too well since he’d once succumbed to that same sensual spell. Easing his grip on the mug, he set it aside, wishing he’d taken his coffee to go. A chair scraped on the linoleum opposite him. A moment later, her stiletto heel rode up his leather-clad leg to caress his inner thigh beneath the tablecloth.
He shoved her foot off him. In a measured move, he picked up a coin from the change on the table and spun it so he wouldn’t be tempted to reach across and strangle her.
“Get lost, Inanna. I'm busy.”
“Reynner…” She held out a hand in appeal, her topaz eyes luminescent with tears. “Don’t do this...”
Ignoring the Sumerian Goddess of Love and War hadn’t worked in the past, and certainly not now.
He cut her an implacable stare. “Don’t do what? Ignore you? Or prefer other females?”
Her face darkened at his mention of the women. “Why would you want these weak, pathetic creatures?” Her tears vanished as fast as they appeared. “I'm powerful. I’ll make it wonderful between us again.”
Reynner leaned back in the wooden chair and ran a cool, dismissive gaze over her stunning face and lush body. More flighty promises, but no hint of an apology for what she’d done to him. The thought would never have entered her narcissistic mind.
“I enjoy other women.”
“You lie.”
Reynner shrugged. Picking up the fallen coin, he worked it between his fingers. He just wanted coffee and a few minutes of quiet before he went back on the streets. Instead, he got her.
It should have felt good torturing Inanna, but he got no enjoyment, just a prolonged headache that had started over two millennia ago.
How could he have known then that stopping at the Sumerian pantheon would so irrevocably change his life?
“You’ve become cold and unfeeling. One little mistake and you're still making me pay.” Her sulky voice drew him back.
“One little mistake?” His tone made glaciers seem warm.
“It was just a teeny-tiny year—”
“A year?” His hands crashed on the table. The coin flew and disappeared beneath a chair. “It was a fucking century in Hell!”
Inanna jerked back and blinked. Several humans turned their way in curiosity.
“Your deception caught me unaware, never forget what I am,” he said, his warning clear.
Her eyes flickered. Not from fear, Inanna didn’t believe there was anyone more powerful than her, but with a gleam of sexual promise. She knew all too well what he was, and why she hounded him.
Empyreans were a race of beings as old as the celestial angels and just as powerful, but far more carnal.
She leaned forward and rested her arms on the table, her low neckline displaying an eyeful of cleavage. “I’ll make it up to you…” Her voice lowered to a smoky promise. “I’ll make you my consort.”
He’d rather be imprisoned in Hell again.
“You have a mate.”
“I am a goddess. I can do whatever I want. Come on, lover,” she wheedled. “It will be good between us again…then I’ll help you find what you seek.”
Reynner stilled, his instincts on alert. Did she know where the missing Stone was? But meeting her watchful gaze, he dismissed the thought. No immortal would know for sure. The damn thing hid from them all. Even if she could aid him, he would never accept her help. It always came with a price.
Reining in his irritation, he ignored her baiting and turned to take in the busy café.
The brunette waitress at the table farther down watched him from beneath her lashes while she served a customer. She’d been sending him all sorts of signals from the moment she’d set his coffee down. Ones he didn’t encourage since he had no interest in females as a whole. Besides, he knew what a jealous bitch Inanna could be.
A virulent hiss erupted from opposite him when she spotted the waitress. As if to prove his point, with a flick of her hand, the waitress flew backward, crashing into a table. Chaos erupted, drowning the female’s frightened cry. Two human males rushed to help her.
A cat-like smile curved Inanna’s mouth. But her eyes flared with ire as she played with the deep blue lapis lazuli stone set in intricate silver filigree around her neck. “Look at another human tart again, and I will hurt her.”
Of that, he had little doubt.

I’ve been creating stories from the moment I could string two words together. No matter the tale, it always has romance woven through them. Yes, I'm a hopeless romantic.
When I’m not writing or plotting new books, I like to read, travel, painting, or troll flea markets where I usually buy things I might never actually use because they're so pretty.
After working in a few jobs all art related, a chosen career as a fashion designer, then an art teacher, I finally found my passion four years ago: writing. There really is no other job I’d rather do.
Oh, and I live in the beautiful country of South Africa.
AMAZON ✯ WEBSITE ✯ FACEBOOK ✯ GOODREADS ✯ TWITTER