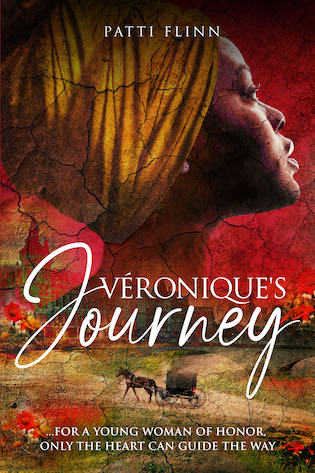 In 18th century France, the choices for a young black woman of modest means are slim.

Véronique Clair loves her parents and their small home in the countryside of Burgundy but dreams of using her talent for sewing and embroidery to make her own way, without having to rely on a man.

When Véronique’s well-meaning parents find her a suitor of elevated station their happiness turns into her despair. Véronique must make the difficult choice between agreeing to an arranged marriage–with its promise of elevated status in society–or embark upon an unpredictable journey across France and into a world she’s never known.

…for a young woman of honor, only the heart can guide the way.

The pastor began to speak but was interrupted as a former childhood friend of mine entered behind us, causing many of us to turn around and look. She was red-faced with embarrassment. Big with child and holding onto the hand of two small children on either side of her and sporting a freshly blackened eye. She held her chin up and hustled her babies into a seat as her husband came in behind her, his face a mask of arrogance, daring anyone to say anything. He took the seat beside his family, slouched in the chair like a pouting child.

I leaned to whisper to my mother, eyes still on the man. “He will beat or breed her to death. The bastard. When he was courting her he had nothing but fine words about how well he would treat her. Now she is stuck with him, forever.”

“Oui,” Maman nodded, her pretty features turned down in a frown. “It is a shame. He is angry that he is a married man…”