BOOK BLITZ: Out of the Ashes by Samantha Grosser #GIVEAWAY 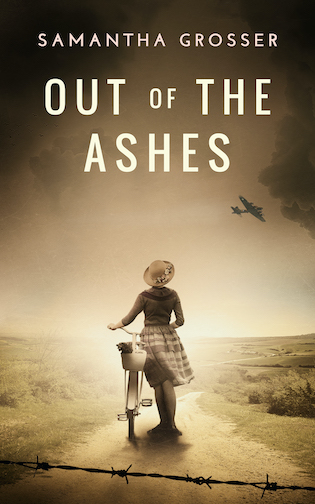 Amid the ruins of the Second World War, an illegal and tentative relationship begins.
England 1944. As Allied forces battle their way through Europe, German prisoners of war are sent to camps all over England. In a sleepy Somerset village, Clare is still grieving for her husband when the first prisoners arrive.

As the men start working on the farm, it isn’t long before she finds herself face to face with the enemy who made her a widow. Hating them all, she avoids them as best as she can. But when one of them saves a young child’s life, she is forced to reconsider. As an unexpected and illicit connection develops between them, her loyalties are stretched to the limit.

Their secret doesn’t last. Shunned by family and friends for illegal fraternisation with the enemy, Clare risks losing all she has. Then long-held secrets are brought to light and she must make an impossible choice.

In a world that has changed beyond recognition, can they find a way to build a future together, or will their happiness be destroyed by the burdens of the past?

She sat at the table, numb. She should have sweet tea, she thought, remembering it was supposed to be good for shock, but she was unable to bring herself to make the effort and the stove remained blank and unlit. She waited, expecting the numbness to pass and the pain of the grief to take over, but there was nothing. Her body felt as though it belonged to someone else, and her thoughts drifted, hazy and unformed. What was wrong with her? She had heard of other women collapsing with such news, weeping and hysterical. Why did she feel so empty?

She laid the telegram on the table and straightened it out against the tablecloth, letting her eyes wander over the brief impersonal notice again, Walter’s death contained within it. How could so few words hold such momentous news? A letter would follow, it said. But really, what more was there to say? She would never hear her husband’s voice again, nor hold him in her arms. Their son no longer had a father.

She let out a breath, unaware she had been holding it, and feeling began at last to creep through her veins, a hollow in her guts. She placed her hand on top of the telegram, covering the words. She had always known, she thought. Right from the beginning when he told her he was going she had known, and she had spent all her tears and anger then in bitter fights and cruel words she had regretted ever since. Now she would never have a chance to make up for saying them.

The memory of the last time she saw him flickered through her thoughts – the sadness in his eyes as he turned to walk away from her along the platform with the kitbag on his shoulder, a stranger in his uniform. She had watched him mount the carriage steps, squeezed his hand a final time, until with a hiss of steam and a whistle he was gone. She had known even then they would not meet again.

A dog’s bark outside in the yard roused her from her thoughts and she lifted her head towards the noise. The clock on the mantelpiece struck the half-hour. Soon Eric would be home and she would have to tell him that his father was dead. She shuddered at the thought of it and sighed, tracing the words on the telegram with her fingertips as though she might feel Walter’s presence within them – his warmth, his kindness, his laughter. The hollow inside her began to fill with pain, and her vision blurred with sudden tears. She pressed her hand against the sheet of paper under her palm. She would have to tell Walter’s mother too, she remembered then, and his sister and her husband, everyone else in the village. She would have to say it aloud.

She wrapped her thoughts around the words and tried to roll them on her tongue, but her mouth refused to form the sounds. Her breath began to catch in her chest and as she wiped at her face where the tears had started to fall, she cast a glance towards the door. She wasn’t sure if she could face it. It was the thought that she must say the words to others that finally broke her defences. Lowering her face into her hands, she began to weep at last. 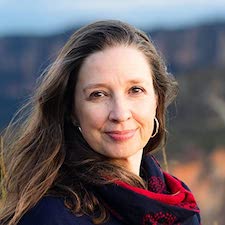 Samantha Grosser is a very British author who doesn’t function without tea. Having spent many years teaching English in Asia and Australia, she has now made her home on the sunny beaches of Sydney, Australia, where she lives with her husband, teenaged son, and a very small dog called Livvy.

She is the author of Another Time and Place, The Officer’s Affair, The King James Men, and the historical fantasy series Web of Witches. When she isn’t writing or reading, (which isn’t often) you can find her either doing yoga, going for long walks, or watching old movies.

You can find out more at samgrosserbooks.com