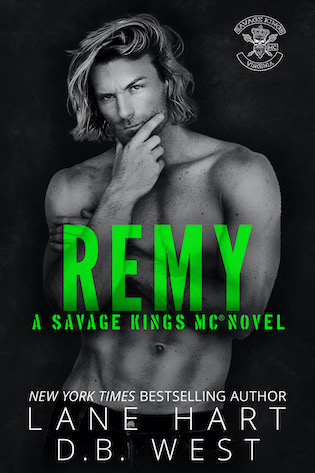 After two confidential informants are murdered by a drug lord the DEA has spent months trying to bust, agent Avery Carmichael is ordered to go undercover.

She’s going to need some help infiltrating the outlaw world, which is where the hottest, most infuriating man she’s ever met comes in.

Remy Fulton is the president of the newest Savage Kings MC chapter in Rockland, Virginia. When his younger brother RJ gets into legal trouble, he reluctantly agrees to help the prissy snob with her undercover operation to keep RJ out of prison.

Pretending to be the biker’s latest conquest may prove much more difficult than Avery anticipated. From the moment they meet, Remy argues with her over every little thing. He’s especially furious with her when he finds out she’ll be staying with him for weeks, sharing his home and his entire life.

Their friends and family can’t find out their relationship is fake because blowing their cover could inevitably put Avery’s life in danger.

It’s no secret that the two don’t initially trust or respect each other. But once they’re forced to improvise a few times under pressure, they become more comfortable playing the part of an infatuated couple.

The agent and biker ultimately get so good at being together that even they forget that they’re only supposed to be pretending as they attempt to set up the deal to take down a homicidal drug dealer.

Avery can’t seem to recall why she despised Remy in the first place since he’s proven to be a kind, caring man who would literally do anything to protect his family.

And while Remy didn’t want to spend a second with Avery at the beginning of the undercover operation, he suddenly doesn’t know how he’s ever going to let her go.

As I hurry around the corner, I choke on a thick wall of smoke. It’s all thanks to the Marlboro Man standing just out of sight around the turn. I have to walk past him to get to the federal building unless I want to jump out into the busy road. Seriously, all he’s missing is the cowboy hat. Coughing while waving my arm in front of my face, I try to make my way out of the cloud while mumbling to myself. “Great. Just great. Now I’m gonna smell like cigarette smoke the rest of the day!”

“Nah, there’s no way my cigarette smoke will overpower that rich-girl perfume you bathed in this morning,” his growly voice responds.

I turn around to face the smoker just as he tosses the stick down, grinding it into the cement with his big mud-splattered boot.

“You are going to pick that up, right?” I ask. Once the wind blows some of the smoke cloud away, I notice that the tall, scruffy man has holes in his jeans and a leather vest over his wrinkled tee. His only redeeming feature is a somewhat handsome face and pretty, true-blue eyes mostly hidden under long, grungy, dirty-blond hair.

The man lifts a single daring eyebrow. “What if I don’t?”

“You’ll be sorry if you don’t.” I peel my blazer back to show him the agency-issued gun in my shoulder holster and the badge clipped to my hip.

Now he gives me a smug grin. “I would love to see you try to arrest me, rich girl.”

I can’t help but glance down at my black pantsuit, red pumps, and matching red leather briefcase. “Wh-how do you know if I’m rich or not?”

“That Benz of yours is worth, what, about eighty or ninety grand?”

He saw me pull into the parking garage? How did I miss him?

“What I drive or how much I spend on a car is none of your business.”

“But my cigarette butt is your business?”

His scruffy, clenched jaw ticks while his boot continues to cover the butt. Our silent standoff ends when someone behind us yells, “Remy, let’s go!”

“Fuck,” the smoker grits out.

“Is that your daddy calling you or your attorney?” I ask him.

“Neither,” he grumbles before he finally bends down to pick up the butt and toss it in the trash bin. When he starts to pass me on the sidewalk, his intimidating size coming closer causes me to take two big steps back to let him pass without us touching. I hear his chuckle as he walks away. Sighing heavily, I follow him up the steps of the federal building, where two men dressed in the exact same attire are waiting at the top.

Oh my god. They didn’t accidentally wear the same clothes. No, this was intentional because they’re part of a motorcycle gang.

“You’re the bikers I’ll be going undercover with?” I ask the three men.

The smoker laughs full out so hard I’m surprised it doesn’t end with him coughing up a lung. “You’re going undercover? They’re out of their fucking minds.” 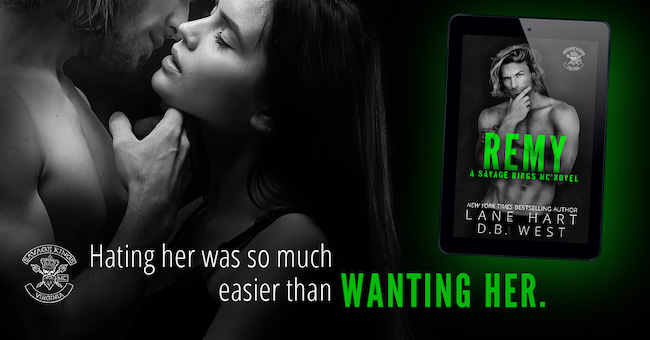 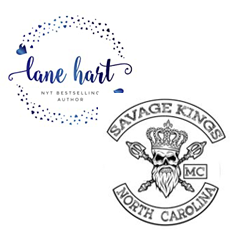 New York Times and USA Today bestselling author Lane Hart has more than forty steamy stories currently available on Amazon. Sign up for her newsletter to receive updates on new releases and free promotions by copying and pasting this link into your web browser:

Lane lives in North Carolina with her husband, author D.B. West, their two daughters, a few lazy cats and a pair of rambunctious Pomeranians. She has a Masters in Criminal Justice and spent ten years working as a paralegal for a criminal defense attorney before walking away to become a full-time writer.

In October 2015, the paranormal romance anthology Wicked After Dark, including her standalone, Let Him Reign, hit #13 on the New York Times bestseller list. Since then she's been climbing the Amazon charts with hot new releases. So whether you're looking for MMA superstars, hot cops, arrogant football players, sweet millionaires, or romantic weddings, there's a little bit of something for everyone.

USA Today bestselling author D.B. West was born and raised in the southern United States. While studying at the University of North Carolina at Greensboro, he met his wife and fellow author, Lane Hart. They now reside together with their two young daughters and their pets, a pair of Pomeranians.

After losing his father to a lingering illness, West began writing Awakening as a way to channel his emotions, and honor the memory of a true friend. In addition to writing, he enjoys video games, motorcycles, and traveling.