BOOK BLITZ: For the Win by Raine Thomas #GIVEAWAY 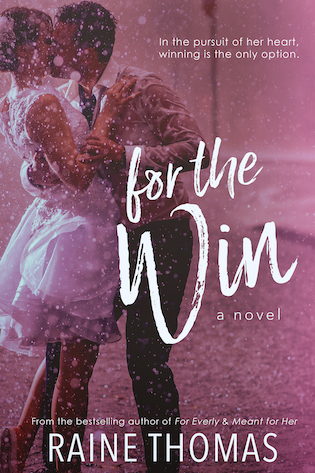 Determination.
It’s what gets Jasmine Li out of bed every morning. She’s determined to overcome the injury that has derailed her career in ballet, the only love she’s ever known. She can’t afford to allow a baseball player to distract her, no matter how hot and persistent he might be.
Commitment.
Will Campbell defines the word. It’s what makes him a successful pitcher and it’s helping him learn how to be a single dad to a little girl with plenty of trust issues. Just his luck, the one person his daughter—and his heart—finally respond to is a stubborn, sexy ballerina with plans that don’t involve relationships or children.
But Will didn’t become the best closer in the majors by giving up. He knows what he wants and what his daughter needs, and he’s going to get it. Jasmine Li has met her match…and he’s playing for the win.

Goodreads / Amazon / Barnes & Noble / iBooks
—
EXCERPT:
The strains of some kind of classical music reached Will before he entered the room. He didn’t immediately see Katie and Jasmine. When he reached the chair he’d pulled down for himself, he saw them standing at the barre, facing the mirror.
He was pretty sure his eyes nearly plopped out of his head.
Jasmine was performing a standing split. Her long legs, now covered in tights rather than the baggy pants, made one straight vertical line. Her right hand grasped the barre while her left hand grasped her calf in the air, leaving her torso curved in an elegant arch.
“So that’s the second position stretch,” Jasmine said, lowering her leg. “But as I said, that will come later. Our barre work will be much more basic to start.”
She spotted him as he dropped down into his chair. He did his best to close his gaping mouth.
“All done?” she asked.
“Yep.”
Thank God she didn’t ask him anything else. He wasn’t sure he’d be able to find his voice again.
Jesus. She was magnificent.
There was no doubt Jasmine was a beautiful woman. She had dark, lustrous hair, a flawless porcelain complexion, high cheekbones, and almond-shaped brown eyes that hinted at Asian heritage somewhere in the mix. She was lithe and slender, her every movement a study in grace and precision.
And she had fucking killer legs.
Sure, she was beautiful. But now…good lord. Those tights and that leotard showed him just what her baggy clothes had been hiding. Combined with the refinement of her movements, it had his body responding in a completely unexpected way.
Which was crazy, he told himself, since her poise and control were the two traits he had initially disliked about her the most.
Life could sure be ironic.
He shook off his reaction and returned his focus to the lesson, doing his best to look only at Katie. He pulled out his phone and used his camera, both to take pictures and capture some video. His dad was going to want to see them later.
The lesson went over the hour by nearly twenty minutes. Will hadn’t even registered how much time had passed. Having the opportunity to watch his daughter learn something that made her happy had the time passing in a blink.
“I know going through the moves and positions is repetitive,” Jasmine said as she and Katie sat to change their shoes. “But these are building blocks to learning routines.”
Katie nodded sagely. It had Will’s lips twitching in amusement, especially when he observed how she was mimicking Jasmine’s posture and mannerisms.
“It seems you enjoyed yourself, huh, kiddo?” he said, walking over to her and giving her bun a gentle tug.
She smiled and nodded.
“Would you like to do this again?” Jasmine asked her.
Another nod, this one more vigorous.
Jasmine also smiled. The genuineness of it made her attractive on a whole other level. It revealed to him that she wasn’t just polished, poised, and aloof. There was passion inside her just waiting to be ignited.
Five minutes later, he locked Giuseppe’s doors and walked with Jasmine to the back of the Jeep so he could load the barre for her. She reached past him to toss her gym bag into the back and he caught her scent, something lightly floral and utterly feminine that once again made his libido take notice. And when she reached up, untwisted her hair tie, and released her glorious dark hair so it spilled down between her shoulder blades, there was even a moment where he forgot how to breathe.
“Call or text me when you’re ready to schedule another lesson,” she said as she closed the Jeep’s rear hatch.
“Sure,” he managed. Then, remembering he hadn’t paid her, he reached into his back pocket and pulled out his wallet. He handed her the hundred dollars plus an extra twenty for the additional time she’d given them. “Thanks again for doing this.”
“It was my pleasure.”
He and Katie waved her off and then climbed into his truck to head home. As he started the engine and backed out of the parking spot, he took a moment to reflect on how the lesson had gone.
He had started it with serious reservations about working with Jasmine because he hadn’t thought she would be invested in Katie, and he quite frankly hadn’t liked her very much. Now here he was ninety minutes later, having serious reservations about working with her for the exact opposite reasons.
He wasn’t at all sure what to do about that. When he’d come up with this idea, he’d had some expectation that he’d have to help protect Katie’s heart from being broken if this didn’t work out.
What the hell was he going to do to protect his own? 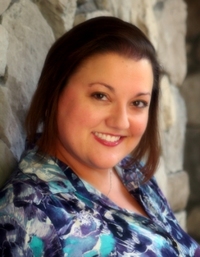 Raine Thomas is the award-winning author of bestselling Young Adult and New Adult fiction. Known for character-driven stories that inspire the imagination, Raine has signed with multiple award-winning producer Chase Chenowith of Back Fence Productions to bring her popular Daughters of Saraqael trilogy to the big screen. She's a proud indie author who is living the dream. When she isn't writing or glued to e-mail or social networking sites, Raine can usually be found vacationing with her husband and daughter on one of Florida's beautiful beaches or crossing the border to visit with her Canadian friends and relatives.
Website / Goodreads / Facebook / Twitter / Instagram / Bookbub / Amazon / Pinterest