BOOK BLITZ: To Kill a Fae by C.S. Wilde #GIVEAWAY 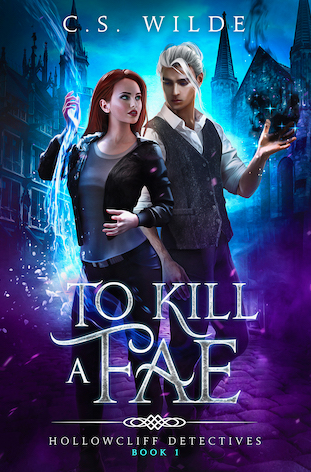 Fae enjoy playing dangerous games…
In detective Mera Maurea’s experience, three things motivate a murder: secrets, convenience, or passion. But none of the three can explain why the Summer King is dead.
With a tight deadline hanging over her head, Mera has to figure out who’s the culprit before the frail balance that holds the nation of Tagrad together crumbles into dust.
To aid her—or turn her life into a living hell, hard to tell which—is her fae partner Sebastian Dhay, a snarky detective with a penchant for the illegal. He’s a volatile wild card who will do anything to solve the murder, even if it means his doom.
The clock is ticking. And Mera is hiding a deadly secret of her own.

Goodreads / Amazon
—
EXCERPT:
Bast began unbuttoning his vest and nodded to a door close to the kitchen. “You can sleep in my bedroom.”
Mera barely recorded what he’d said. She couldn’t take her eyes off him.
He threw the vest on the sofa and proceeded to unbutton his shirt, a burning dare in his eyes.
Mera took in his strong, defined abs, and a delirious warmth went down her spine.
He tossed the shirt atop the sofa too, showcasing his perfect chiseled torso and strong biceps, meant to wrap around a woman as she rode his…
“Enjoying the show, are we?” He began undoing his belt, his deceiving, sharp eyes burning with lust.
Mera’s throat was so dry it might be made of sand. “I…”
Noticing the massive bulge underneath his black boxer briefs, she stepped forward. She wanted, needed, to touch that part of him; lick it, hold it, shove it inside her until…
No!
This was wrong. He was her partner, at least for the time being.
“Stop being a dick, Detective Dhay.” Grasping her bag, she hurried into the bedroom, slamming the door closed behind her. 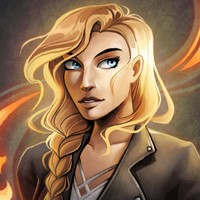 
C.S. Wilde wrote her first Fantasy novel when she was eight. That book was absolutely terrible, but her mother told her it was awesome, so she kept writing.
Now a grown-up (though many will beg to differ), C. S. Wilde writes about fantastic worlds, love stories larger than life and epic battles.
She also, quite obviously, sucks at writing an author bio. She finds it awkward that she must write this in the third person, and hopes you won't notice.